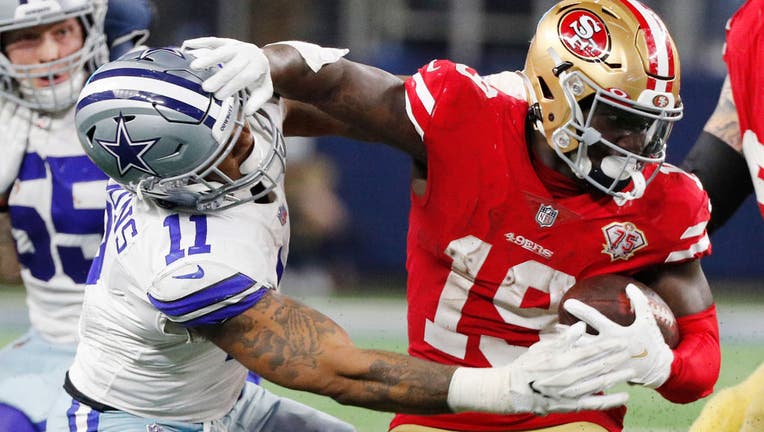 ARLINGTON, TEXAS - JANUARY 16: Micah Parsons #11 of the Dallas Cowboys attempts to tackle Deebo Samuel #19 of the San Francisco 49ers during the fourth quarter in the NFC Wild Card Playoff game at AT&amp;T Stadium on January 16, 2022 in Arlington

ARLINGTON, Texas (AP) - If only the Dallas Cowboys could get a do-over on this game.

Like they did for the punt that hit the huge video board looming high above the field. And like they desperately needed to on the final sequence in a 23-17 wild-card loss to San Francisco on Sunday.

Even after getting one more chance, the Cowboys ran out of time.

In the final minute, San Francisco was forced to punt after All-Pro Deebo Samuel's run initially was ruled to have picked up a first down before a video review showed he was inches short. Then the 49ers' All-Pro tackle, Trent Williams, was penalized for not being set on Jimmy Garoppolo's successful sneak for the first down, and the 49ers instead had to punt.

Dallas got the ball at its 20 with 32 seconds remaining. Dak Prescott completed three consecutive passes, with the receivers getting out of bounds each time, and there were 14 seconds left when he ran 17 yards to the 49ers 24. But the ball never got set for another play before time ran out, even though the quarterback did spike it.

And the football world will ask why run the ball with so little time and no timeouts remaining.

The 49ers needed a frantic comeback a week ago to beat the Rams and make the postseason. Now, they move on, while NFC East champion Dallas goes home yet again. 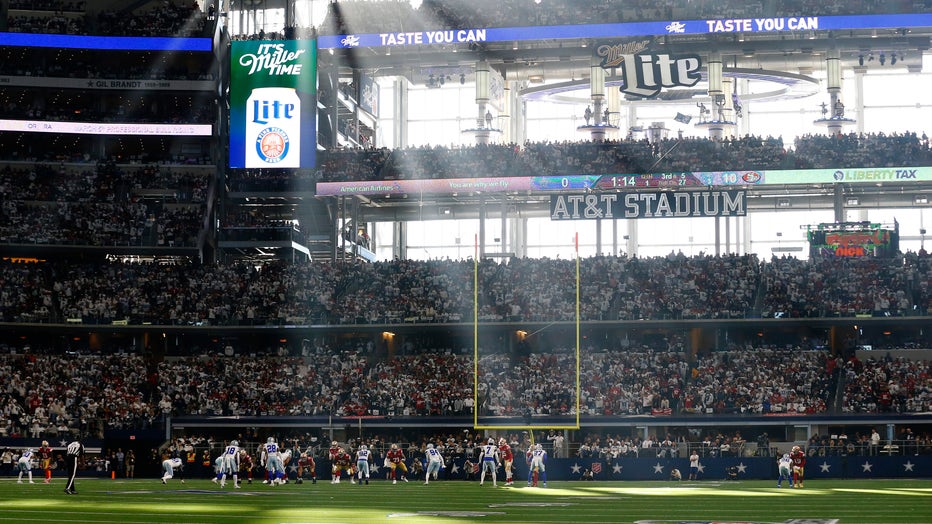 A general view a the game between the San Francisco 49ers and Dallas Cowboys in the NFC Wild Card Playoff game at AT&T Stadium on January 16, 2022 in Arlington, Texas. (Photo by Richard Rodriguez/Getty Images)

So much went wrong for the Cowboys before their comeback fell short. Such as the pass that whizzed by the head of open receiver Cedrick Wilson, who apparently never saw the ball looking back into the sun shining through the huge glass doors on the west end of AT&T Stadium.

These Cowboys are still a long way from where they were the last time they played San Francisco in the postseason -- in three consecutive NFC championship games in the mid-1990s. Since winning the Super Bowl at the end of the 1995 season, when they beat Green Bay in the NFC title game, the Cowboys haven't made it past the divisional round of the playoffs. They didn't even get that far this time, in their 11th postseason appearance since those three Super Bowl titles over a four-season span.

Dallas was down 16-7 in the closing seconds before halftime, and facing third-and-20 from midfield, when Prescott threw toward Wilson. While it still would have been short of a first down, a completion would have at least given Greg Zuerlein the chance to attempt a long field goal.

The Cowboys were fourth-and-20 to start the second half -- after consecutive false start penalties and a Prescott sack -- when Mark Nzeocha got a personal foul for roughing the passer.

Six plays later, punter Bryan Anger was back on the field and his towering kick ricocheted off the bottom of the massive board.

"This is very unusual," reference Alex Kemp said when announcing what happened, adding that it "amounts to a do-over."

Only that punt got to be redone. Dallas needed more.

After getting the most penalties in the NFL during the regular season, Dallas tied a season high with 14 in the playoff game. The last came with under two minutes remaining when defensive end Randy Gregory was penalized for holding on a running play.

On the Cowboys' second possession of the game, already down 10-0, Prescott hit CeeDee Lamb for a 32-yard gain into 49ers territory. But that third-down completion was wiped out by a holding call, and they punted a play later.

Another long completion to Lamb late in the third quarter was erased when he was penalized for an illegal shift. The Cowboys did recover from that one to get a 51-yard field goal from Zuerlein and make it 23-10. They got their last touchdown on a 5-yard scramble by Prescott to capitalize on an interception by Anthony Brown of a pass by Jimmy Garoppolo.

That was the only turnover forced by the Cowboys, who led the NFL with 34 takeaways in the regular season.

The Cowboys had won their previous three wild-card playoff games, all at AT&T Stadium since it opened for the 2009 season. They had then gone on the road and lost divisional round games, the last three years ago.

But things went wrong even before this game began, with Cowboys linebacker Leighton Vander Esch's name misspelled on the back of his No. 55 jersey when he came out for pregame warmups. The jersey had the "c" and "s" transposed in his last name, and he wore it throughout the game.