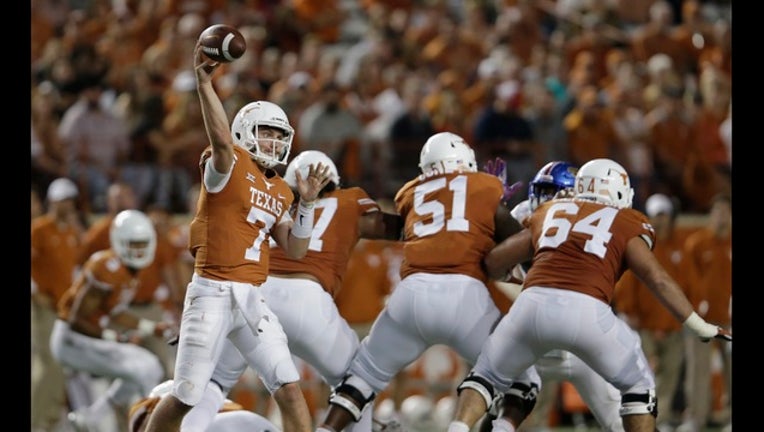 AUSTIN, TX - NOVEMBER 11: Shane Buechele #7 of the Texas Longhorns throws a pass in the third quarter against the Kansas Jayhawks at Darrell K Royal-Texas Memorial Stadium on November 11, 2017 in Austin, Texas. (Photo by Tim Warner/Getty Images)

AUSTIN, Texas (AP) - Texas is set at quarterback with Sam Ehlinger, who had a breakout season in 2018. It is the depth chart behind him that has suddenly become a concern for coach Tom Herman as the wave of players exploring their options to move has reached the Longhorns.

Experienced backup Shane Buechele entered the NCAA transfer database Thursday and could be playing somewhere else next season. Freshman Cameron Rising has left the team and plans to transfer. Another touted freshman backup, Casey Thompson, took to Twitter on Thursday to knock down a report that he'd told the team he'll be back next season and said he hasn't made up his mind.

Texas is just the latest program to be rattled by players eager to find a new place to play.

"It's the wide, wild world of free agency ... This is going to be the new norm," said former Arkansas and Mississippi coach Houston Nutt, an analyst for CBS Sports. "Is this good for football? I don't know, but I think that's just the way it's going to be."

There were some seismic quarterback moves across the college football landscape in recent days:

- Jalen Hurt's transfer from Alabama to Oklahoma, moving him from one consistent national title contender to another. The two programs met in the College Football Playoff this past season when Alabama beat Oklahoma.

- Georgia's Justin Fields, rated by some as the top recruit in the country in 2018, transferred to Ohio State, prompting Buckeyes backup Tate Martell to bolt for Miami.

Kendall will be eligible to play in 2019 as a graduate transfer. The same would go for Buechele if he transfers after earning his degree in May.

So just how big of a deal is a backup quarterback leaving anyway?

Ask Alabama, which needed Hurts to come off the bench to rally the Crimson Tide to a win over Georgia in the SEC championship game. Texas needed Buechele off the bench to beat Baylor and Iowa State last season when Ehlinger was injured in both games.

If Texas loses all three backups, it will be Ehlinger and no one else with even one college-level snap under their belt on the sideline next season.

In Hurts, Oklahoma gets a quarterback who led Alabama to an undefeated regular season in 2016 before losing to Clemson in the national title game. Hurts led the Crimson Tide back to the championship game before he was benched for Tua Tagovailoa and lost his starting job this season.

Buechele was the full-time starter at Texas in 2016 when he set numerous school freshman passing records. He started 2017 as the No. 1 but Ehlinger started several games and had taken over the job full-time by the start of 2018.

The flurry of high-profile transfers comes as several trends in football converge.

Elite quarterbacks come out of high school more ready to play than ever before. Many enroll in college in January to join their team for spring practice and be ready to compete for the starting job by the fall. That also puts them on the fast track to graduate early, allowing them to transfer without restrictions later.

The NCAA has made it easier for players to transfer. The so-called "transfer portal" is part of a rule adopted in 2018 that lets major-college athletes put their name on a list of players considering a transfer, without first getting permission from their current program. Any coach can contact the player to pitch their program as a good fit.

Transfer rules still require some athletes to sit out for a full academic year before playing again. Graduates can play right away, and players who haven't graduated can appeal to the NCAA to be immediately eligible. The NCAA has tweaked its guidelines for handling waiver requests and is granting more since a change was made last year.

That puts new power in the hands of the athletes over their careers.

The new transfer landscape will force coaches to reconsider recruiting strategies, and open a new round of recruiting players who want to transfer, Nutt said.

At Texas, Herman signed Rising and Thompson in the same recruiting class only to be faced with both of them considering leaving a year later. At his December signing day news conference, Herman said he expected all the quarterbacks on the 2018 roster to still be with the team in the spring.

A month later, Herman has already lost one, will likely lose a second and could still lose a third with the Feb. 6 signing day approaching fast.

"Do you save a scholarship because you might need to sign a kid later?" Nutt said. "It's hard. You need numbers and you need at least four (quarterbacks) on your roster because kids get hurt. Now there's quarterbacks leaving because they can see the writing on the wall."