'Our defense forces stand': Zelenskyy thanks US for continued support

Ukrainian President Volodymyr Zelenskyy thank the United States for its constant support amid Russia's invasion and said against all odds, Ukrainian forces still stand and "will never surrender."

WASHINGTON - Ukrainian President Volodymyr Zelenskyy said Wednesday that "against all odds" Ukraine still stands, as he paid a defiant wartime visit to Washington to thank U.S. leaders and "ordinary Americans" for their support in fighting off Russia’s invasion. He pledged there would be "no compromises" in trying to bring an end to the war.

Delivering an impassioned address to Congress aimed at sustaining support for his country's defense, Zelenskyy called the tens of billions of dollars in U.S. military and economic assistance over the past year vital to Ukraine's efforts to beat back Russia and appealed for even more in the future.

"Your money is not charity," he sought to reassure both those in the room and those watching at home. "It’s an investment in the global security and democracy that we handled in the most responsible way."

The speech to Congress came after President Joe Biden welcomed Zelenskyy to the Oval Office, saying the U.S. and Ukraine would maintain their "united defense" as Russia wages a "brutal assault on Ukraine’s right to exist as a nation" and pledged to help bring about a "just peace." 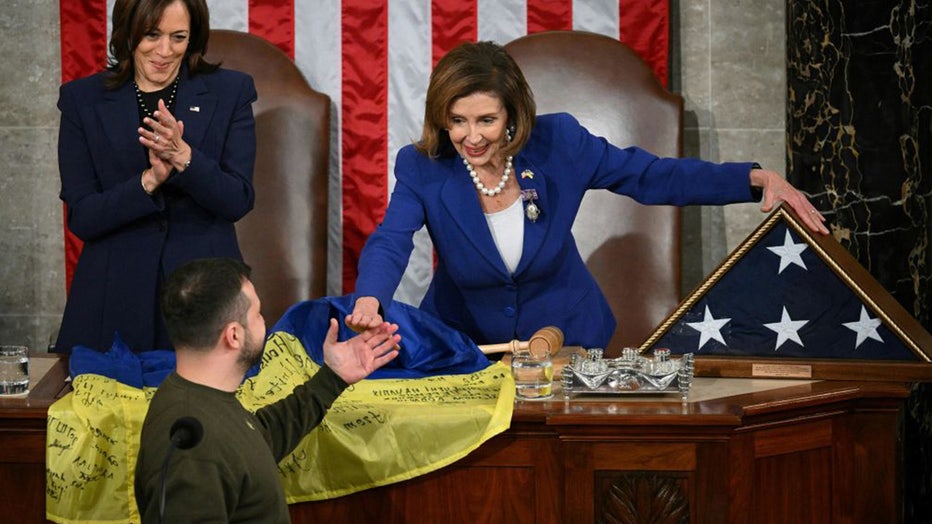 Zelenskyy, on his first known trip outside his country since Russia invaded in February, said he wanted to visit earlier and his visit now showed the "situation is under control, because of your support."

Speaking to lawmakers, the Ukrainian leader predicted that next year would be a "turning point" in the conflict, "when Ukrainian courage and American resolve must guarantee the future of our common freedom — the freedom of people who stand for their values."

Zelenskyy received thunderous applause from members of Congress and presented lawmakers with a Ukrainian flag autographed by front-line troops in Bakhmut, in Ukraine’s contested Donetsk province, which was held up behind him on the rostrum by House Speaker Nancy Pelosi and Vice President Kamala Harris. Pelosi presented him with an American flag that had flown over the Capitol that day.

Declaring that Ukraine "will never surrender," Zelenskyy warned that the stakes of the conflict were greater than just the fate of his nation — that democracy worldwide is being tested.

"This battle cannot be ignored, hoping that the ocean or something else will provide protection," he said, speaking in English for what he had billed as a "speech to Americans." 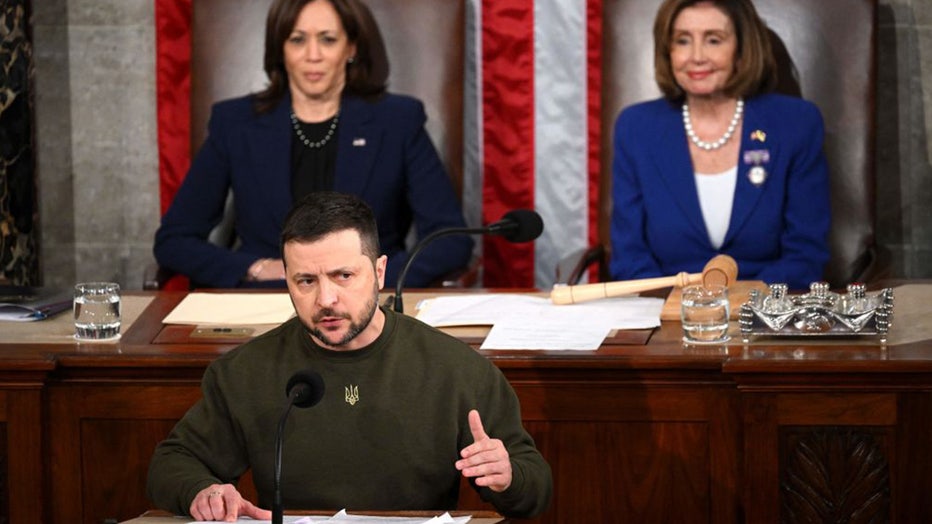 Ukraine's President Volodymyr Zelensky addresses the US Congress flanked by US Vice President Kamala Harris (L) and US House Speaker Nancy Pelosi (D-CA) at the US Capitol in Washington, DC on Dec.21, 2022. (MANDEL NGAN/AFP via Getty Images)

Zelenskyy appeared well aware of political divisions in the U.S. over prolonged overseas spending, and called on the House and Senate lawmakers to ensure American leadership remains "bicameral and bipartisan."

In a joint news conference with Biden, Zelenskyy was pressed on how Ukraine would try to bring an end to the conflict. He rejected Biden's framing of a "just peace," saying, "For me as a president, ‘just peace’ is no compromises." He said the war would end once Ukraine's sovereignty, freedom and territorial integrity were restored, and Russia had paid back Ukraine for all the damage inflicted by its forces.

"There can’t be any ‘just peace’ in the war that was imposed on us," he added.

RELATED: Russia warns of ‘consequences’ if US missiles are sent to Ukraine

The highly sensitive trip was taking place after 10 months of a brutal war that has seen tens of thousands of casualties on both sides and devastation for Ukrainian civilians. Zelenskyy's visit was meant to reinvigorate support for his country in the U.S. and around the world, amid concerns that allies are growing weary of the costly war and its disruption to global food and energy supplies.

Just before his arrival, the U.S. announced a $1.8 billion military aid package, including for the first time Patriot surface-to-air missiles, and Congress planned to vote on a spending package that includes about $45 billion in emergency assistance to Ukraine.

Russia, Biden said, is "trying to use winter as a weapon, but Ukrainian people continue to inspire the world." During the news conference, he said Russian President Vladimir Putin has "no intention of stopping this cruel war."

The two leaders appeared to share a warm rapport, laughing at each other's comments and patting each other on the back throughout the visit, though Zelenskyy made clear he will continue to press Biden and other Western leaders for ever more support.

'Continue to stand together': Zelenskyy, Biden speak together ahead of Congress address

Ukrainian President Volodymyr Zelenskyy and U.S. President Joe Biden spoke jointly during a press conference ahead of Zelenskyy's address to Congress on Wednesday.

He said that after the Patriot system was up and running, "we will send another signal to President Biden that we would like to get more Patriots."

"We are in the war," Zelenskyy added with a smile, as Biden chuckled at the direct request. "I’m sorry. I’m really sorry."

Biden said it is "important for the American people, and for the world, to hear directly from you, Mr. President, about Ukraine’s fight, and the need to continue to stand together through 2023."

Zelenskyy headed abroad after making a daring and dangerous trip Tuesday to what he called the hottest spot on the 1,300-kilometer (800-mile) front line of the war, the city of Bakhmut in Ukraine’s contested Donetsk province. He praised Ukrainian troops for their "courage, resilience and strength" as artillery boomed in the background.

Poland’s private broadcaster, TVN24, said Zelenskyy crossed into Poland early Wednesday on his way to Washington. The station showed footage of what appeared to be Zelenskyy arriving at a train station and being escorted to a motorcade of American SUVs. TVN24 said the video, partially blurred for security reasons, was shot in Przemysl, a Polish border town that has been the arrival point for many refugees fleeing the war. 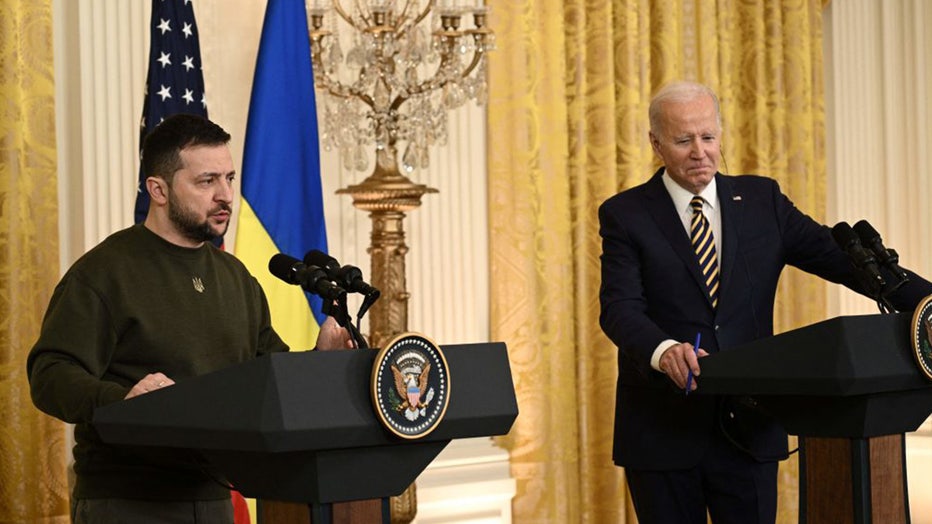 US President Joe Biden and Ukraine's President Volodymyr Zelensky hold a press conference in the East Room of the White House in Washington, DC, on Dec. 21, 2022.  (BRENDAN SMIALOWSKI/AFP via Getty Images)

Officials, citing security concerns, were cagey about Zelenskyy's travel plans, but a U.S. official confirmed that Zelenskyy arrived on a U.S. Air Force jet that landed at Joint Base Andrews, just outside the capital, from the Polish city of Rzeszow.

Biden told Zelenskyy, who wore a combat-green sweatshirt and boots, that "it’s an honor to be by your side."

U.S. and Ukrainian officials have made clear they do not envision an imminent resolution to the war and are preparing for fighting to continue for some time. The latest infusion of U.S. money would be the biggest yet — and exceed Biden’s $37 billion request.

Biden has repeated that while the U.S. will arm and train Ukraine, American forces will not be directly engaged in the war.

During their joint meeting in the White House, Ukrainian President Volodymyr Zelenskyy gives President Biden a cross for military merit. It was passed along by a Ukrainian Captain.

Biden and Zelenskyy first discussed the idea of a visit during a telephone call on Dec. 11, with a formal invitation following three days later, according to a senior U.S. administration official. Zelenskyy accepted the invitation on Friday and it was confirmed on Sunday, when the White House began coordinating with Pelosi to arrange the congressional address.

The White House consulted with Zelenskyy on security, including the risk of Russian action while he was briefly out of the country, said the official, who declined to detail the measures taken to safeguard the Ukrainian leader. The official briefed reporters on the condition of anonymity because of the sensitive nature of the visit. 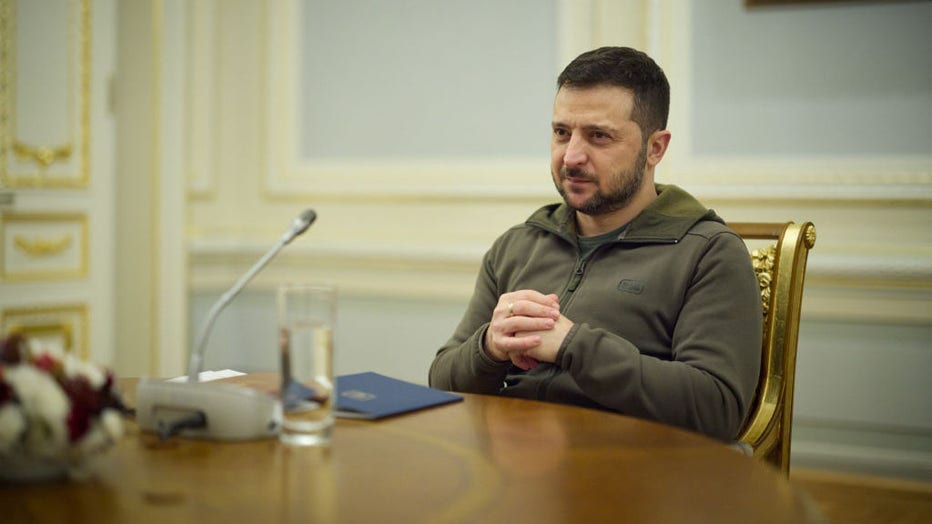 The latest U.S. military aid package will include not only a Patriot missile battery but precision guided bombs for fighter jets, U.S. officials said. It represents an expansion in the kinds of advanced weaponry intended to bolster Ukraine's air defenses against what has been an increasing barrage of Russian missiles.

Russia’s Foreign Ministry has said the delivery of the advanced surface-to-air missile system would be considered a provocative step and that the system and any crews accompanying it would be a legitimate target for Moscow’s military. 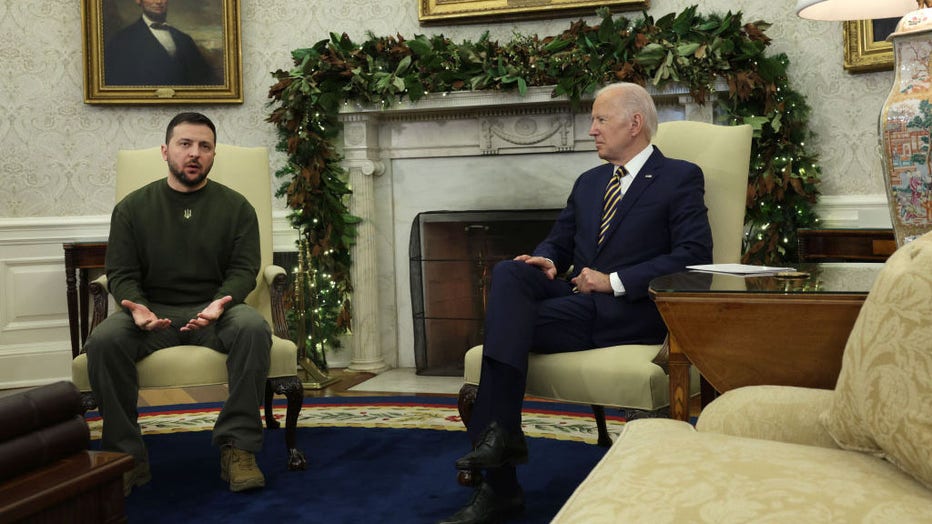 It was unclear when the Patriot battery would arrive on the front lines in Ukraine, given that U.S. troops will have to train Ukrainian forces. The training, expected to be done in Germany, could take several months, the Pentagon said Wednesday.

The visit comes at an important moment, with the White House bracing for greater resistance when Republicans take control of the House in January and give more scrutiny to aid for Ukraine. GOP leader Kevin McCarthy of California has said his party will not write a "blank check" for Ukraine.

Senate Majority Leader Chuck Schumer opened the chamber's session by saying that passage of the aid package and confirmation of the new U.S. ambassador to Russia, Lynne M. Tracy, would send a strong signal that Americans stand "unequivocally" with Ukraine. Tracy was confirmed later on a 93-2 vote.

According to FOX News Senior Congressional Correspondent Chad Pergram, "Fox is told that Ukrainian leaders Zelenskyy physically coming to Capitol Hill tomorrow night for Joint Meeting of Congress in the House chamber." This will be Zelenskyy's first public appearance outside of Ukraine since the Russian invasion. Previously, all of Zelenskyy's public engagement have been virtual.

With the fighting in the east at a stalemate, Moscow has used missiles and drones to attack Ukraine’s power equipment, hoping to leave people without electricity as freezing weather sets in.

Volodymyr Fesenko, head of the Kyiv-based Penta Center think tank, said Zelenskyy’s visit to the U.S. "should determine the course of the war — Zelenskyy for the first time dared to leave Ukraine and is counting on being able to maintain, and possibly even strengthen, U.S. military and economic assistance."

Ukrainian president Volodymyr Zelenskyy has been named Time Magazine's 'Person of the Year' for 2022. LiveNOW from FOX's Josh Breslow spoke with Political Science Professor Mikhail Alexseev for some insight into the reasoning behind that.

Putin on Wednesday told his country's military leaders that Russia will achieve its stated goals in Ukraine and use the combat experience to strengthen its military. His defense minister, Sergei Shoigu, said Russia's military must be expanded from the current 1 million to 1.5 million during the fighting in Ukraine.