A pregnant woman shot in the abdomen during a gun battle as she left church is sharing her story of survival and introducing her newborn son.

DALLAS - A pregnant woman shot in the abdomen during a gun battle as she left church is sharing her story of survival and introducing her newborn son.

Victoria Omisore knows just how easily this could have been a much different story.

The mother of three said their survival is miraculous and it shouldn’t be overlooked that her courage, literally under fire, helped save other young lives.

The 32-year-old is back at Praise Assembly Church in Northeast Dallas for the first time since Sunday May 30. This time, she’s with her precious 10-day-old son in tow.

"I remember everything," Omisore recalled.

Surveillance pictures show two men in a parking lot shootout as she was leaving with her two toddler daughters. She was pregnant at the time, within days of her due date.

As bullets were flying, she tried to shield her two girls and a friends two kids.

"I saw those guys, they were shooting," she said.

Then, an unmistakable feeling as she was shot.

"I just felt the blood gushing out, I was like, ‘Ooooh,’" she recalled. 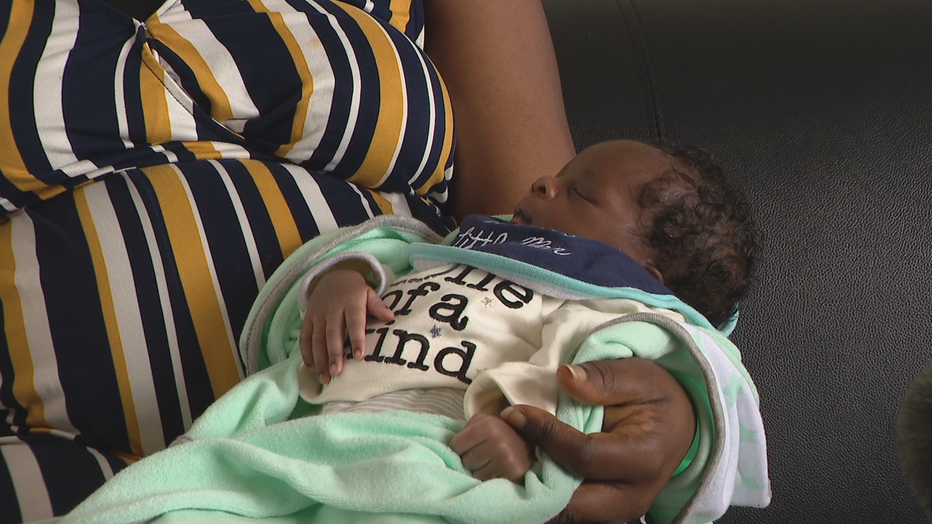 Even she can’t explain her clarity of mind.

The bullet entered her abdomen, not only missing the baby — who was immediately delivered — but somehow missing major organs and bone, lodging in muscle.

Doctors determined it was safer to leave the bullet, rather than remove it.

"I need to heal fast so I can take care of my kids," she said.

Omisore said her family immigrated from Nigeria four years ago for a better life.

Never imagining she and her children would become the victims of violence leaving church in her adopted country.

"They didn’t hurt themselves, they hurt another person, which is me," she said.

But she remains grateful for her life and those who’ve stepped up to help as she stares adoringly at the face of this tiny, perfect, little person, who she named Marvelous.

"What God did for me that day, I said oh no, indeed, God is marvelous" she added.

FOX 4 reached out to police for an update on the investigation, and were referred back to their original blog post from the day it happened, asking the public for help identifying the shooters.