A New Hampshire woman said she was taken by surprise when decorations she placed on her son’s grave depicting a skeleton popping out of the ground were removed and placed in the trash.

FRANCESTOWN, N.H - A New Hampshire woman said she was taken by surprise when decorations she placed on her son’s grave depicting a skeleton popping out of the ground were removed and placed in the trash.

No one knew Christina Wohle’s son better than her, and she said no one knew her son’s sense of humor better than she did. Wohle found it troubling that the skeleton decorations she put on her son’s grave to honor his funny and bright spirit were removed multiple times and eventually placed in a nearby trash bin.

In 2016, Wohle’s son, Cole, died of a sudden heart attack following a rodeo event he participated in, just days after his 18th birthday. Now, Wohle says she and her family decorate Cole’s “new home” for every holiday. For Halloween, she said she found a bag with a skeleton that looked like it was popping out of the ground and thought her son would find it funny. 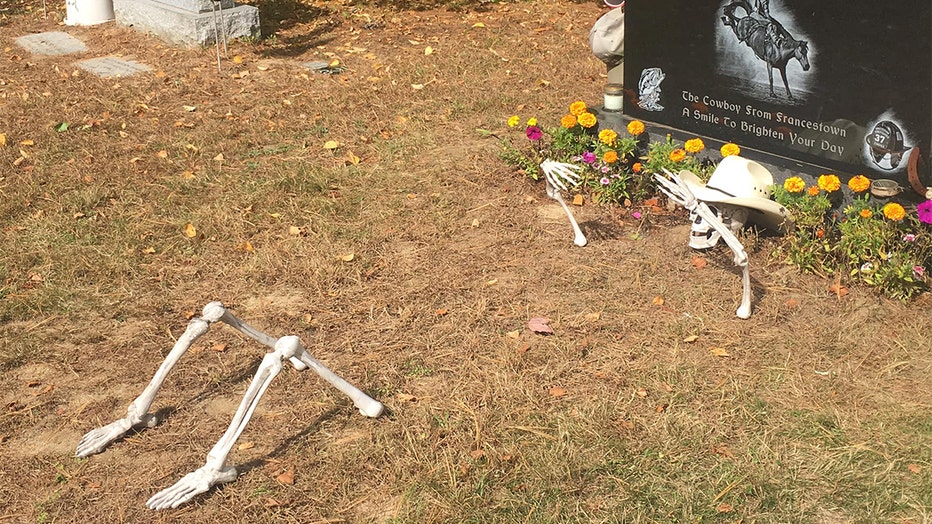 Christina Wohle says decorations she added to her son's grave keep getting removed by cemetery officials.

She and her other son took the decorations to Cole’s cemetery plot where they placed a cowboy hat on the skull in honor of Cole’s cowboy spirit.

They took pictures of the new decor, sending it to family and friends, saying, “Cole popped up to say Happy Halloween to y’all.”

Wohle said the joke was well received and even brought light to a truly difficult situation. But there were some who didn’t find it funny.

She said a community member witnessed the chairperson of the cemetery commission allegedly removing the plastic bones.

Wohle consulted other members of her community who have children burred in the same cemetery who said they didn’t find the decorations to be offensive.

She said she lives in a small town where everyone knows each other. Yet she said members of the cemetery commission never contacted her before or after removing the decorations.

The only information Wohle has gotten as to why the decorations were removed was from what she’s read in the news.

“Their reasoning and motivation for removing the bones have changed from interview to interview and depending on which one of the commissioners was asked,” said Wohle.

The cemetery commission did not immediately respond to a request for comment on Wohle’s claims.

When Wohle posted on Facebook about the bones being removed, she said she began receiving dozens of messages from other parents who feel her pain and appreciate what she’s standing up for.

“Losing a child is the worst pain imaginable, it is not natural to have your child leave this earth before you. It is a pain different and deeper than loosing a spouse, parent brother or sister,” said Wohle. “I think the best thing that can be taken from our story is that communication and kindness goes a long way.”