A pet store employee says a crazed man hit her in the chest with a hammer last month. More than a month later, her alleged attacker is in jail.

DALLAS - A pet store employee says a crazed man hit her in the chest with a hammer last month. More than a month later, her alleged attacker is in jail.

The woman is giving details of the attack in hopes the man responsible will be charged.

Ramirez said she was hit in the chest with a hammer by a man who threatened to rob the Pet Supermarket on Lemmon Avenue in the Oak Lawn neighborhood of Dallas last month.

"It all happened so quick, and then he just bolted off after that," Ramirez added.

Ramirez initially felt her manager was in danger.

"Whenever I saw him turn this way, I saw him holding a hammer right here, and he was trying to get her to turn around, and that's when I intervened, and I was just like, ‘You need to go,’" she said. 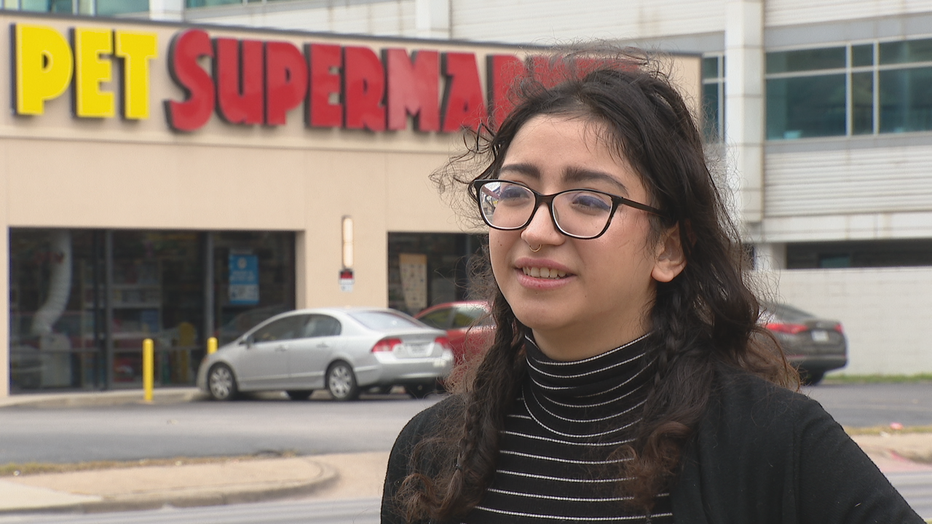 Then the tense situation escalated.

"I whispered ‘Finally,’ because it was too much and he needs to go. He heard me, whipped around, and said ‘What'd you say about me with my attitude.’ I said, ‘You heard me, I didn't stutter,’" Ramirez recalled.

That's when Ramirez said he struck.

“He ended up reeling back and hit me in the heart with a hammer,” she said. “He hit me so hard that I went into a seizure and fell back and hit my head."

He was arrested Tuesday for a different incident that happened the same night Ramirez was attacked.

"He's known around here. We know him for being aggressive. He had just never physically done anything until this point,” said Breanna Deliseo, who works at Wall Street Cleaners, near Oak Lawn and Blackburn.

She said Williams smashed her glass door, then started chasing her.

“I eventually got to the 24-hour emergency center across the street and that's when he realized he couldn't get to me anymore. So he turned around and went to the Pet Supermarket," Deliseo recalled.

Deliseo said Williams returned to the store Monday night, more than a month later. He was briefly detained and released Monday. By Tuesday, he was in the Dallas County jail, charged with criminal mischief.

"It all happened so quick and then he just bolted off after that," Deliseo added.

Right now, he's not charged for attacking Ramirez, but she's confident that will happen soon.

"You're going to get what's coming to you boy, you really are. And they're going to find you, and I can't wait to see the look on your face," Ramirez said.