A dangerous blizzard intensified into a bomb cyclone Friday as it walloped the Great Lakes and Northeast with snow, damaging winds and plummeting temperatures, creating to a travel nightmare for millions trying to reach their destination for the Christmas holiday weekend.

The storm's central pressure dropped by 30 millibars in the 24 hours ending Friday morning, officially surpassing the criteria for bombogenesis, which is a 24-millibar drop in 24 hours.

The combination of dangerous driving conditions and frigid temperatures has been blamed for at least nine deaths across five states.

Three people were killed in weather-related crashes in Oklahoma, along with another three people on the slick roads in Kentucky and one person whose vehicle overturned in Missouri. One person also died in Texas after prolonged exposure to subfreezing temperatures.

Earlier this week, deputies in the Portland, Oregon, area reported roadways were icy when a semi-truck crashed into the scene of a previous wreck on Tuesday along Interstate 84, where one man was killed.

More than 1.4 million power outages have been reported from Texas to the East Coast due to the widespread high winds knocking down trees and limbs, causing damage to power lines and other electrical equipment. A separate ice storm has caused outages in the Pacific Northwest.

The winter storm will usher in bitterly cold, life-threatening temperatures that will spawn a widespread flash freeze in the East and South as rain is followed by temperatures rapidly falling below freezing all the way to Florida, which could see its coldest Christmas in more than 30 years.

On top of the dangerous wind chills, accumulating snow is expected across a large swath of the U.S.

Blizzard Warnings are in effect for more than 10 million people in the northern Plains, Upper Midwest and Great Lakes, including Fargo in North Dakota, Sioux Falls in South Dakota, Rochester in Minnesota, Cedar Rapids in Iowa, La Crosse in Wisconsin, South Bend in Indiana, Grand Rapids in Michigan and Buffalo in New York.

Winter Storm Warnings and Winter Weather Advisories have also been issued by the National Weather Service from the northern Plains eastward to the Midwest, Great Lakes, mid-South, central Appalachians and interior Northeast. These include the cities of Chicago, Cleveland, Detroit, Indianapolis, Milwaukee, Minneapolis-St. Paul and Nashville in Tennessee. 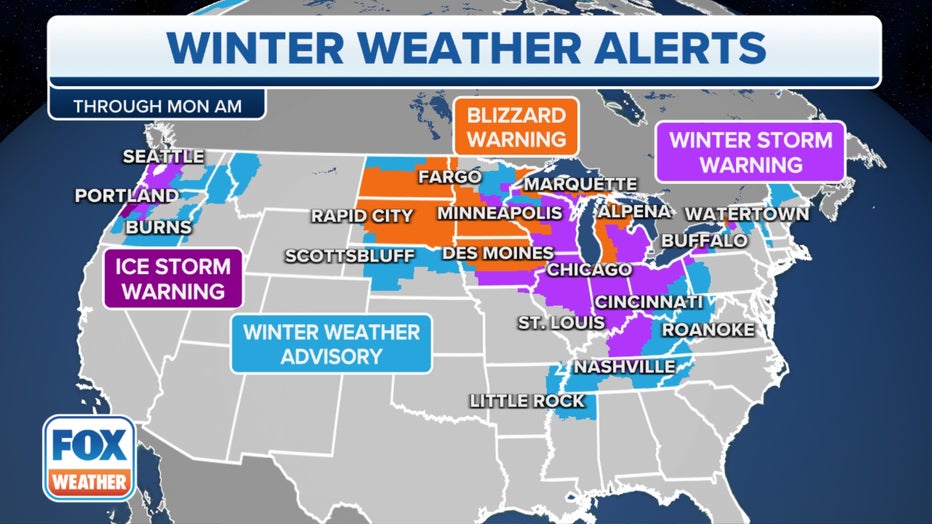 Various winter weather alerts are posted along the path of the winter storm. (FOX Weather)

Travel conditions will be extremely difficult, if not impossible, in many of the areas covered by winter weather alerts due to the combination of snow, high winds and frigid wind chills.

Data from FlightAware showed more than 5,000 flights had been canceled across the U.S. through Saturday, and nearly 16,000 flights were delayed between Wednesday and Friday.

According to the FOX Forecast Center, the highest additional snowfall totals along the path of this winter storm will likely be found near the Great Lakes. More than a foot of snow could pile up in the Upper Peninsula of Michigan, western Lower Michigan, far northern Indiana and western and northern New York due to bands of heavy lake-effect snow through the weekend.

Snow accumulations elsewhere will likely be under 6 inches, except for some locally higher totals from the Adirondacks of New York to the Green Mountains of Vermont, White Mountains of New Hampshire and parts of northern Maine. 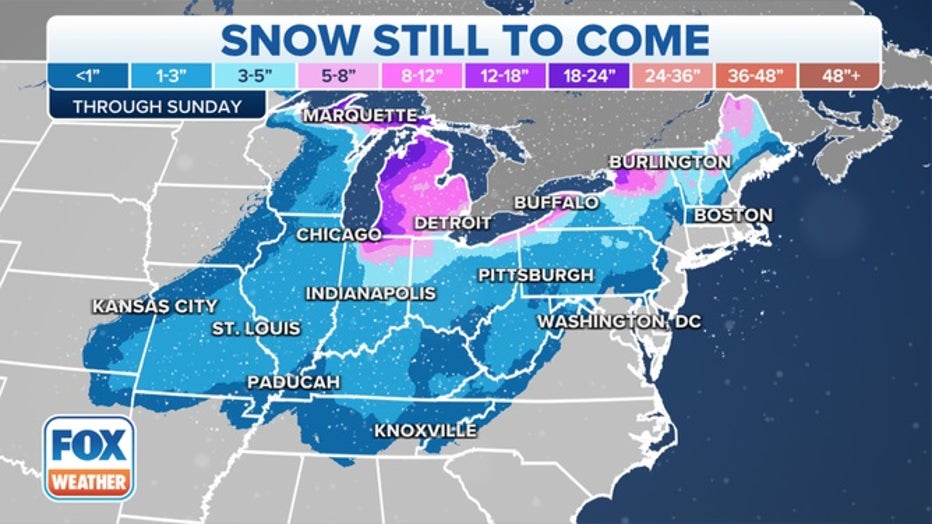 WHITE CHRISTMAS FORECAST: BLIZZARD TO LEAVE MUCH OF NATION COVERED IN SNOW FOR THE HOLIDAY WEEKEND

Where is the winter storm now?

Snow from the intense winter storm is falling across the Great Lakes and parts of the interior Northeast. The precipitation is currently falling as a soaking rain across much of the Northeast out ahead of an arctic cold front, but the rain will quickly change to snow from west to east as the front charges through the region.

In the wake of the arctic front, wind gusts between 30 and 40 mph are still producing areas of blowing and drifting snow in the Plains and Midwest, resulting in dangerous travel conditions even where the snow has already ended.

Even higher wind gusts are being reported in the East, where gusts have topped 50 mph Friday morning in parts of Rhode Island and eastern Massachusetts, contributing to the rising power outages.

Behind the arctic cold front, weather observation sites from the Plains to the Appalachians have reported temperature drops of more than 30 degrees in under an hour.

Texas is dealing with extreme cold amid the 'Bomb Cyclone' winter storm that is impacting millions across the country. FOX Weather's Will Nunley joined LiveNOW from FOX's Josh Breslow from Dallas with the latest.

The winter storm has reached its peak intensity on Friday over the Great Lakes. Blizzard conditions will continue to snarl travel from the Plains and Upper Midwest eastward to portions of Michigan and western and northern New York, where heavy snow will overlap with 40- to 80-mph wind gusts as wind chills plunge well below zero.

According to the FOX Forecast Center, the high winds will likely contribute to thousands of additional power outages across the Great Lakes and Northeast, which could turn into a life-threatening situation for those who lose power amid such frigid temperatures.

WHAT ARE THE WORST AIRPORTS TO FLY INTO DURING WINTER? 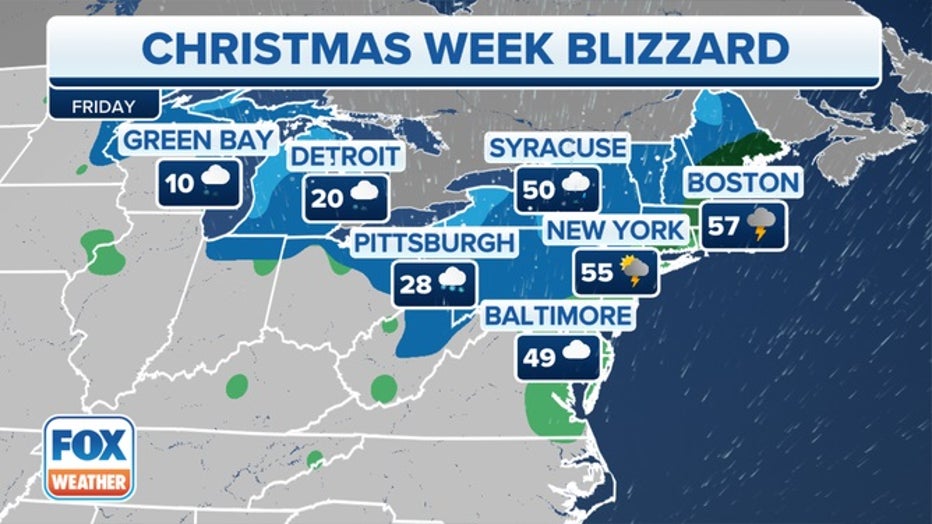 To the east, on the warmer side of the storm, significant impacts are still expected along the East Coast, even in the absence of blizzard conditions.

Wind-driven rain is expected across the mid-Atlantic and Northeast on Friday as damaging winds blast the region with widespread 50-plus-mph gusts. Some gusts between 60 and 70 mph cannot be ruled out as the arctic cold front plows through the East from Friday into Friday night.

Scattered power outages are likely to continue through Friday night, and more widespread outages are possible in areas that see the highest wind gusts, including western and northern New York and northern and coastal New England. 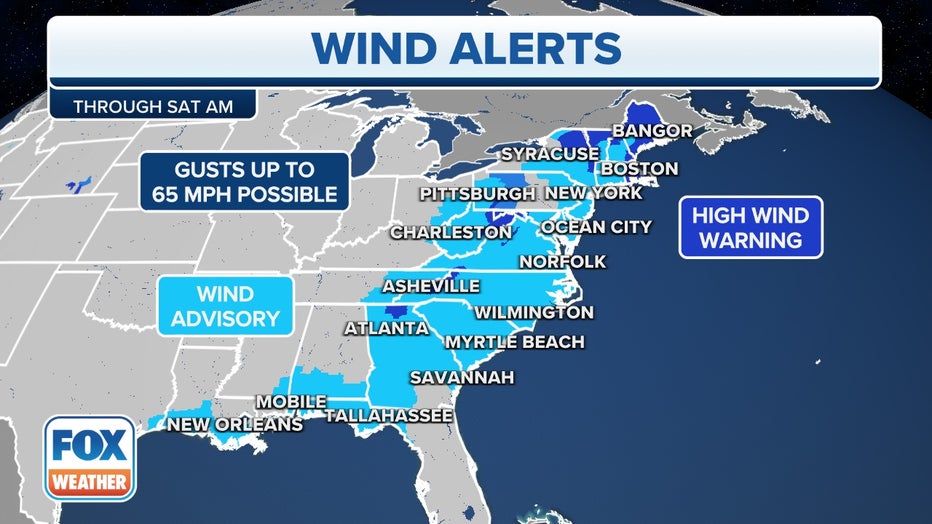 High Wind Warnings and Wind Advisories have been issued across a large swath of the eastern U.S.

The wind gusts will be strong enough to knock down trees and limbs, causing damage to power lines and other electrical equipment, especially in locations where heavy snow adds extra weight to the trees and power lines, making them more vulnerable to being damaged by the high winds.

Make sure you plan ahead for potential power outages during the life-threatening conditions that are expected to accompany the winter storm.

Even after the rain ends, the dangers will not. Rapidly dropping temperatures will lead to a widespread flash freeze of any standing water on the roads, causing dangerous travel conditions from Friday night to at least Saturday.

Additionally, for the immediate East Coast, strong onshore winds will lead to a significant coastal flooding threat along south-facing coastlines, especially during the Friday morning high tide. The FOX Forecast Center said the flood levels could potentially rank among the 10 highest on record along portions of the Northeast and New England coasts.

On Christmas Eve, the winter storm will exit into eastern Canada, but high winds will continue to impact the Upper Midwest and Great Lakes region. As those winds blow over the lakes, intense lake-effect snow bands are expected to develop in the Great Lakes snowbelts and dump heavy snowfall in localized areas through at least Christmas Day. 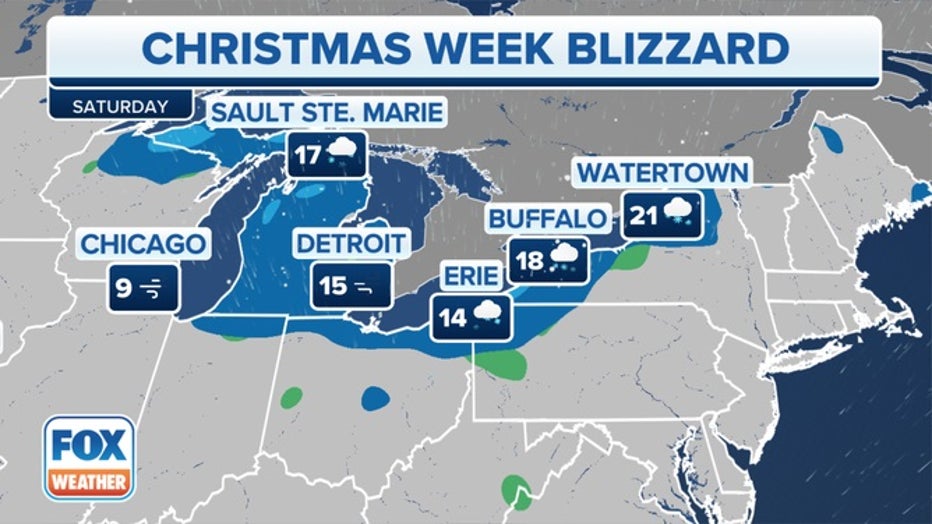 Buffalo, New York, has been placed under a Blizzard Warning due to the combination of heavy lake-effect snow and high winds.

WHAT IS LAKE-EFFECT SNOW?

According to the FOX Forecast Center, snowfall amounts through Monday will range from 1 to 4 feet not only across western New York, but also in the Upper Peninsula of Michigan and western Lower Michigan. 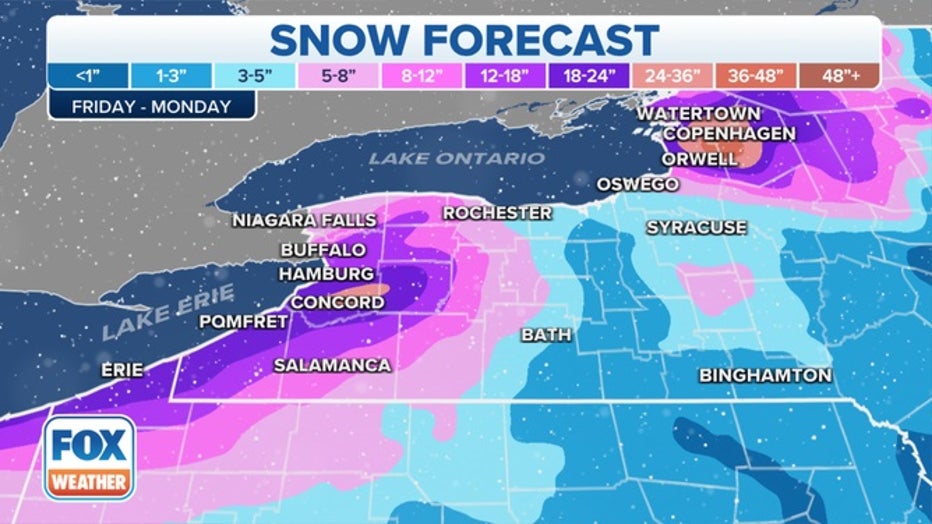 The lingering gusty winds will also continue to produce dangerously cold wind chills throughout Christmas weekend, which could seriously threaten anyone who remains without power.

LINK: Get updates and more on the winter storms at foxweather.com.