What Queen Elizabeth did during her visit to Dallas in 1991

As the world mourns the death of Britain's Queen Elizabeth II, many North Texans are remembering her trip to Dallas more than three decades ago.

DALLAS - As the world mourns the death of Britain's Queen Elizabeth II, many North Texans are remembering her trip to Dallas more than three decades ago.

In May 1991, Queen Elizabeth became the first British monarch to set foot on Texas soil. The Queen and her husband, Prince Philip, spent three days in Texas as a part of a tour of the United States.

She made stops in San Antonio and Austin before coming to Dallas on May 21.

In Austin, she attended a dinner with then-governor Ann Richards.

Former Senator and NATO Ambassador Kay Bailey Hutchison was also there when she was the state's treasurer.

Queen Elizabeth II, the longest-reigning monarch in British history, has died after 70 years on the throne. She was 96.

"She wanted to see Texas. She came and had a wonderful visit. Ann Richards was governor, I was state treasurer," Hutchison recalled. "The gallery around the rotunda filled up and she was just awed by the response. People clapped and were so supportive of her wanting to come to our Capitol."

Queen Elizabeth spoke to the Texas Legislature, with lawmakers gifting her cowboy boots for all of her grandchildren.

"I thank you and the members of both houses for this generous resolution, and also for your very kind gifts for my grandchildren," she said at the time.

Hutchison said that while the queen appeared to most to be stoic, that wasn't who she was when you met her in person.

"Because they sort of tell you that you should never ask her a question, you should make a statement. They really prepare you, but then when you are with her, you are totally comfortable. You can do things that are maybe not correct, and she is so gracious," she said.

Hutchison said the queen was genuinely interested in learning about the culture in Texas.

She met the queen a second time when NATO leaders, including former President Donald Trump, were invited to Buckingham Palace in 2019.

Hutchison said the queen's legacy will be her willingness to adjust and her consistent leadership.

"She also had a way of changing when it was necessary to change. Sometimes leaders don’t do that and she showed that you have to have an instinct when you are a leader of maybe making an accommodation, or doing something you maybe thought you couldn’t do, and she did that on several tough decisions," she said. 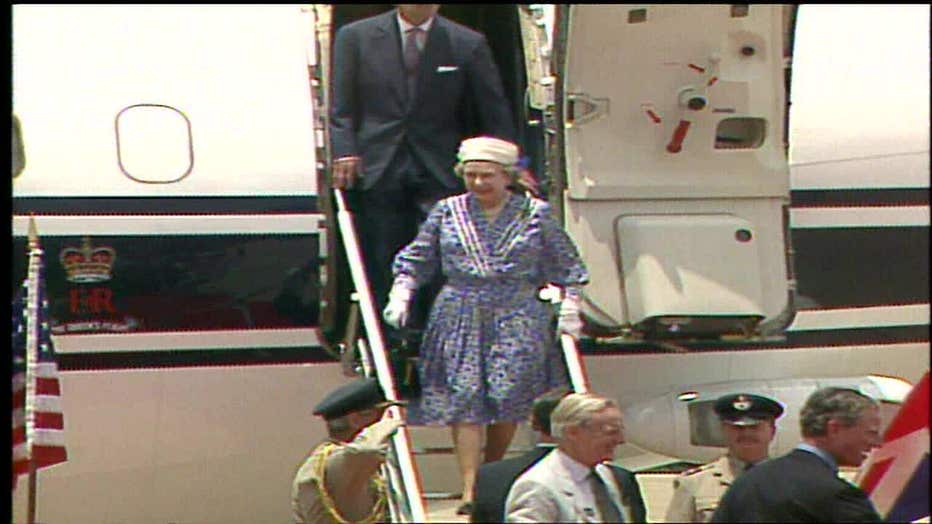 She spent about seven hours in Dallas, accepting gifts from Dallas and Fort Worth, and making stops before spending the night at a hotel.

The royal couple arrived at Love Field Airport where she was introduced to Dallas Mayor Annette Strauss and Mayor Kay Granger of Fort Worth, while a band played "The Yellow Rose of Texas" and the theme from the popular TV show "Dallas".

The queen's first stop in Dallas was the Adolphus Hotel, where she stayed.

Shortly after her visit, Buckingham Palace sent a "Thank You" photo, with a letter and the queen’s signature.

The queen then was taken to the Meyerson Symphony Center where the Dallas Wind Symphony performed ″God Save the Queen″ and ″The Star-Spangled Banner.″ A mariachi band also played, as members of the Ballet Folklorico Hispano de Dallas performed two ethnic dances from the Mexican state of Jalisco.

Later that evening, the Queen and Prince Philip were taken to the Hall of State at Fair Park to honor the 150th anniversary of Dallas.

Queen Elizabeth then traveled to Houston. 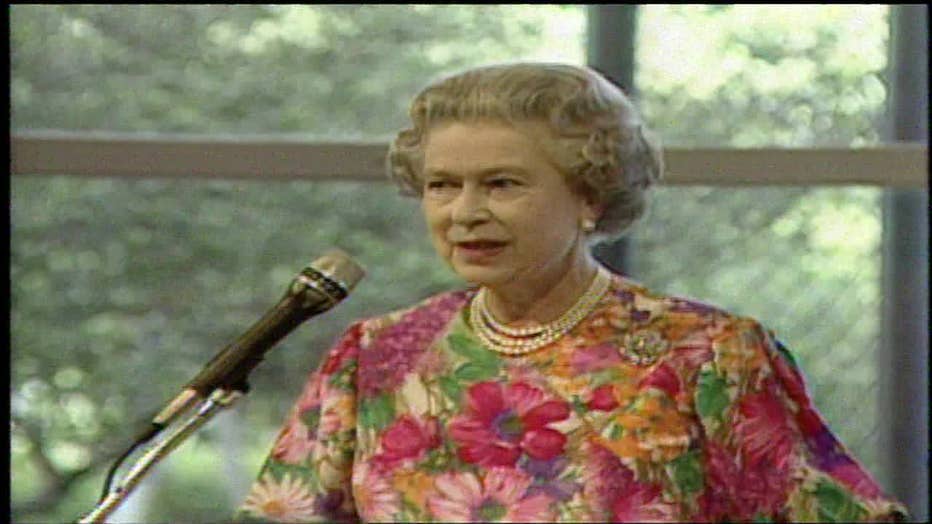 Former President George W. Bush called Queen Elizabeth II "a woman of great intellect, charm, and wit," describing their "time at Buckingham Palace, and having tea with her majesty – and her corgis" some of "the fondest memories of the presidency."

Bush said "Queen Elizabeth ably led England through dark moments with her confidence in her people and her vision for a brighter tomorrow."

Luci Baines Johnson, the daughter of former President Lyndon Baines Johnson released a video statement reminiscing about Queen Elizabeth’s 1991 visit to the library named in honor of her late father.