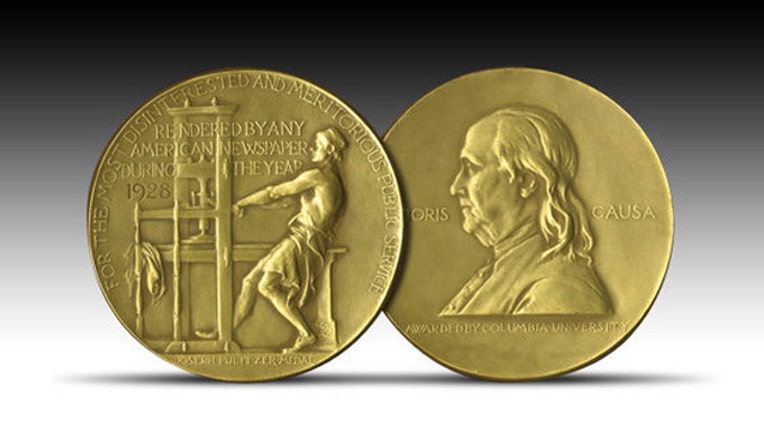 NEW YORK (AP) - The New York Times and The New Yorker won the Pulitzer Prize for public service Monday for breaking the Harvey Weinstein scandal with reporting that galvanized the #MeToo movement and set off a worldwide reckoning over sexual misconduct in the workplace.

The Times and The Washington Post took the national reporting award for their coverage of the investigation into Russian meddling in the 2016 U.S. presidential election and contacts between President Donald Trump's campaign and Russian officials.

The Press Democrat of Santa Rosa, California, received the breaking news reporting award for coverage of the wildfires that swept through California wine country last fall, killing 44 people and destroying thousands of homes.

The Washington Post also won the investigative reporting prize for revealing decades-old allegations of sexual misconduct against Senate candidate Roy Moore of Alabama. The Republican former judge denied the accusations, but they figured heavily in the special election that Democrat Doug Jones went on to win.

One of the biggest surprises of the day came in the non-journalism categories when rap star Kendrick was awarded the Pulitzer for music, becoming the first non-classical or non-jazz artist to win the prize.

The Pulitzers, American journalism's most prestigious awards, reflected a year of unrelenting news and unprecedented challenges for U.S. media, as Trump repeatedly branded reporting "fake news" and called journalists "the enemy of the people."

In announcing the journalism prizes, Pulitzer administrator Dana Canedy said the winners "uphold the highest purpose of a free and independent press, even in the most trying of times."

"Their work is real news of the highest order, executed nobly, as journalism was always intended, without fear or favor," she said.

A string of stories in The Times and The Washington Post shined a light on Russian interference in the presidential election and its connections to the Trump campaign and transition - ties now under investigation by special counsel Robert Mueller. The president has branded the investigation a "witch hunt."

In stories that appeared within days of each other in October, The Times and The New Yorker reported that movie mogul Weinstein faced allegations of sexual harassment and assault from a multitude of women in Hollywood going back decades and had secretly paid settlements to keep the claims from becoming public.

The Pulitzer judges said The Times' Jodi Kantor and Megan Twohey and The New Yorker's Ronan Farrow produced "explosive, impactful journalism that exposed powerful and wealthy sexual predators, including allegations against one of Hollywood's most influential producers, bringing them to account for long-suppressed allegations of coercion, brutality and victim silencing, thus spurring a worldwide reckoning about sexual abuse of women."

The stories led to Weinstein's ouster from the studio he co-founded, and he now faces criminal investigations in New York and Los Angeles. He has apologized for "the way I've behaved with colleagues in the past" but denied any non-consensual sexual contact.

Men and women, famous or not, have spoken about their own experiences of sexual harassment and assault in what has become known as the #MeToo movement.

In other categories, the Arizona Republic and USA Today Network won the explanatory reporting prize for a multi-format look at the challenges and consequences of building the Mexican border wall that was a centerpiece of Trump's campaign.

The local reporting award went to The Cincinnati Enquirer for what judges called "a riveting and insightful" narrative and video about the heroin epidemic in the area.

Clare Baldwin, Andrew R.C. Marshall and Manuel Mogato of Reuters won the international reporting award for their coverage of Philippines President Rodrigo Duterte's deadly crackdown on drugs, and the news agency's photographers received the feature photography prize for their images of the plight of Rohingya refugees who have fled Myanmar.

The breaking news photography award went to Ryan Kelly of The Daily Progress of Charlottesville, Virginia, who captured the moment that a car plowed into counter-protesters demonstrating against a white nationalist rally in the Virginia college town. The car killed one of the counter-demonstrators.

The commentary award went to John Archibald of Alabama Media Group in Birmingham, Alabama, for pieces on politics, women's rights and other topics. Art critic Jerry Saltz of New York magazine won the criticism award for what the judges called his "canny and often daring perspective."

Andie Dominick of The Des Moines Register received the editorial writing prize for pieces about the consequences of privatizing Iowa's administration of Medicaid.

Freelance writer Jake Halpern and freelance cartoonist Michael Sloan were awarded the editorial cartooning prize for a graphic narrative in The New York Times about a family of refugees fearing deportation.

The Pulitzers were announced at Columbia University, which administers the prizes. This is the 102nd year of the contest, established by newspaper publisher Joseph Pulitzer.

Winners of the public service award receive a gold medal; the other awards carry a prize of $15,000 each.