With the winter storm gone, many North Texans face the aftermath still without water.

DALLAS - With the winter storm gone, many North Texans face the aftermath still without water.

Bottled water distribution sites are set up across our area.

The need is critical with many people still under boil water advisories. Others have no water at all because of water main breaks and repairs.

From Fort Worth to Dallas, the story is the same across North Texas: people need water.

Fretz Park is one of four water distribution centers that the city of Dallas has set up.

Graham Gibson among those getting water at Fretz Park Monday. It was day two of three days of emergency water distribution locations.

"I've been using the pool water to flush my toilet," Gibson said. "And we got the electricity back Wednesday night so it hasn't been fun."

Maxine Stokes lost her water when a pipe broke in her condominium complex and the landlord turned all the water off.

"I talked to my landlord and she said they're going by the buildings to repair," she said. "And they've run out of supplies so they're having a hard time doing it. I’ve been without water since then."

SKY 4 shows long water wait lines in Fort Worth even before the giveaway got underway. That city flooded with water main breaks. 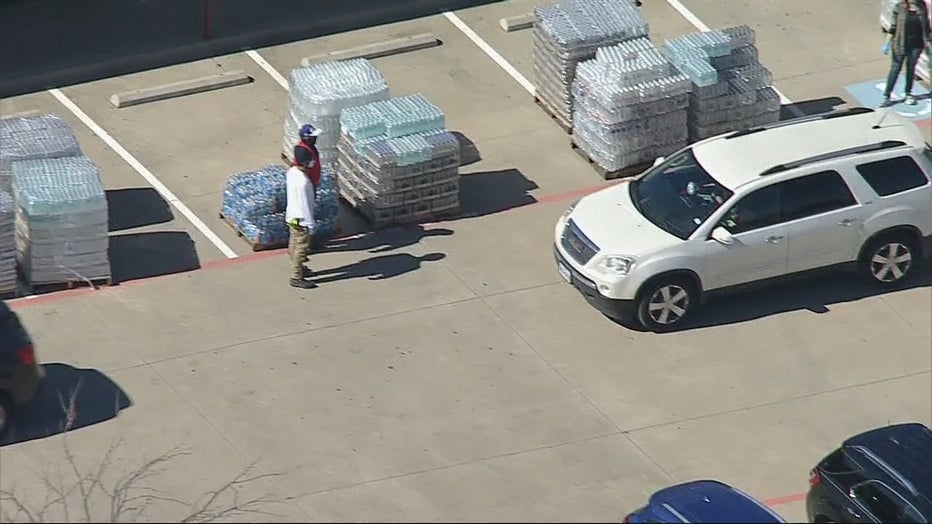 Charles McClatchey drove to Fort Worth from Alvarado to get all the water he could, including filling five-gallon jugs. He says no water means most Alvarado restaurants are closed.

"They have to close because it’s not sanitary. Workers need water to wash their hands and use the restroom," he said.

People grateful for water for themselves and their pets.

The distribution of water at the centers in Dallas will continue through Tuesday at 10 a.m.