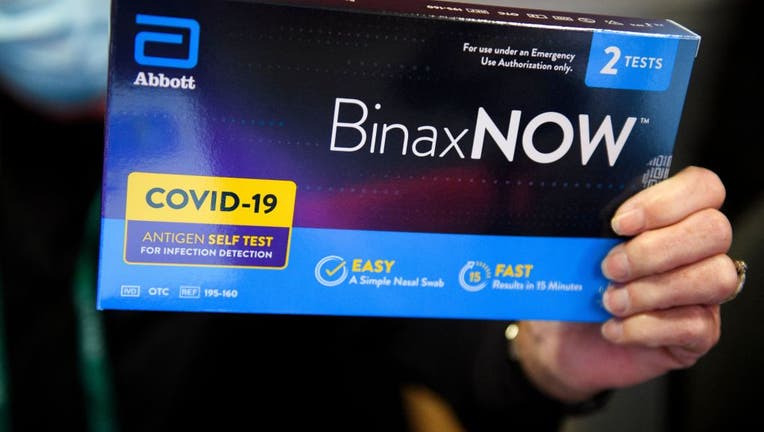 An Abbott BinaxNOW Covid-19 antigen self test is displayed for a photograph before being distributed to conference attendees ahead of the Consumer Electronics Show (CES) at Harry Reid International Airport (LAS) on January 2, 2022 in Las Vegas, Nevad

WASHINGTON - Retail behemoths Walmart and Kroger have both raised the price for BinaxNOW rapid COVID-19 tests, following the expiration of an agreement with the Biden administration to sell the antigen self-test kits at cost.

In September, the two companies along with Amazon made a deal with the White House to sell the coronavirus tests made by Abbott Laboratories for $14 for 100 days, ending last month.

"The program ended in mid-December, and while other retailers increased prices in mid-December, Walmart held the $14.00 through the holidays before increasing the price," a Walmart spokesperson told FOX Business in a statement. The cost of the tests are now at $19.98.

The company said that the tests are being sold in Walmart stores and online, but noted there are purchase limits in place due to "significant demand" for at-home coronavirus tests.  The BinaxNOW tests are currently out of stock on Walmart.com.

How Biden plans to distribute free COVID-19 at home tests

A Kroger spokesperson confirmed to FOX Business that since fulfilling its commitment to the Biden administration "that pricing program has now phased out and retail pricing has been reinstated." Kroger is selling the two-test kits for $23.99.

Amazon.com does not currently have the BinaxNOW tests available for sale, and the company did not immediately respond to FOX Business' request for comment.

A surge in demand for COVID-19 tests has been driven by holiday gatherings and the highly contagious omicron variant, making the kits both difficult to find and to keep in stock. The average number of tests administered per day is nearing record highs.

The Biden administration vowed last month to make 500 million at-home tests available for Americans to order through a new website sometime in January, but the details regarding timing and costs have not yet been revealed.