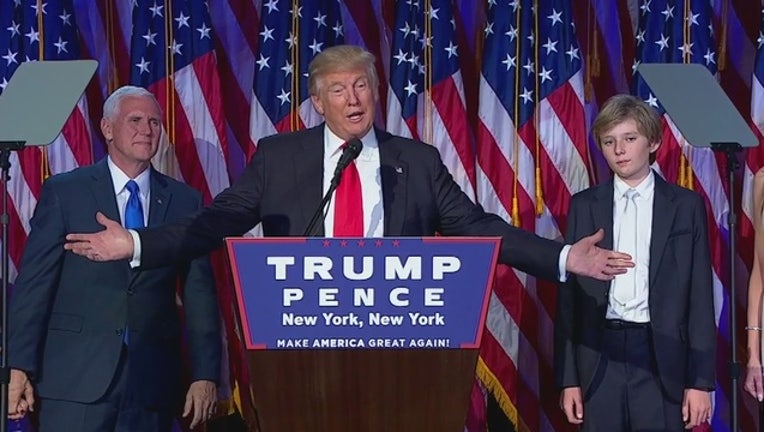 It was the most stunning political victory of the 21st century, one that brought shocked concern in many parts of the world and cheers in others. One uncontroversial certainty was that it would cause reverberations around the globe.

Donald Trump campaigned on an "America First" platform, but has found himself as president drawn into thorny geopolitical complexities aplenty in the first 100 days of his administration. Relations with Russia plummeted to "an all-time low," as Trump himself described it, in the wake of the U.S. missile strikes on the Syrian government's airfield in response to a deadly chemical attack. The administration's Syria policy and how to handle President Bashar Assad seesawed.

A window of opportunity appeared with China after Trump hosted President Xi Jinping for a summit at his Florida estate, but tensions on the Korean Peninsula soared over North Korea's nuclear program. Mexico showed consternation and agitation over the president's planned border wall, but gave no sign it would pay for the structure as Trump had repeatedly promised voters.

Trump's travel ban rocked refugees and asylum-seekers in several Muslim-majority nations, though it was blocked by federal courts at home. There were echoes of darker U.S.-Iran days, but nothing yet that would derail the landmark nuclear deal, as the decades-long Israeli-Palestinian conflict continued to simmer.

DO YOU FEEL MORE SECURE UNDER A TRUMP PRESIDENCY, OR IN DANGER?

SHAHRZAD EBRAHIMI, Tehran, Iran: "(The world) is 100 percent a more dangerous place. The U.S. threats to the world had been lessened during (Barack) Obama's presidency and policies of that country were based on moving toward peace for at least eight years. But as soon as Trump took office, demonstrations began against him and the situations in Syria, Palestine, bombings, military and war threats all got worse. The more he sticks with his current policies, the more insecure and non-peaceful the world, especially the Middle East, will become. As you can see, now he is exchanging verbal blows with North Korea. Sometimes one can assume that this situation can even trigger a third world war."

KIM HYANG BYOL, Pyongyang, North Korea: "It's coming to 100 days since Trump became president, but we don't care who the president is. The problem is whether they're going to stop their hostile policy against North Korea, and whether they will do anything to help us reunify our country."

RUSTAM MAGAMEDOV, Moscow: "(Trump is) agent provocateur, but in reality, he is just a good showman, as they say in the U.S. The fact that he became a president is rather scary, because he can start a war. It seems like that he is already moving toward the Korean borders. I think it is dangerous, first of all for Russia, because as a president and politician he is a bad person, a bad politician who has little understanding of politics.

DAN MIRKIN, Tel Aviv, Israel: "Yeah, well maybe a little bit more dangerous. But I think that the steps that he took should have been taken a long time ago. And if it became more dangerous then it's not only because of Trump. Although, he has other drawbacks."

IS THE TRUMP ADMINISTRATION MORE BARK THAN BITE?

DIANE LALLOUZ, Tel Aviv: "It's true that Donald Trump has a loud bark and you can say it's more bark than bite. But, not really. It's enough that he takes a few actions as opposed to not doing anything. He talks a lot, sometimes way too much and right off the sleeve without actually thinking about it and that may be a problem. But, at least the world knows that Donald Trump is going to take action when required."

RAYA SAUERBRUN, Tel Aviv: "If it's barking or if it's doing, at least it shows that it's doing something. If it will sustain for a long time, we don't know."

MOHAMED SHIRE, Mogadishu, Somalia: "This might be a new step; this might be a new strategy. We probably have to wait and see, but I think the United States administration needs to be very careful in just getting involved in Somalia without having a clear strategy and program that they align with the current Somali government."

YADOLLAH SOBHANI, Tehran: "Trump comes out with a lot of hype at first but eventually backs down from some of his stances on issues such as Russia, Middle East, Syria and so on. His inconsistent actions have proven that his bark is worse than his bite and he should not be taken very seriously."

MAJED MOKHEIBER, Damascus, Syria: "This is why we cannot predict whether there will be stability or more military security. In addition to that, we see that there are military tension spots around the world in other areas such as North Korea ... that frankly may lead to a big explosion and a world war."

JUAN PABLO BOLANOS, Mexico City: "I think it's a bit of both. On the issue of sending Mexicans back, it is being fulfilled by the guy, Trump, and on the issue of building the wall, I definitely think he will not achieve it."

HAS TRUMP CHANGED YOUR VIEWS ABOUT AMERICA?

RA SO YON, Pyongyang, North Korea: "After Trump became president, there has been no improvement in America's image. If America doesn't stop its aggression against us and pressure on us, then we'll never have any good image of America; it will only get worse. We'll never be surprised, whatever America does. And we're not expecting any surprises from Trump."

YURI (no last name given), Moscow: "Nothing actually had changed, for real. Nothing had changed in Russian-American relations. They aren't our friends or enemies. Geopolitical enemies, maybe, that's it."

MARGRET MACHNER, Berlin: "My trust at the moment is a lot less than it was earlier. One had the feeling that America was a strong, safe partner and I do not believe this anymore."

DAN MIRKIN, Tel Aviv: "I think that the U.S. remains the beacon of democracy because the U.S. itself is much more than its president. The president can be less or more of a beacon. But, America is a beacon."

HAMZA ABU MARIA, Hebron, West Bank: "I'm about 30 years old, and since I grew up and started to understand and follow news, I don't think the United States up until today was a beacon of democracy. If it was truly democratic, then from a long time ago they would have done justice to the Palestinian people."

MOHAMMAD ALI, Damascus: "We should never bet on any American administration, either Republican or Democrat. It's the same front, supposedly to fight terrorism, but they didn't do any of that. Instead they carried out an aggression against a sovereign state, which is Syria. They attacked Syria and they attacked the air base of a sovereign state and a member of the Arab League."

DEQO SALAAD, Mogadishu: "The U.S. was once both the beacon of democracy and human rights, but nowadays, a big change has happened as we can see more segregation committed by President Trump, especially when he said he was going to ban Muslims coming to the U.S. And with that, he has damaged the reputation of the U.S. of being the beacon of democracy and human rights in this world that the U.S. government promoted for ages now."

ARE WE NOW LIVING IN A "POST-TRUTH" WORLD?

DIANE LALLOUZ, Tel Aviv: "I don't think that we're existing in a post-truth world and I don't think that the way we consume information has anything to do with Trump. Actually over the last several decades we are getting information more and more on social media, so people are getting small amounts of information. Not too much real knowledge and that's part of the problem. People are making judgments based on tiny amounts of truth or half-truth or non-truths, and it's impossible to know, by the social media, what is really true. Is Trump the cause of this? I don't think so. I think Trump is just a part of the picture that we live in today."

DAN MIRKIN, Tel Aviv: "I don't think it affects the way that I consume information but it certainly changes the way in which the information is delivered, and the fact of alternative truth, alternative facts is a new invention, so we have to apply filters more than before."

MAHMOUD DRAGHMEH, Nablus, West Bank: "The world is far from the truth, despite the fact the technological development helped the news to reach. But I think that there is a distance from the truth, because the media, with all my respect to the different media outlets, everyone adopts his idea and exports it to the world."

WHAT HAS SURPRISED YOU ABOUT PRESIDENT TRUMP?

UTE HUBNER, Berlin: "I find he is very honest - more honest than I thought in the sense that a lot isn't pushed under the table. He says it like it is, while here in our case so much is said and talked about that "everything is fine, wonderful and all is good," while we know that the reality is more often than not something else."

FATMEH (full name not given) Damascus: "Trump increased problems in the Arab world and the first proof is the strike on Syria. This has increased problems and confusion. He didn't do anything against terrorism; he only increased it. There is nothing new. His policy has been to oppress people, especially the Arab people. We didn't see anything new."

YADOLLAH SOBHANI, Tehran: "What shocked me most from Trump was a sudden shift in his policies toward Russia from a friendly position to a clash. I did not expect such instability in a politician's behavior."

PAYAM MOSLEH, Tehran: "What scared me most was the classification of human beings (under Trump's proposed Muslim ban). I think history has taught and shown us enough times that separating people from each other has never done anyone any good. Building walls either in Berlin or America has no results and is disastrous."

MAHDIEH GHARIB, Tehran: "What surprised me most was preventing Iranians from entering the United States or even barring those Iranians who were U.S. residents and had temporarily left that country. Bombing Syria was the second thing that surprised me."

SHIMON ABITBOL, Tel Aviv: "He's playing too much golf. That's the only thing I'm surprised by. I mean, how can he have so much time to play so much golf?"

Find a full transcript of AP's interview with President Donald Trump on his first 100 days in office here .