The first STAAR test scores since the pandemic began have been released and confirm what many feared: virtual learning did have a negative impact on students' education.

FORT WORTH, Texas - The first STAAR test scores since the pandemic began have been released and confirm what many feared: virtual learning did have a negative impact on students' education.

School districts are now preparing for an intense school year to catch kids up.

"It really underscored the belief that the best place for students is in our schools in person," said Fort Worth ISD Superintendent Dr. Kent Scribner.

This year's STARR results released on Monday serve as a grim lesson in pandemic responses for educators and district leaders like Fort Worth ISD.

"There is no substitute for high-quality in-person instruction," Scribner said.

Across the state, the failure rate for the reading portion of the STAAR test increased by 4% compared with 2019, and it was 16% higher on the math portion.

Nearly 4 out of 10 students are not even close to being ready for the next grade. The biggest impact was felt by virtual learners. 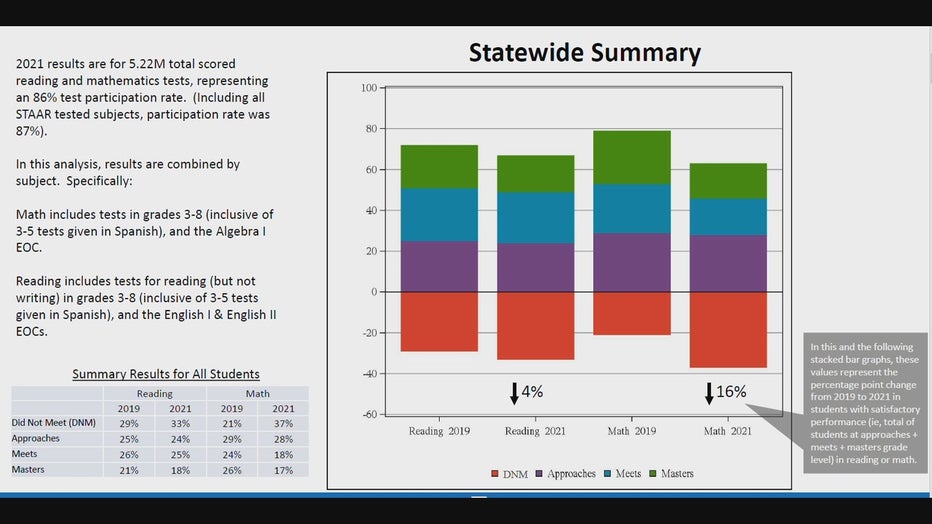 So to catch students up, Fort Worth ISD and other districts are adding instructional opportunities.

"We’re extending the school day for 30 most-affected campuses for tutoring and enrichment.

The district's summer school enrollment is triple its usual number at 15,000 students. There will be 14 Saturday school days and nearly three weeks of school for students in most need.

"Everything will be in person," Scribner said. "We want to make sure the best teachers are working with the students in greatest need."

The state legislature passed a bill that is allowing many of the new tools for districts.

"It felt like legislature was wise in allowing retired teachers to draw retirement and come back and lend an aid," said Sunnyvale ISD Superintendent Dr. Doug Williams.

He pointed out that there is still one big unknown. Those just learning to read in kindergarten through second grade don't receive the STAAR test.

Educators across Texas were waiting for the STAAR test results with a sense of dread. They knew the results would be bad and they are. Dallas ISD Deputy Superintendent Susan Cordova joined Good Day to talk about the results of a year of largely at-home learning.

"It is the building block foundation," Williams said. "If they cannot read, they cannot be successful academically. Those formative years are kinder through third."

Williams expects the impact of the pandemic to be felt for years to come.

"I would anticipate this is a 3 to 5-year process," he said.

Things could be worse than the data shows.

11% fewer students took the STAAR test compared with 2019. Since the vast majority of those students were remote learners, it is likely their scores were lower than their in-person peers.