A Northeast Dallas baker has been delighting the neighborhood with its tasty confections, although battered and boarded up after what appears to be a freak accident.

DALLAS - A Northeast Dallas bakery is back open after a car crashed through the front of the shop.

Security cameras captured some incredibly scary video last week as an SUV barreled through the kitchen with busy workers inside.

Haute Sweets Patisserie is open for business once again.

The Northeast Dallas business has been delighting the neighborhood with its tasty confections, although battered and boarded up after what appears to be a freak accident.

Jason Reed manages his wife’s bakery. She’s the chef. They were both working last Tuesday afternoon when an SUV smashed through the bakery. 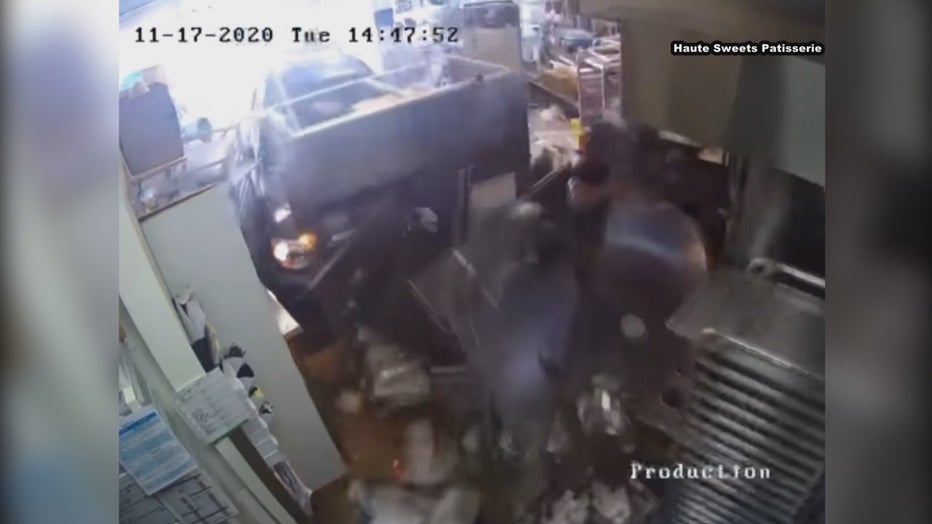 “I had my back to the window and it sounded like a bomb went off. It was just this loud explosion,” Reed recalled. “As I turn, everything pushes me off to the side.”

The SUV crumpled everything in its path, seriously injuring Reed’s wife and severely injuring a baker who suffered a spinal injury.

Reed said his first thought was where was his wife. Then he immediately helped the baker who was writhing in pain.

How did it happen?

“Lady was just rolling into the parking spot. Perfectly straight. No issues. The vehicle just kept rolling. Once it rolled over the curb onto the sidewalk, we just assumed that she panicked and hit the accelerator,” Reed said. “And the vehicle just launched completely into the kitchen.”

Reed says times had already been tough weathering the pandemic. The crash is dealing another major blow, but they’ll do their best to survive.

“My wife and I are just digging in our pockets to keep this thing afloat,” he said. “We are going to keep this shop open as long as we can. I have employees I need to take care of. I have a community to feed.”