A widespread internet outage was reported Tuesday, impacting many customers across the northeast U.S.

In an emailed statement 90 minutes after the outage was first reported, Verizon said it was working on the problem hurting Fios service "throughout the Northeast corridor" and that some service had already been restored.

Down Detector, a website that offers real-time status updates on outages, showed thousands of reports of issues with Verizon Fios service earlier Tuesday — impacting both landline internet and mobile internet.

The telecom giant had reported a cut fiber in Brooklyn via Twitter, although it’s not clear if that issue was responsible for the entire outage. Verizon didn't give any estimate in its email about when the problem would be fixed and didn't reply to questions about what caused the problem.

Comcast, another major internet service provider, said its network was performing normally in the early afternoon on the East Coast.

People posting on Twitter reported having issues connecting with various online services in a large geographic area spanning across the northeast. Cities with the most reported issues included New York City, Philadelphia, Baltimore, Washington, D.C., Boston and Pittsburgh, according to Down Detector.

The outage affected internet and cloud providers as well as major sites such as Google and Facebook. Amazon, whose web services division powers a wide range of online services, indicated its network wasn't the cause of the problem. 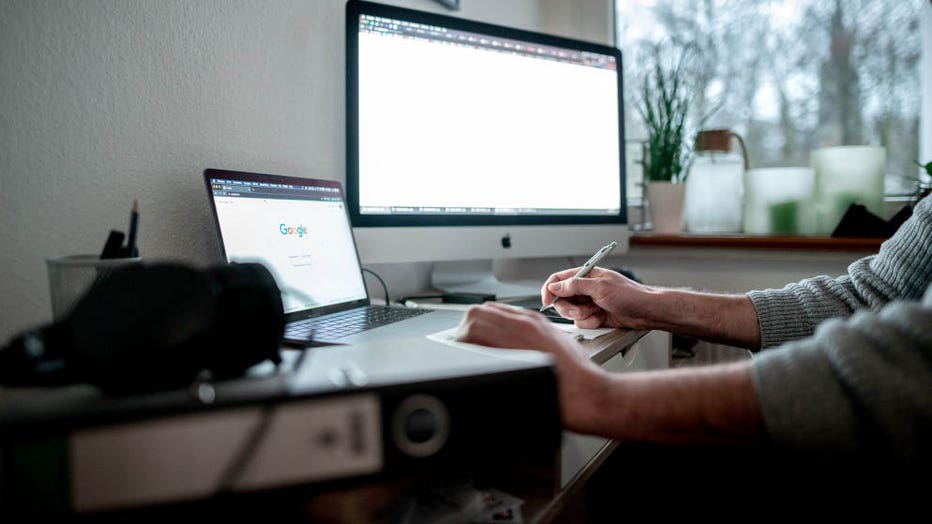 A file image show a man sitting with a laptop and a screen at a table in front of a home office window. (Photo by Fabian Strauch/picture alliance via Getty Images)

"We are investigating connectivity issues with an internet provider, mainly affecting the East Coast of the United States, outside of the (Amazon Web Services) Network," the company wrote in a Tuesday morning post. "We are investigating the issue with the external provider."

Google said it also had not found issues with its own services and was investigating.

The East Coast outages began at 11:25 a.m. local time and recovery began at 12:37 p.m, according to Doug Madory, director of internet analysis at Kentic, a network monitoring company. He reported a 12% drop in traffic volume to Verizon.

Issues with internet service have become more pressing over the past year, as the coronavirus pandemic has forced millions of people to work from home and students to attend school remotely.

Working remotely can save thousands per year, career site finds

The average worker can save almost $5,000 a year just by not driving into the office anymore.

The outage also appeared to impact some school districts, including Prince William County Public Schools in Virginia, which said on Twitter it was "aware of internet connection problems with Verizon FIOS impacting students and staff."

Fairfax County Public Schools echoed the issue, writing on Twitter, "FCPS knows some students are not able to login to online classes.