Well before the sun came up Thursday, Jazmin Cazares sat on her sister’s bed and wept for the 9-year-old killed in the Uvalde school rampage one month ago. Then the teenager with purple-streaked hair got up for the four-hour drive to the Texas Capitol, where she tearfully pleaded with lawmakers to pass tougher gun laws and questioned why so many security measures failed.

AUSTIN, Texas - Well before the sun came up Thursday, Jazmin Cazares sat on her sister’s bed and wept for the 9-year-old killed in the Uvalde school rampage one month ago.

Then the teenager with purple-streaked hair got up for the four-hour drive to the Texas Capitol, where she tearfully pleaded with lawmakers to pass tougher gun laws and questioned why so many security measures failed.

"I shouldn’t have to be here right now. I should be at home watching a movie with my sister," she said through sniffles. "I’m here begging for you guys to do something or to change something, because the people that were supposed to keep her safe at school didn’t, they failed."

Her sister Jacklyn — a tough-minded and compassionate girl who dreamed of visiting Paris and becoming a veterinarian — was one of 19 children shot to death inside Robb Elementary School on May 24 before police stormed the classroom and killed the gunman. Two teachers also died. 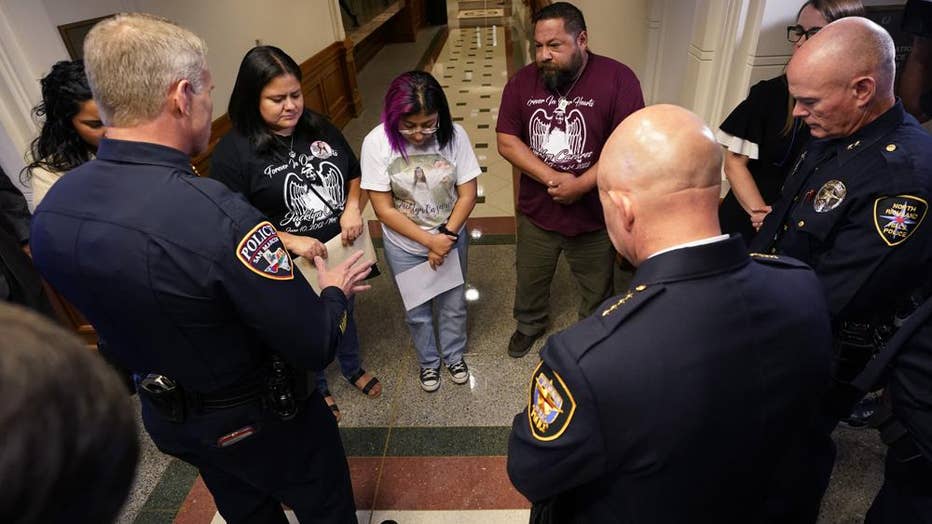 Jazmin Cazares, center, whose young sister Jacklyn was was one of 19 children killed by a gunman at Robb Elementary School, with her parents, Javier, right, and mother, Gloria, rear, pray with a group of police chiefs after a hearing at the state cap

The massacre and a string of recent mass killings in the U.S. have renewed the debate over gun laws, school safety and how to stop the violence. In Texas, lawmakers have responded to several mass shootings in recent years by making it easier to carry guns, rather than to clamp down.

Jazmin’s testimony before a committee of lawmakers looking at how to prevent mass shootings came as Congress moved toward passing its most far-reaching gun violence bill in decades and the U.S. Supreme Court issued a ruling saying Americans have the right to carry firearms in public.

But all that mattered to the 17-year-old about to enter her final year of high school was that something be done to make schools safer. She said she’s been doing active shooter drills since she was in pre-kindergarten.

"It’s terrifying, not knowing if it’s true or not every single time we go into lockdown. And then having to go back to school next year?" she said. "Going to school shouldn’t have to be a decision. But it is. I have my senior year, that’s it. Am I going to survive it?"

Cazares told lawmakers they could honor the victims by adopting gun background checks and "red flag laws" that allow removing guns from people at extreme risk of harming themselves or others.

The Uvalde gunman was a former student, Salvador Ramos, who days after turning 18 bought the AR-15-style semi-automatic rifle he used in the attack.

"There should be absolutely no reason this murderer could have access to a firearm," Cazares said, who later said she knew committee members were listening when she saw them tear up.

The Republican-controlled legislature in Texas has stripped away gun restrictions over the past decade, even as the state suffered mass shootings that have killed more than 85 people since 2018.

The state doesn’t require a permit to carry a long rifle like the one used in Uvalde, and it allows 18-year-olds to buy them. Last year, lawmakers made it legal for anyone 21 and older to carry a handgun in public without a license, background check or training.

Jazmin Cazares told lawmakers that since the shooting she has reviewed the school’s security rules, ticking off a list of requirements that failed to stop the shooter, including that teachers are told to keep their doors locked at all times.

"How, when some of those classroom doors didn’t lock?" she said, with family members sitting behind her wearing T-shirts featuring pictures of Jacklyn and the words "Forever in our hearts."

Her family’s grief, she said, is compounded by the knowledge that some of what happened at Robb Elementary could have been prevented.

Her little sister, she said, loved singing and dancing and "was one of the sweetest souls anyone would ever meet."

Jacklyn and her cousin, Annabell Rodriguez, were best friends, part of a close-knit quintet of classmates. All five died in the shooting.

Right after Jazmin testified, a woman who lost her parents in a 1991 shooting that left two dozen dead in Killeen, Texas, told the committee that waiting periods for gun sales are "worthless" and gun-free zones should be eliminated.

Hupp, a former Republican lawmaker, said she was invited to address the committee by one of its co-chairs.

After Hupp spoke, Jacklyn’s father, Javier Cazares, followed her into a hallway and they exchanged handshakes and a brief hug.

"There is a bond there, just automatically, unspoken," Hupp said. "In one sense, it was my parents, and they died quickly and they died together. I can’t imagine losing a kid. I can’t even go there in my head."

Days after the Uvalde tragedy, Javier Cazares, told of how he rushed to the school and kept a close watch on children fleeing the school to catch a glimpse of his 9-year-old "firecracker."

He and other parents grew frustrated that police weren’t doing more. "A lot of us were arguing with the police, ‘You all need to go in there,’" said Cazares, an Army veteran.

Cazares said Thursday that he still struggles to trust the constantly evolving timelines from state police. "Nobody wants to get blamed for what their actions were that day," he said.

During a break in the hearing, Cazares and his family met with about 10 police chiefs and officers in a hallway. "We failed you," Stan Standridge, chief of police in San Marcos, Texas, told the family.

The delays and mistakes in the law enforcement response are now central to multiple investigations. The head of the Texas state police this week called it an "abject failure," and said the police reaction ignored everything learned since the Columbine High School shooting in Colorado in 1999.

Police had enough officers and firepower to stop the gunman three minutes after he entered the school, Col. Steve McCraw, director of the Texas Department of Public Safety, said Tuesday. But police officers armed with rifles waited in a school hallway for more than an hour before going into the classroom and killing the gunman.

He put much of the blame for the delays on Pete Arredondo, the Uvalde school district police chief who McCraw said was the commander in charge.

Arredondo has said he didn’t consider himself in charge and assumed someone else had taken control. He has declined repeated requests for comment from The Associated Press.

Uvalde’s mayor pushed back against casting blame on Arredondo, saying the Department of Public Safety has repeatedly released false information and glossed over the role of its own officers.