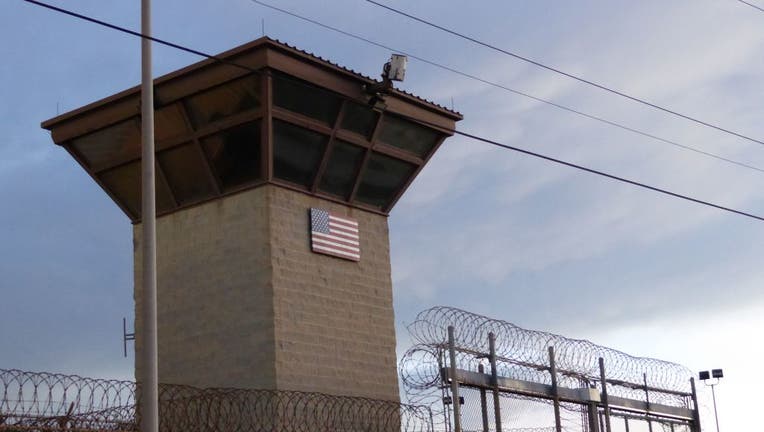 The main gate at the prison in Guantanamo at the US Guantanamo Naval Base on October 16, 2018, in Guantanamo Base, Cuba. - The Guantanamo prison, which houses detainees accused of participating in the 9/11 attacks, is to remain open for at least 25 y

WASHINGTON (AP) - A Saudi prisoner at the Guantanamo Bay detention center who was suspected of trying to join the 9/11 hijackers has been sent back to his home country for treatment for mental illness, the Department of Defense said Monday.

Mohammad Ahmad al-Qahtani was flown back to Saudi Arabia, to a treatment facility, from the U.S. base in Cuba after a review board including military and intelligence officials concluded he could be safely released after 20 years in custody.

The 46-year-old prisoner has suffered from mental illness, including schizophrenia, since childhood, according to medical examinations and records obtained by his lawyers. The U.S. dropped plans to try him after a Bush administration legal official concluded he had been tortured at Guantanamo.

The FBI late Saturday released a newly declassified document related to logistical support given to two of the Saudi hijackers in the run-up to the Sept. 11, 2001, terrorist attacks. The document details contacts the hijackers had with Saudi associates in the U.S. but does not provide proof that senior Saudi government officials were complicit in the plot.

With his release, there are now 38 prisoners left at the detention center. He is the second released under President Joe Biden, who has said he intends to close the facility.

RELATED: Afghans protest US order freeing up $3.5B in assets for 9/11 victims

"The United States appreciates the willingness of Saudi Arabia and other partners to support ongoing U.S. efforts toward a deliberate and thorough process focused on responsibly reducing the detainee population and ultimately closing of the Guantanamo Bay facility," the Department of Defense said in a statement announcing the repatriation of al-Qahtani.

However, only half the men held there have been cleared for release, and no decision has been made about what to do with the rest, including those who still face trial by military commission.

The Defense Department notified Congress of its intention to transfer al-Qahtani in February, prompting outrage from some Republicans.

Lawyers for al-Qahtani obtained a federal court order in 2020 requiring a medical examination of the prisoner by an independent medical panel, which could have ordered his repatriation under Army regulations if the diagnosis of his doctors was confirmed. The Trump administration contested the order, a legal fight that was dropped under Biden.

"After two decades without trial in U.S. custody, Mohammed will now receive the psychiatric care he has long needed in Saudi Arabia, with the support of his family," said Ramzi Kassem, a law professor at the City University of New York who represented al-Qahtani with help from students for over a decade. "Keeping him at Guantanamo, where he was tortured, and then repeatedly attempted suicide, would have been a likely death sentence."

In August 2001, al-Qahtani was turned away from the U.S. at the Orlando airport by immigration officers who were suspicious of his travel. The lead Sept. 11 hijacker, Mohammed Atta, was going to pick him up to take part in the plot, according to previously released documents.

U.S. forces later captured him in Afghanistan and sent him to Guantanamo, where he was subjected to brutal interrogations that the Pentagon legal official in charge of war crimes commissions said amounted to torture.

That treatment included beatings, exposure to extreme temperatures and noise, sleep deprivation and extended solitary confinement. An FBI official in 2002 observed al-Qahtani speaking to non-existent people, hearing voices and crouching in a corner of his cell while covering himself with a sheet for hours at a time.

The 38 remaining prisoners at Guantanamo include 19 who have been approved for repatriation or resettlement by the review board. There are another 7 who are eligible for review. Ten prisoners face trial by military commission, including five charged with involvement in the Sept. 11, 2001, attacks. Their death penalty case has been stalled for years in the pretrial phase.

The remaining two prisoners at the base have been convicted, one of whom, former Maryland resident Majid Khan, is nearing the completion of his sentence under a plea deal.