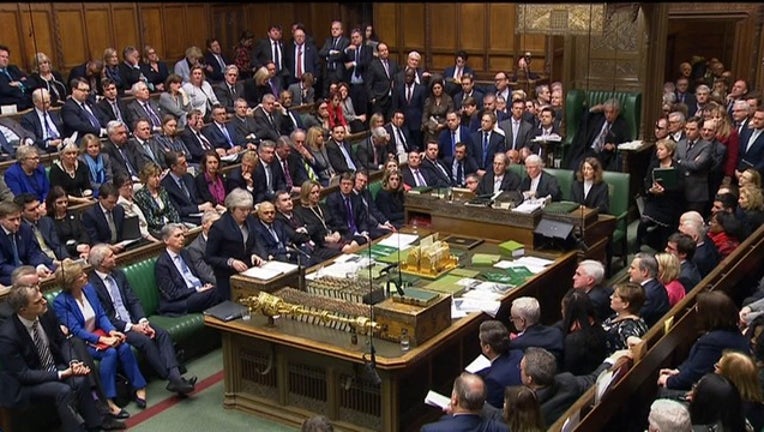 The defeat was widely expected, but the scale of the House of Commons' vote - 432 votes against the government and 202 in support - was devastating for May's fragile leadership.

It followed more than two years of political upheaval in which May has staked her political reputation on getting a Brexit deal and was the biggest defeat for a government in the House of Commons in modern history.

Moments after the result was announced - with Speaker John Bercow bellowing "the noes have it" to a packed Commons chamber - May said it was only right to test whether the government still had lawmakers' support to carry on. Opposition leader Jeremy Corbyn quickly obliged, saying May's government had lost the confidence of Parliament.

Lawmakers will vote Wednesday on his motion of no-confidence. If the government loses, it will have 14 days to overturn the result or face a national election.

Although May lacks an overall majority in Parliament, she looks likely to survive the vote unless lawmakers from her Conservative party rebel. Northern Ireland's Democratic Unionist Party, which props up May's government, said it would support her.

"The House has spoken and the government will listen," May said after the vote, which leaves her Brexit plan on life support just 10 weeks before the country is due to leave the EU on March 29.

May promised to consult lawmakers on future moves, but gave little indication of what she plans to do next. Parliament has given the government until Monday to come up with a new proposal.

She faces a stark choice: Steer the country toward an abrupt "no-deal" break with the EU or try to nudge it toward a softer departure. Meanwhile, lawmakers from both government and opposition parties are trying to wrest control of the Brexit process from a paralyzed government, so that lawmakers by majority vote can specify a new plan for Britain's EU exit.

But with no clear majority in Parliament for any single alternate course, there is a growing chance that Britain may seek to postpone its departure date while politicians work on a new plan - or even hand the decision back to voters in a new referendum on EU membership.

"If you can't resolve the impasse here in Westminster, than you have to refer it back to the people," said Labour Party lawmaker Chuka Umunna, who supports a second referendum.

May, who had postponed a vote on the deal in December to avoid certain defeat, had implored lawmakers to back her deal and deliver on voters' decision in 2016 to leave the EU.

But the deal was doomed by deep opposition from both sides of the divide over U.K.'s place in the bloc. Pro-Brexit lawmakers say the deal will leave Britain bound indefinitely to EU rules, while pro-EU politicians favor an even closer economic relationship with Europe.

The most contentious section of the deal was an insurance policy known as the "backstop" designed to prevent the reintroduction of border controls between the U.K.'s Northern Ireland and EU member Ireland Assurances from EU leaders that the backstop is intended as a temporary measure of last resort completely failed to win over many British skeptics,

Two and a half years after the referendum, Britain remains divided over how, and whether, to leave the EU.

As lawmakers debated in the chamber, there was a cacophony of chants, drums and music from rival bands of pro-EU and pro-Brexit protesters outside. One group waved blue-and-yellow EU flags, the other brandished "Leave Means Leave" placards.

Inside, the government and opposition parties ordered lawmakers to cancel all other plans to be on hand for the crucial vote. Labour legislator Tulip Siddiq delayed the scheduled cesarean birth of her son so she could attend, arriving in a wheelchair

Some Conservatives want May to seek further talks with EU leaders on changes before bringing a tweaked version of the bill back to Parliament, even though EU officials insist the 585-page withdrawal agreement cannot be renegotiated.

Tim Bale, professor of politics at Queen Mary University of London, said May was unlikely to get changes to her deal from that could "placate her Brexiteers."

"Or, she reaches out to Labour and goes for a softer Brexit than most Brexiteers would contemplate" - but which the EU might accept, Bale said.

Frustrated EU leaders called on May to make her intentions clear on the future of Brexit.

"Now, it is time for the U.K. to tell us the next steps," said Michel Barnier, the bloc's chief negotiator.

European Commission president Jean-Claude Juncker - who returned to Brussels late Tuesday to deal with fallout from the vote - said the rejection of May's deal had increased "the risk of a disorderly withdrawal of the United Kingdom."

Economists warn that an abrupt break from the EU could batter the British economy and bring chaotic scenes at borders, ports and airports. Business groups expressed alarm at the prospect of a "no-deal" exit.

"Every business will feel no-deal is hurtling closer," said Carolyn Fairbairn, director-general of the Confederation of British Industry. "A new plan is needed immediately."

European Council President Donald Tusk highlighted the quagmire the U.K. had sunk into, and hinted that the best solution might be for Britain not to leave.

"If a deal is impossible, and no one wants no deal, then who will finally have the courage to say what the only positive solution is?" he tweeted.