KYIV, Ukraine (AP) - Shortly after the United States and European nations agreed Saturday to impose the most potentially crippling financial penalties yet on Russia over its unrelenting invasion of Ukraine, the Ukrainian president’s office said Russian forces blew up a gas pipeline in Kharkiv, the country’s second-largest city.

The SWIFT sanctions go after the central bank reserves that underpin the Russian economy and sever some Russian banks from a vital global financial network.

The decision, announced as Ukrainian forces battled Saturday to hold Russian forces back from Ukraine's capital and residents sheltered in subway tunnels, basements and underground garages, has potential to spread the pain of Western retaliation for President Vladimir Putin's invasion to ordinary Russians far more than previous rounds of penalties.

"Putin embarked on a path aiming to destroy Ukraine, but what he is also doing, in fact, is destroying the future of his own country," EU Commission President Ursula von der Leyen said.

The European Union, United States, United Kingdom and other allies have steadily stepped up the intensity of their sanctions since Russia launched the invasion late last week.

The State Service of Special Communication and Information Protection warned Saturday that the Kharkiv explosion, which it said looked like a mushroom cloud, could cause an "environmental catastrophe" and advised residents to cover their windows with damp cloth or gauze and to drink plenty of fluids.

Ukraine’s top prosecutor, Iryna Venediktova, said the Russian forces have been unable to take Kharkiv, where a fierce battle is underway.

The city of 1.5 million is located 40 kilometers (25 miles) from the Russian border.

RELATED: Who is the 'Ghost of Kyiv'? Tale of Ukrainian fighter pilot trends on social media

Meanwhile, while U.S. and European officials made clear they still were working out the mechanics of how to implement the latest measures, and intend to spare Russia's oil and natural gas exports, the sanctions in total potentially could amount to some of the toughest levied on a nation in modern times. If fully carried out as planned, the measures will severely damage the Russian economy and markedly constrain its ability to import and export goods.

The U.S. and European allies announced the moves in a joint statement as part of a new round of financial sanctions meant to "hold Russia to account and collectively ensure that this war is a strategic failure for Putin." 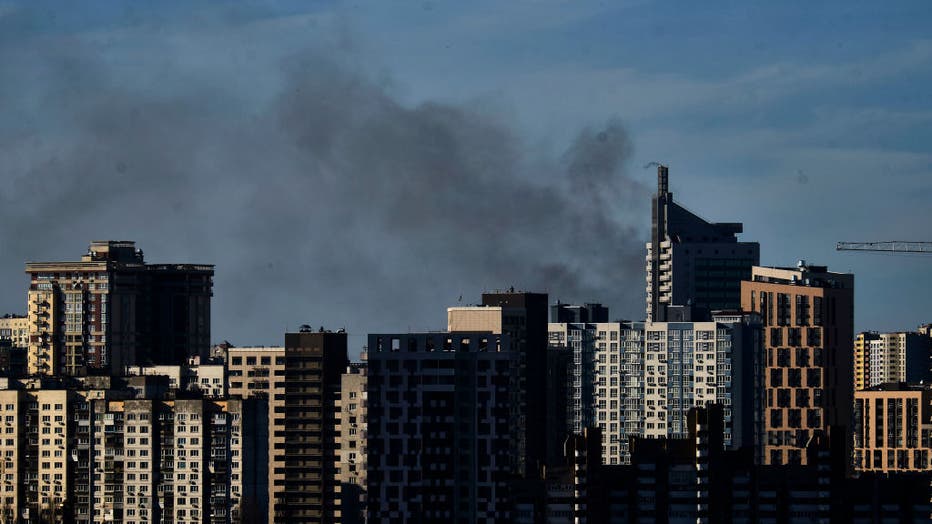 KYIV, UKRAINE - FEBRUARY 26: Smoke is seen rising from buildings on February 26, 2022 in Kyiv, Ukraine. Explosions and gunfire were reported around Kyiv on the second night of Russia's invasion of Ukraine, which has killed scores and prompted widespr

The central bank restrictions target access to the more than $600 billion in reserves that the Kremlin has at its disposal, and are meant to block Russia's ability to support the ruble as it plunges in value amid tightening Western sanctions.

U.S. officials said Saturday’s steps were framed to send the ruble into "free fall" and promote soaring inflation in the Russian economy.

The decline of the ruble would likely send inflation soaring, which would hurt everyday Russians and not just the Russian elites who were the targets of the original sanctions. The resulting economic disruption, if Saturday's measures are as harsh as described, could leave Putin facing political unrest at home.

Analysts predicted intensifying runs on banks by Russians, and falling government reserves as Russians scrambled to sell their targeted currency for safer assets.

The U.S. officials noted that previously announced sanctions have already had an impact on Russia, bringing its currency to its lowest level against the dollar in history and giving its stock market the worst week on record.

Saturday’s move also includes cutting key Russian banks out of the SWIFT financial messaging system, which daily moves countless billions of dollars around more than 11,000 banks and other financial institutions around the world.

The fine print of the sanctions was still being ironed out over the weekend, officials said, as they work to limit the impact of the restrictions on other economies and European purchases of Russian energy.

Allies on both sides of the Atlantic also considered the SWIFT option in 2014, when Russia invaded and annexed Ukraine’s Crimea and backed separatist forces in eastern Ukraine. Russia declared then that kicking it out of SWIFT would be equivalent to a declaration of war. The allies — criticized ever after for responding too weakly to Russia’s 2014 aggression — shelved the idea back then. Russia since then has tried to develop its own financial transfer system, with limited success.

The U.S. has succeeded before in persuading the Belgium-based SWIFT system to kick out a country — Iran, over its nuclear program. But kicking Russia out of SWIFT could also hurt other economies, including those of the U.S. and key ally Germany.

Only rarely has the West and its allies fired a full salvo of its available financial weapons on a country. Iran and North Korea, two previous targets, had far smaller roles in the world economy, while Russia, with its enormous petroleum reserves, plays a much bigger role in global trade, and parts of Europe depend on its natural gas.

Emergency services in Kyiv said six people were injured after a high-rise apartment building was damaged by shelling early on February 26, as the city faced increasing pressure from invading Russian forces. (Credit: Mykola Medinsky via Storyful)

The disconnection from SWIFT announced by the West on Saturday is partial, leaving Europe and the United States room to escalate penalties later. Officials said they had not fully settled on which banks would be cut off.

Announcing the measures in Brussels, the EU Commission president, von der Leyen, said she would push the bloc to "paralyze the assets of Russia’s Central bank" so that its transactions would be frozen. Cutting several commercial banks from SWIFT "will ensure that these banks are disconnected from the international financial system and harm their ability to operate globally," she added.

"Cutting banks off will stop them from conducting most of their financial transactions worldwide and effectively block Russian exports and imports," she added.

Getting the EU on board for sanctioning Russia through SWIFT had been a tough process since EU trade with Russia amounted to 80 billion euros, about 10 times as much as the United States, which had been an early proponent of such measures.

Germany specifically had balked at the measure since it could hit them hard. But Foreign Minister Annalena Baerbock said in a statement that "after Russia’s shameless attack ... we are working hard on limiting the collateral damage of decoupling (Russia) from SWIFT so that it hits the right people. What we need is a targeted, functional restrictions of SWIFT."

As another measure, the allies announced a commitment "to taking measures to limit the sale of citizenship — so-called golden passports — that let wealthy Russians connected to the Russian government become citizens of our countries and gain access to our financial systems."

The group also announced the formation this week of a trans-Atlantic task force to ensure that these and other sanctions on Russia are implemented effectively through information sharing and asset freezes.

"These new sanctions, which include removing several Russian banks from SWIFT and sanctioning Russia’s central bank, are likely to cause serious damage to the Russian economy and its banking system," said Clay Lowery, executive vice president of the Institute of International Finance. "While details on how the new sanctions affect energy are still emerging, we do know that sanctions on its central bank will make it more difficult for Russia to export energy and other commodities."

Rachel Ziemba, an adjunct senior fellow at the Center for a New American Security, said that even without a complete SWIFT ban, "these measures will still be painful to Russia’s economy. They reinforce the measures already taken earlier this week by making transactions more complicated and difficult."

Ziemba says how much pain the sanctions render on the Russian economy will depend on which banks are restricted and which measures are taken to restrict the ability of the Central Bank to operate.

"Regardless, these sort of escalating sanctions, removing banks from SWIFT, restricting the Central Bank, this will all make it more difficult to get commodities from Russia and will increase the pressure on the financial market."

Meantime, the U.S. Embassy in Russia is warning Americans of multiple reports of non-Russian credit and debit cards being declined in Russia. In a tweet Saturday night, the American Embassy said the problem appears to be related to recent sanctions, imposed on Russian banks following the Russian invasion of Ukraine. The embassy says U.S. citizens in Russia should be prepared with alternate means of payment should cards be declined. It also reminded U.S. citizens that the State Department advises against travel to Russia.