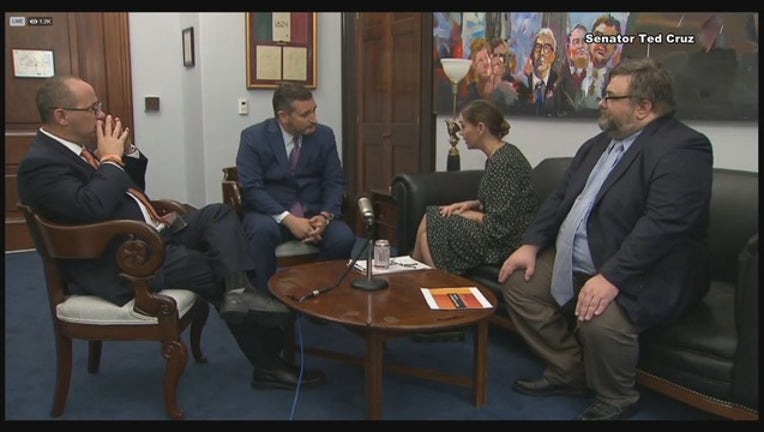 The face to face meeting between U.S. Senator Ted Cruz and actress and activist Alyssa Milano was much more civil than their gun law fights on social media.

Milano accepted the Texas senator's invitation for the meeting in Washington which was streamed on Facebook. The two are far apart when it comes to their views on background checks and assault weapons.

The unlikely meeting at the U.S. Capitol happened Tuesday between Cruz and Milano.

It started with a tweet from Milano Sept. 1 in which she asked, "Can someone cite which passage of the Bible God states it is a god-given right to own a gun?"

Cruz then replied, "An excellent [question], worth considering carefully [without] the snark of Twitter."

That's how two people from two ends of the political spectrum came together for a civil conversation on gun control.

Milano asking Cruz to "be a hero" to support stricter gun laws, including mandatory background checks on person to person gun sales and banning assault weapons.

"What I think is effective is focusing on the bad guys. Focusing on felons and fugitives and those with serious mental illness," the U.S. Senator said.

Cruz touted the bill he re-introduced with Senator Chuck Grassley last spring that would prosecute felons and fugitives who try to get guns, among other things.

"The Odessa shooter initially tried to buy a firearm from a licensed dealer. He was denied. He was denied because he had been committed, adjudicated, to have mental illness. What I don't know is if he lied on his form," Cruz said. "If he did lie on his form, under Grassley Cruz, which I'm pushing us to pass, we would've prosecuted him and we could've prevented Odessa."

Milano told Cruz he's become like a "caricature of a villain" when it comes to gun reform, which is why she wanted to meet with him to know he's a "human with a heartbeat."

"I think you could be an instrumental part of the solution for this country," Milano said.

Milano tweeted after, "I just left. He was gracious. I'm unsure if it changes anything. But appreciative for the opportunity to bridge the divide with civil, meaningful discussion."

Cruz also posted to Facebook after the meeting saying it was "productive and respectful."

Fred Guttenberg, the father of 14-year-old Jaime Guttenberg killed in the Parkland High School shooting, now a gun control activist, was also in the meeting. He said he will read up on Cruz's bill and tweeted after that Cruz was "gracious" and he looks forward to working with him in the future.