Two teens arrested for string of violent robberies across Fort Worth

Fort Worth police arrested two teenagers connected to a string of violent crimes throughout the city.

FORT WORTH, Texas - Fort Worth police arrested two teenagers connected to a string of violent crimes throughout the city.

Victims reported being punched and thrown out of their cars. One victim reported hearing gunfire as he tried to drive away from his attackers.

Fort Worth investigators say at least eight of the crimes happened in six days. Two teenagers are in custody. Fort Worth police have identified a third person but have not arrested them.

Investigators say witness statements and evidence led them to arrest 17-year-old Isaiah James and a 16-year-old minor. They’re accused in a string of violent incidents throughout Fort Worth. 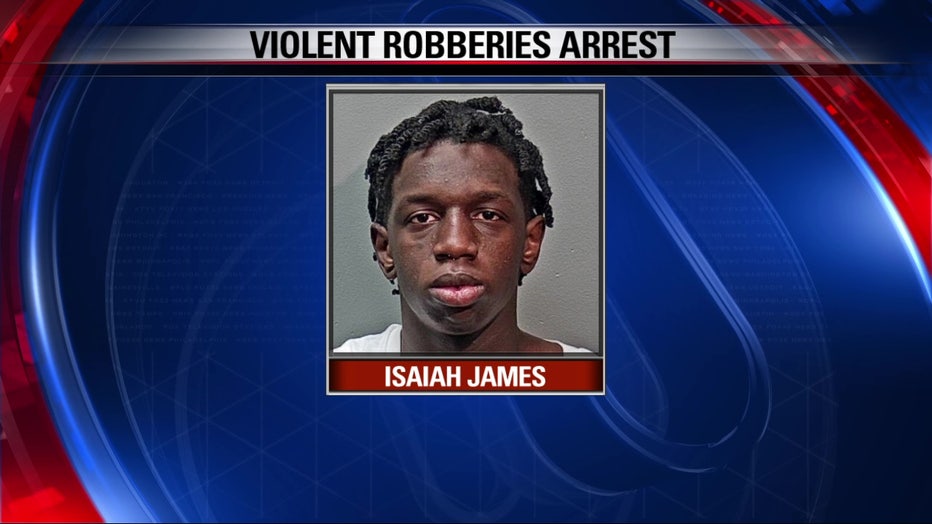 The suspects are linked to at least eight robberies. Many of them are in the South Hulen area, including four incidents where the victim was attacked.

All of the crimes happened last week. Two attacks happened at the same location on the same day.

Police say the first incident happened at a Jack in the Box near Downtown Fort Worth. Police say two men hit a customer in the face through the open window of his car at the drive-thru. The victim got out of the car to defend himself. That’s when the suspects got in the car and drove away. His phone and wallet were inside.

Two days later at the Chase Bank on South Hulen, police say a group of people in a white pickup blocked a person trying to leave the drive-thru ATM. Someone got out, opened the victim’s car door and stole the cash that was still in the victim’s hand. Another person came up to the car and started repeatedly punching the victim in the head. The attackers got away.

Later in the day, another victim at the same bank left the ATM and drove to the front of the bank. Police say two teenagers came up to the car and tried to open the car door as the victim tried to drive off. The victim said he “several quick pops” and realized someone was shooting at him. Police found several shell casings at the scene.

Last Saturday, two customers were at the Buffalo Wild Wings on Hulen Street to pick up a to-go order. Police say a group of men in a stolen car came up while the driver was getting out. They attacked the driver and the passenger and then stole their car.

“Anytime we have a victim in our city, it is troubling for us. Anytime we have someone that has been robbed, whatever the case may be it is always a concern for us,” said Fort Worth Police Sgt. Chris Daniels. “The advantage that we have on this one is the detectives knew early on that these were possibly related and we ended up catching the people related in all of this.”

In addition to the incidents, Fort Worth police described the trio is also suspected of being involved in robberies at a shopping center in South Fort Worth as well as a restaurant, a store and a plasma center near the Hulen Mall.