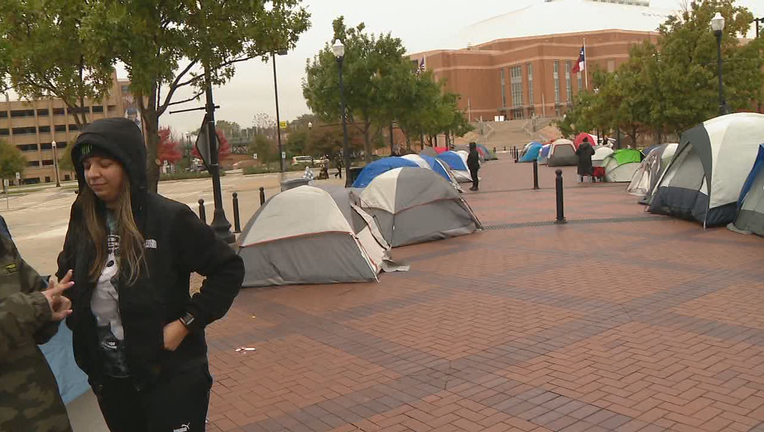 FORT WORTH, Texas - Fans of the musical due Twenty One Pilots camped out in the cold near the new Dickies Arena in Fort Worth overnight.

The indie-rock concert Friday night will be the very first one in the new multipurpose arena.

Despite the chill, people started setting up their tents up outside the venue Thursday afternoon in hopes of being among the first through the doors.

The floor seats are general admission so those who are first in line will have a better chance of getting close to the stage for the concert.

Dedicated fan Malorie Soulier spent the night in a tent wearing a fuzzy dragon onesie. She said it helped to keep her warm. When asked if it was worth it, she said absolutely.

“Just the music relates to everyone and performance-wise they just really get with us,” she said.

Music fans camp in the cold outside Dickies Arena

Fans of the musical due Twenty One Pilots camped out in the cold near the new Dickies Arena in Fort Worth overnight.

Michael Guajardo showed up after sunrise for “breakfast duty.”

“My daughter McKayla and her friend Allison have been here all night. They wouldn’t allow me to stay with him in the evening. They made me go home. But I did have breakfast duty so I brought some Chick-fil-A minis and work them up. They were still sound asleep. But they got their wristbands and they’re ready to go in,” he said.

Friends Trey McGovern and Samantha Dietz said they arrived around 2 a.m. and spent most of the time inside their truck where it was pretty warm.

The group plans to spend the day with other fans while waiting for the doors to open at 6:30 p.m. The show starts at 8 p.m.