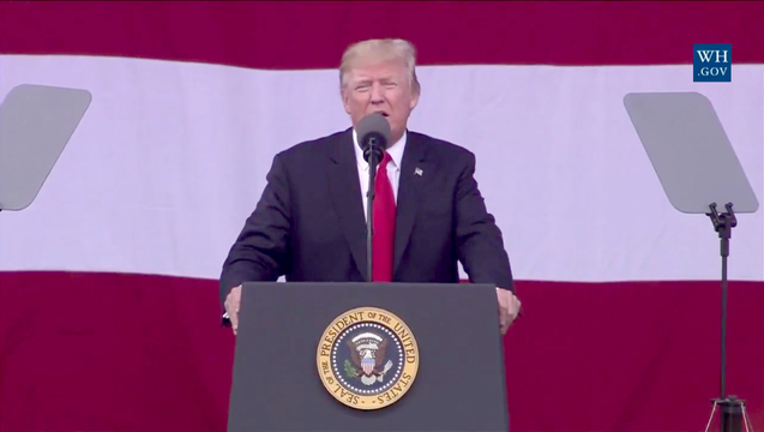 CHARLESTON, W.Va. - No knot-tying demonstrations. No wood-carving advice. President Donald Trump went straight to starting a fire in a speech at a national Boy Scout gathering.

Parents, former Scouts and others were furious after Trump railed against his enemies, promoted his political agenda and underlined his insistence on loyalty before an audience of tens of thousands of school-age Scouts in West Virginia on Monday night.

"Is nothing safe?" Jon Wolfsthal, a former special assistant to President Barack Obama, wrote on Twitter, saying Trump turned the event into a "Nazi Youth rally."

Trump, the eighth U.S. president to address the Scouts' National Jamboree, was cheered by the crowd, but his comments put an organization that has tried in recent years to avoid political conflict and become more inclusive in an awkward position.

The knot-tying was left to Democratic Sen. Chris Murphy of Connecticut, who said on Twitter that his stomach was in knots over the president's over-the-top delivery.

"If you haven't watched it yet, don't," Murphy said. "It's downright icky."

The Boy Scouts' official Facebook page was barraged with comments condemning the speech. Several people posted links to the Scouts' policy on participation in political events - which sharply limits what Scouts should do. Boy Scouts are typically 10 to 18 years old.

One woman wrote in disbelief that the Scouts started booing when Trump mentioned Obama.

Trump noted from the podium that Obama did not personally attend either of the two national Jamborees during his tenure. (Obama did address the 2010 gathering by video to mark the Scouts' 100th anniversary. The Jamboree is typically held every four years.)

The pushback from Americans over the speech included members from both parties.

"I just don't think it was appropriate," said Rob Romalewski, a Republican and retired information-technology expert from suburban New Orleans who attained the rank of Eagle Scout as a teenager and has worked with the Boy Scouts all his adult life.

"It just doesn't seem like he was talking to the boys," Romalewski said. "He was more or less just using it as an excuse to babble on."

Nancy Smith, a Democrat and elementary school teacher in Utica, Michigan, said she won't encourage any of her six grandchildren to enter Scouting. Smith is asking for an apology from the national group.

The Boy Scouts of America said in a statement after the speech that it does not promote any one political candidate or philosophy. The organization did not immediately respond to questions about the blowback.

Trump kicked off his speech by saying, to cheers from the boys, "Who the hell wants to speak about politics when I'm in front of the Boy Scouts? Right?" Yet much of what he had to say next was steeped in politics.

Trump began to recite the Scout law, a 12-point oath that starts with a Scout being trustworthy and loyal.

"We could use some more loyalty, I will tell you that," said the man who is alleged to have asked fired FBI Director James Comey for a pledge of loyalty.

In his speech, Trump also jokingly threatened to fire Health Secretary Tom Price - an Eagle Scout who joined him on stage - if lawmakers do not repeal and replace Obama's health care law. He called Washington a "swamp," a "cesspool" and a "sewer." He repeatedly trashed the media, directing the crowd's attention to the reporters in attendance.

In one aside, he told the boys they could begin saying "Merry Christmas" again under his watch. In another, he talked about a billionaire friend - real estate developer William Levitt - who sold his company, bought a yacht and led "a very interesting life."

"I won't go any more than that, because you're Boy Scouts, so I'm not going to tell you what he did," Trump teased. Then he said he had run into the man at a cocktail party. The moral of Trump's tale was that Levitt "lost momentum," something he said they should never do.

Levitt is often considered the father of postwar American suburbia, founding communities such as Levittown on New York's Long Island, but was criticized for refusing to sell to blacks.

In the past few years, the Boy Scouts have retreated from the culture wars, dropping their ban on gay Scouts and Scout leaders, and have tried harder to recruit minorities.

Zach Wahls, an Eagle Scout and co-founder of Scouts for Equality, a nonprofit group that has pushed to end discrimination against gay and transgender people in Scouting, said Trump's remarks "really harmed the Boy Scouts' ability to do that work, which is all about serving America."