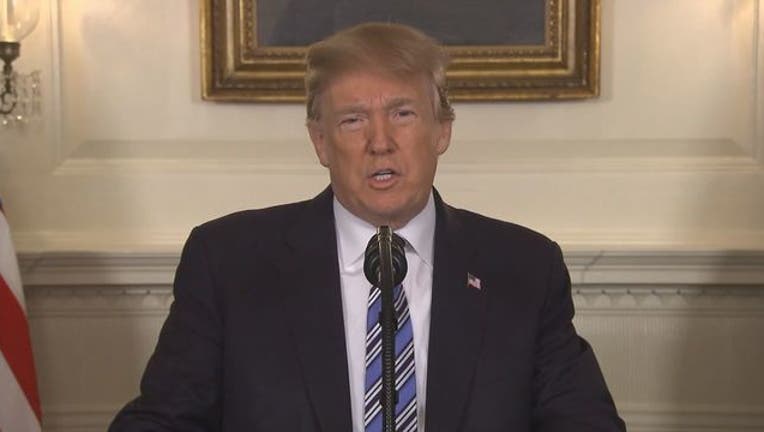 WASHINGTON (AP) - President Donald Trump said Monday that he is "watching court cases and rulings" before taking action on raising age limits for purchasing some firearms, arguing that there is "not much political support (to put it mildly)."

Trump's tweet came after his White House put out a plan to combat school shootings that doesn't increase the minimum age for purchasing assault weapons to 21 - an idea Trump publicly favored just last month - and leaves the question of arming teachers to states and local communities.

Instead, a new federal commission on school safety will examine the age issue as part of a package the White House announced Sunday in response to the school shooting in Parkland, Florida, last month that left 17 dead.

Trump described the effort as a "very strong improvement" and said, "Armed guards OK, deterrent!" On age limits, he said: "watching court cases and rulings before acting. States are making this decision. Things are moving rapidly on this, but not much political support (to put it mildly)."

Education Secretary Betsy DeVos, who on Sunday called the proposal "meaningful actions, steps that can be taken right away to help protect students," said Monday that the plan was "the first step in a more lengthy process."

No deadline was set for the commission's recommendations, but officials expected them within a year.

Pressed repeatedly Monday on NBC about why the White House backed off Trump's support for increasing the minimum age for purchasing assault-style weapons, DeVos said that "everything is on the table," stressing that the commission will study a wide range of issues.

The administration also pledged to help states pay for firearms training for teachers and reiterated its call to improve the background check and mental health systems.

DeVos declined to say how many teachers should be armed.

At a rally in Pennsylvania on Saturday, Trump criticized policy commissions while speaking about the opioid problem, saying, "We can't just keep setting up blue-ribbon committees."

The plan was immediately panned by gun control advocates, including the Brady Campaign to Prevent Gun Violence.

Senate Minority Leader Chuck Schumer, D-N.Y., described it as "tiny baby steps designed not to upset the NRA, when the gun violence epidemic in this country demands that giant steps be taken."

Trump was deeply moved by the Florida school shooting and convened a series of listening sessions in the weeks after the massacre. In televised meetings with lawmakers, survivors of recent school shootings and the families of victims, Trump made a strong case for arming teachers and for increasing the age for purchasing long guns.

"I mean, so they buy a revolver - a handgun - they buy at the age of 21. And yet these other weapons that we talk about ... they're allowed to buy them at 18. So how does that make sense?" he told school officials last month. "We're going to work on getting the age up to 21 instead of 18."

But Trump has also spoken repeatedly in recent weeks with the heads of the powerful National Rifle Association, which considers increasing the age of purchase to be an assault on the Second Amendment. The NRA on Friday sued Florida over a new gun law signed by Republican Gov. Rick Scott that bans the purchase of firearms by anyone under the age of 21.

During the meetings, Trump also advocated arming certain teachers and school staffers, arguing that gun-free schools are "like an invitation for these very sick people" to commit murder.

As part of the plan, the White House has directed the Justice Department to help states partner with local law enforcement to provide "rigorous firearms training to specifically qualified volunteer school personnel," said Andrew Bremberg, director of the president's Domestic Policy Council. The White House did not immediately say how much money would be made available.

Trump also called on states to pass court-issued Risk Protection Orders, which allow law enforcement to confiscate guns from individuals who pose risks to themselves and others, and temporarily prevent them from buying firearms. And he called for the reform and expansion of mental health programs, as well as a full audit and review of the FBI tip line. The bureau has been criticized for not following up on warnings about the suspect in the Parkland school shooting.

The White House is also calling on Congress to pass two pieces of legislation.

One would improve the National Instant Criminal Background Check system by penalizing federal agencies that don't properly report required records and reward states that comply by providing them with federal grant preferences.

The other would create a federal grant program to train students, teachers and school officials on how to identify signs of potential violence and intervene early.