WASHINGTON - The House Jan. 6 committee on Monday urged the Justice Department to consider prosecuting Donald Trump for four different crimes — actions that touch not only the former president’s efforts to undo the results of the 2020 presidential election but also his behavior during last year's insurrection at the U.S. Capitol.

The committee's referrals to the Justice Department carry no legal weight since federal prosecutors are already conducting their own investigation and are the sole deciders of whether to pursue charges against Trump. That investigation is being led by a newly named special counsel, Jack Smith, who has already signed off on a flurry of subpoenas but has made no public statements about what direction his criminal probe will take.

Nonetheless, the committee said during its final public meeting that it regarded its report as providing a "roadmap to justice" — and indeed, focus now shifts to the Justice Department and whether it will concur that the evidence is sufficient for prosecution.

Trump said in a statement that "these folks don’t get it that when they come after me, people who love freedom rally around me. It strengthens me. What doesn’t kill me makes me stronger."

A look at the statutes the committee cited in its referral:

Obstruction of an official proceeding

Legal experts began discussing this as a potential charge for Trump and associates soon after the riot. In this case, an official proceeding refers to the Jan. 6, 2021 joint session of Congress at which electoral votes were to be counted and Democrat Joe Biden was to be certified as the lawful winner.

The committee said it amassed substantial evidence that Trump sought to obstruct that process, including by summoning supporters to Washington on the day Congress was meeting and through a relentless but ultimately unsuccessful pressure campaign aimed at getting Vice President Mike Pence to prevent the votes from being certified. Testimony to the committee also showed how Trump hectored local officials to affect the outcomes of their states' vote in his favor.

The panel also referred conservative lawyer John Eastman for prosecution on the same statute. Eastman had devised legal maneuvers to help keep Trump in power, despite being cautioned by others in Trump's orbit that such plans were illegal. A lawyer for Eastman did not return a message seeking comment.

The Justice Department has brought obstruction of an official proceeding charges against dozens of rioters. It’s among several serious charges facing former Proud Boys leader Enrique Tarrio and four other members of the extremist group whose Capitol riot trial began on Monday with jury selection.

Oath Keepers founder Stewart Rhodes and four associates were convicted of the obstruction charge last month. Rhodes, who was also convicted of seditious conspiracy, didn’t go into the Capitol but was accused of leading a violent plot to stop the peaceful transfer of power. He was acquitted of conspiracy to obstruct an official proceeding.

Conspiracy to defraud the United States

This is a general statute that makes it a crime to work with someone else to carry out fraud against the U.S.

The committee says Trump did exactly that by trying to obstruct the certification of the election despite being told by aides that there was no fraud that could have affected the outcome, by angrily beseeching Pence to delay that certification even though he was told there was no legal basis for him to do so, and by working with others, both inside of government and out, on a "multi-part plan" to stay in power.

The panel also recommended Eastman for prosecution on the same count, noting that a federal judge in California had already concluded in a separate lawsuit that evidence of a criminal conspiracy likely existed.

The committee says other Trump associates engaged in the same conspiracy, though it did not attempt to identify all of them since many refused to cooperate with the panel.

But among the names the committee did single out in a summary of its report was Jeffrey Clark, a former senior Justice Department official who had pledged to advance Trump's efforts to undo the presidential election results if named to the position of acting attorney general — that did not happen.

Clark cited his Fifth Amendment privilege against self-incrimination in refusing to answer the committee's questions.

Conspiracy to make a false statement 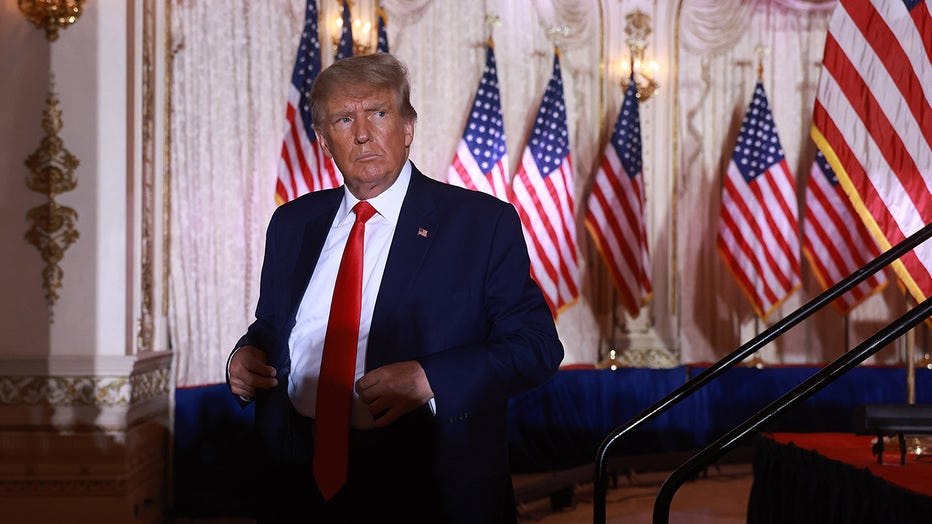 Former U.S. President Donald Trump leaves the stage after speaking during an event at his Mar-a-Lago home on November 15, 2022 in Palm Beach, Florida. (Photo by Joe Raedle/Getty Images)

This statute touches on conduct that the Justice Department is already known to be investigating — an alleged scheme by Trump allies to submit "fake electors" in battleground states won by Biden as a way to obstruct the certification of the results and invalidate Biden's victory.

Those electors signed "patently false" certifications, the committee says, and the panel maintains it has evidence Trump was a participant in the scheme.

Months ago the Justice Department issued grand jury subpoenas to the "fake electors" in multiple states, underscoring prosecutors' interest in the activity.

Inciting or aiding an insurrection 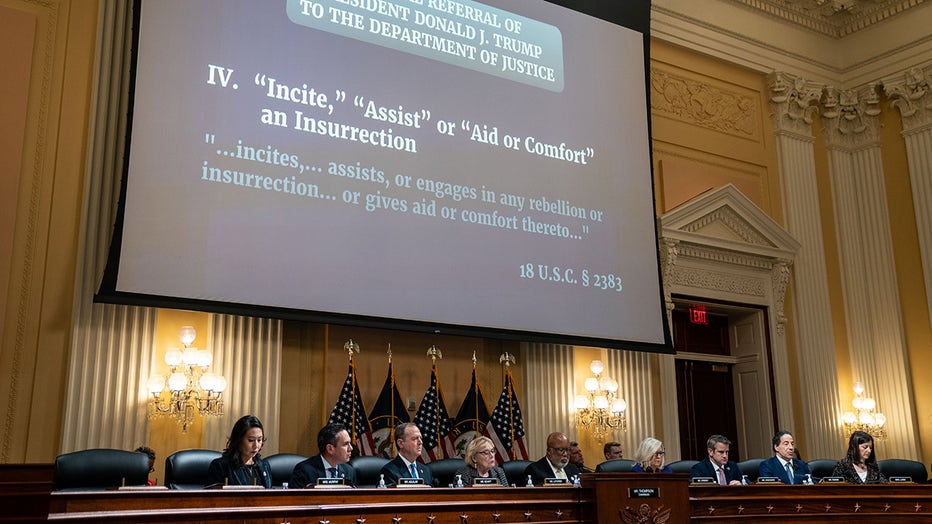 "Criminal Referral Of President Donald J. Trump To The Department Of Justice" is displayed on a screen as the House Select Committee to Investigate the January 6th Attack on the United States Capitol conducts its final hearing in the Cannon House Off

The inclusion of this statute represents an attempt by the committee to hold Trump accountable for the riot itself — not only for his actions but for his inaction, too.

Under the statute, Trump need not have coordinated with supporters to carry out a rebellion. Instead, one could violate the statute simply by aiding an insurrection or giving comfort to those actually participating in it.

Trump was impeached by the House, though later acquitted by the Senate, on a charge of incitement after the attack on the Capitol. Some legal experts have questioned whether the Justice Department could successfully prosecute Trump for inciting the insurrection based on a speech he gave at the Ellipse that preceded the riot. In that address, he encouraged the crowd to "fight like hell" but also told them to proceed peacefully to the Capitol.

The committee says Trump summoned rioters to Washington on Jan. 6 with the goal of mobilizing a large crowd of supporters — in fact, the committee observes, some of the accused rioters charged by the Justice Department have cited Trump's tweets encouraging them to come as their inspiration.

Once they were inside the building, the committee notes, Trump showed no concern when they chanted "Hang Mike Pence!" and for hours the president resisted the pleas of advisers who told him to tell the rioters to disperse.

"The final words of that tweet leave little doubt about President Trump’s sentiments toward those who invaded the Capitol: ‘Remember this day forever!’" the committee wrote.

Interestingly, the statute bars anyone convicted of it from holding future office. Rep. Liz Cheney of Wyoming, the panel's Republican vice chair, asserted Monday that Trump can never "serve in any position of authority in our nation again."