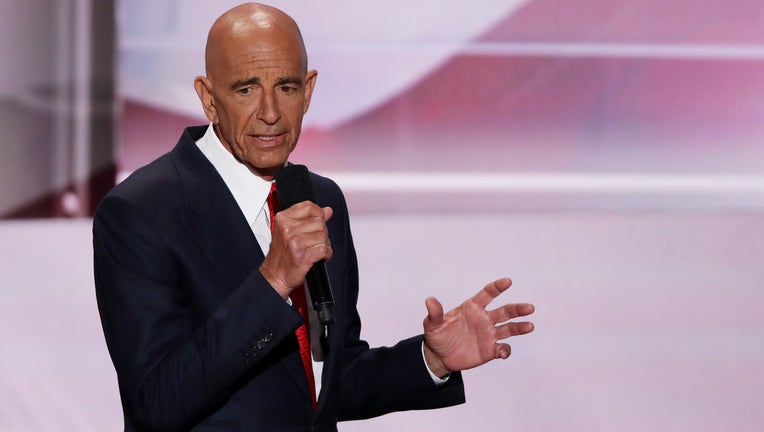 Tom Barrack, former Deputy Interior Undersecretary in the Reagan administration, delivers a speech on the fourth day of the Republican National Convention on July 21, 2016 at the Quicken Loans Arena in Cleveland, Ohio. (Photo by Alex Wong/Getty Image

LOS ANGELES - Thomas Barrack, the chair of former President Donald Trump's 2017 inaugural committee and two others have been federally charged in a seven-count indictment, according to the U.S. Department of Justice.

Barrack, Matthew Grimes, and Rashid Sultan Rashid Al Malik Alshahhi allegedly acted and conspired to act as agents of the UAE between April 2016 and April 2018 to influence the presidential election, public opinion and the U.S. government, according to a press release from the DOJ.

Barrack, 74, is also charged with obstruction of justice and making multiple false statements during a June 20, 2019 interview with federal law enforcement agents.

Matthew Herrington, an attorney for Barrack, did not immediately return an email from the Associated Press seeking comment. Barrack was due to appear in federal court in Southern California.

DOJ officials said Barrack and Grimes, 27, were arrested this morning in California and are expected in court later today at a federal courthouse in Los Angeles.

Federal investigators alleged the men took numerous steps in the United States to advance the interests of the UAE.

They also alleged in May 2016, Barrack reportedly inserted language praising the UAE into a campaign speech to be delivered by the then-presidential candidate about United States energy policy in May 2016 and emailed an advance draft of the speech to Alshahhi for delivery to senior UAE officials.

Manhattan's district attorney has convened the grand jury that is expected to decide whether to indict former president Donald Trump, other executives at his company or the business itself should prosecutors present the panel with criminal charges, according to two people familiar with the development.

After one appearance in which Barrack repeatedly praised the United Arab Emirates, Barrack emailed Alshahhi, "I nailed it....for the home team," referring to the UAE, according to investigators.

It is also alleged in December 2016, Barrack met with Grimes, Alshahhi and senior UAE government officials, during which he advised them to create a "wish list" of U.S. foreign policy items that the UAE wanted accomplished in the first 100 days, six months, year and four years of the incoming administration of the United States President-Elect.

On multiple occasions, Barrack referred to Alshahhi as the UAE’s "secret weapon" to advance its foreign policy agenda in the United States, according to the indictment.

DOJ officials also alleged Barrack sought an appointment to a senior government role, including the role of Special Envoy to the Middle East. This, while serving as the Executive Chairman of a global investment management firm headquartered in Los Angeles. DOJ officials pointed out that Grimes was employed at the firm and reported directly to Barrack. At the same time, Alshahhi worked as an agent of the UAE and was in frequent contact with Barrack and Grimes, including numerous in-person meetings in the United States and the UAE.

"American citizens have a right to know when foreign governments, or their agents, are attempting to exert influence on our government," FBI Assistant Director-in-Charge Sweeney said in a statement. "This case is about secret attempts to influence our highest officials, and when that corrupt behavior was discovered, we allege Mr. Barrack went even further, obstructing and lying to FBI special agents.

The government’s case is being handled by the Office’s Public Integrity Section. Assistant United States Attorneys Nathan Reilly, Ryan Harris, Samuel Nitze and Hiral Mehta of the Eastern District of New York and Trial Attorney Matthew McKenzie from the Justice Department’s Counterintelligence and Export Control Section are in charge of the prosecution.