This week’s Trackdown looks back at the broad daylight shooting into a group of people at a Pleasant Grove apartment complex. Multiple people were wounded, including a 4-year-old.

DALLAS - This week’s Trackdown looks back at the broad daylight shooting into a group of people at a Pleasant Grove apartment complex. Multiple people were wounded, including a 4-year-old.

This is the first time video of the shooter has been released. Police say a woman was driving a black compact car.

It was a wild shooting in a packed apartment complex. A 4year-old that was shot is still in a cast. It’s a shooting that brought an outcry about the increasing violence across communities.

The wanted shooter is a woman caught on tape but still at large.

"She was part of the disturbance between two groups of people here in this breezeway," explained Dallas Police Det. Yahir Perez. "We see her park around this area, and she got out. She's standing with a group of individuals that were arguing out here. She was just standing in the background with her hand inside her purse the whole time. And all of a sudden, she pulled the gun out of her purse and just started shooting into the crowd."

Perez says a woman opened fire at 326 North Jim Miller Road on June 11 at about 4:35 p.m., striking five people, including a 4-year-old who is still in a cast. 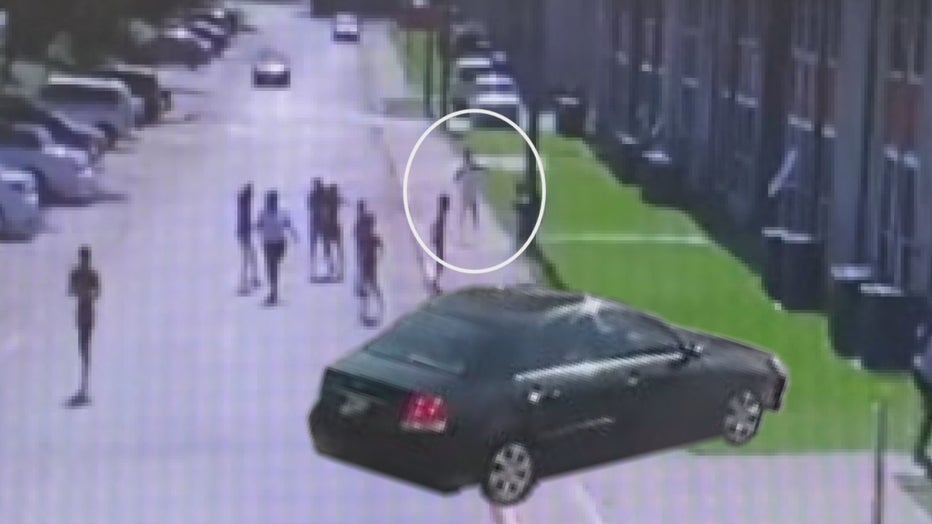 It’s a shooting that saw activists try to shake a community to action.

"I work in a specialized unit called the non-fatal shoot team, and we're working a lot of shootings right now," Perez said. "And we’re not getting a lot of help."

Detective Perez hopes that changes with this case.

The car had paper tags so detectives can't chase the plates.

"It looked like the argument was over as the people started to walk away. She pulled out the gun, shot into the breezeway, ran into her car and left," Perez said. "I believe somebody knows who she is maybe around from this area, and we need to get the public to help us."