This week's Trackdown looks at a shooting in July where an innocent bystander was shot in the head.

DALLAS - This week's Trackdown looks at a shooting in July where an innocent bystander was shot in the head.

It happened outside a busy Jerry's Market in West Dallas. Thankfully, the victim did survive after being caught in the crossfire of a gun battle.

Dallas police don't have a suspect, but video posted on social media shows the person detectives want to talk to. He was in a white shirt and drove a maroon Chevy pickup with sporty chrome rims.

Detective Christine Smith is hoping to get a name for a person of interest as she tries to solve the bold shooting that happened just before 1 p.m., back on July 19.

"It’s very troubling because we have a lot of great citizens here in West Dallas, and people come to the store to buy whatever they need or hang out here with friends, and just because they're getting caught in the crossfire. I mean, it’s just a terrible situation," Det. Smith explained.

Police are working to identify the man seen on video in a white shirt and red shorts, with what looks like a rifle. 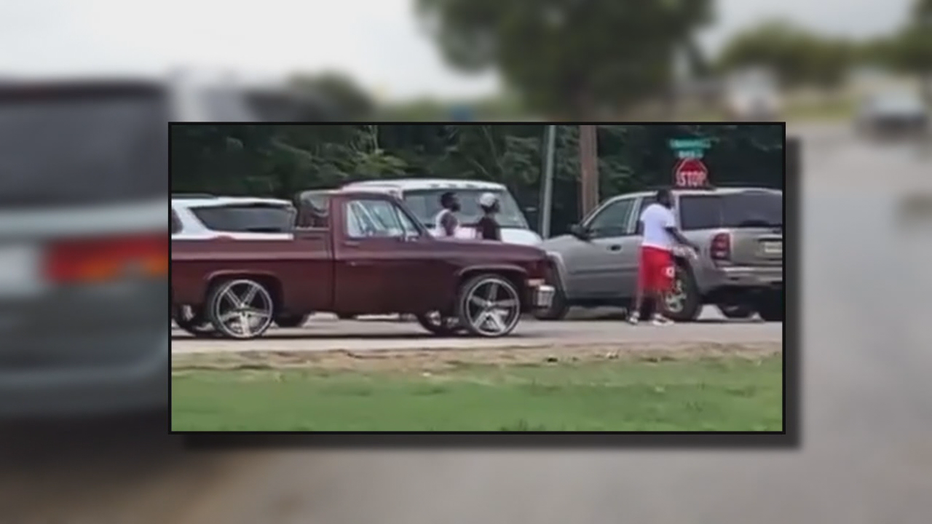 He’s a person of interest in a fatal shooting outside Jerry’s Market, a corner store in the 3300 block of Bernal Drive.

Someone across the street started recording video, and caught the person of interest, with what looks like a rifle, take cover, before going to a maroon Chevy pickup.

"The video looks like he is hiding behind a vehicle, as if he was taking cover, then he quickly gets into his vehicle and flees the location," Det. Smith said. "We see a man with a gun at the same time that the incident occurred, so right now, he's just a person of interest and we'd like to talk to him to get his account of events."

Police believe someone may be able to recognize him or the vehicle he left the scene in.

Anyone with information is asked to call Det. Smith at 214-671-4732 or email her at christine.smith@dallascityhall.com.