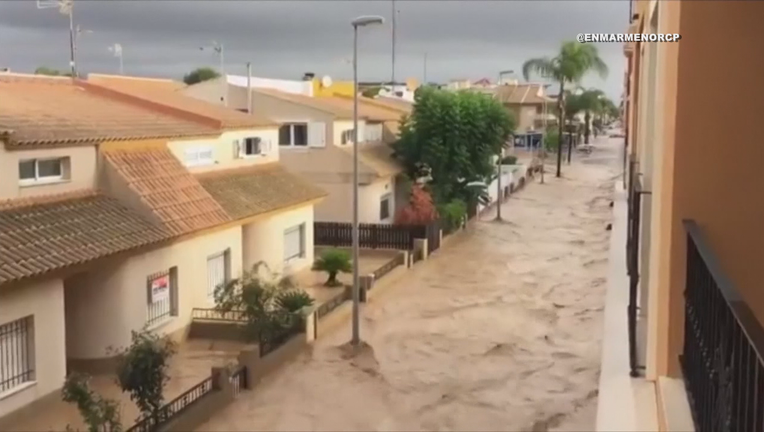 The storm that slammed into the Mediterranean coastal regions of Valencia, Murcia and eastern Andalusia on Thursday and Friday left more than 3,500 people in need of emergency rescues, Interior Minister Fernando Grande-Marlaska said. Some towns and cities reported their heaviest rainfall on record over the past two days, he added.

The downpour forced the closure of airports in Almeria and Murcia as well as intercity train lines, major roads and schools. Authorities asked residents to avoid driving. At least one major reservoir hit its peak capacity and was releasing water Friday, which could bring another surge in river levels.

Sergio Gil, head of the Civil Protection Agency in Los Alcázares, said the Murcia coastal region of around 15,000 people was almost completely flooded.

"We're rescuing someone every 10 minutes," he told Onda Cero radio. "Rain is falling like there's no tomorrow. It's incredible."

The city of Almeria, on the Mediterranean coast, said one man died after being trapped in a car when it drove into a flooded tunnel on Friday. Police said the victim was a 48-year-old man who ignored police warnings, the news agency Europa Press reported. Police said his brother was also in the car but managed to swim to safety.

Emergency services in Andalusia said a 36-year-old man died when his car was submerged in the town of Jámula, 100 kilometers (62 miles) inland from Almeria.

On Thursday, emergency services found a 51-year-old woman and her 61-year-old brother dead inside an overturned car that had been caught by the rising water.

The storms in this part of Spain are a yearly metrological phenomenon in the fall, but they have been particularly fierce this year, turning roads into muddy rivers that sweep away everything in their path.

In the town of Orihuela, 200 kilometers (124 miles) south of Valencia, the Segura River overflowed its banks. The weather service for Valencia said 12 centimeters (4.7 inches) of rain had fallen in just six hours in Orihuela on Friday morning.

The surging Segura River forced police to close all the bridges crossing it in the city of Murcia. Brown-colored water coursed through the city' streets, carrying away parked cars and inundating the bottom floors of houses in many riverside towns.

"The storms have picked up and we are still in a very difficult situation due to the overflowing of the river," Valencia's regional president Ximo Puig told TVE.

The Spanish weather service AEMET maintained its alert for the region, saying it is "at extreme risk" from torrential downpours.

Army units backed up police, firefighters and rescuers to answer the hundreds of calls for help. Around 1,000 soldiers were being deployed.

On a highway near the Alicante town of Pilar de la Horadada, rescuers in a small rubber boat were towed upstream by a jet ski into a flooded tunnel where four people were trapped on top of their cars. They later rowed out with the rescued travelers.

The mayor of Los Alcázares, Íñigo Alfonso, asked for more boats to help search for stranded residents in the town, where video showed streets and squares that were submerged by floodwaters.

Emergency services for the region of Murcia, which is south of Valencia, rescued 391 people from cars and flooded homes, including some by police helicopters from the roofs of buildings surrounded by water.

The Spanish representative for Murcia said army units rescued 60 people from a campsite that had been cut off by the floods.

"All the region of Murcia is flooded. We have never seen this situation before," regional leader Fernando López Miras told TVE.

The rain was forecast to ease on Saturday.