One Tarrant County school district will increase security at sporting events after a threat at a homecoming game. Officers arrested two teenagers who may have been planning a shooting.

EVERMAN, Texas - Two days after authorities arrested two people in relation to a "credible and potentially imminent threat" at the Everman High School homecoming game Friday night, the Tarrant County Sheriff’s Office still has not released the names of the two people arrested.

Many who were at the game fear what could have been.

Fans, however, had no idea it was nearly the scene of a possible mass shooting. 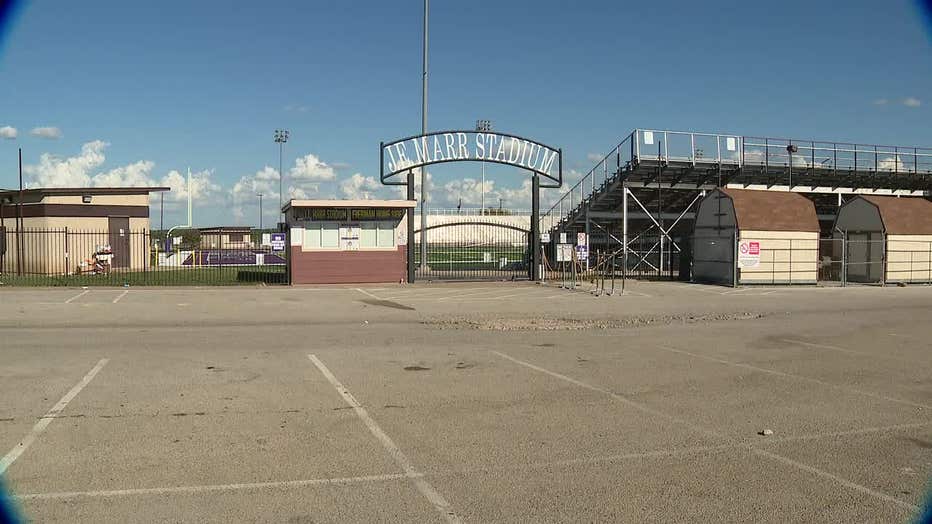 "I don’t know how quick it would take the police to get there, to wherever the shooter is," said retired Everman High School teacher David Boyd, who was in the stands. "If you know somebody’s plotting something, report it. Save lives."

Everman police said that’s exactly what happened after a tip was reported to a Tarrant County Sheriff’s Office deputy about someone plotting to shoot multiple people at the game. That was then relayed to officers already working security.

When the suspect arrived, police said they located an AR-15 pistol in their vehicle. A 17-year-old and an 18-year-old were each charged with unlawful carrying of a firearm in prohibited places.

A 10-year-old was also with them. That child was later released to his or her parents.

The motive of the potential shooting is not exactly clear.

"Some ‘beef’ that he was trying to take out with a group of people. We do not know the identity of the actual targets," Everman Police Chief Craig Spencer said.

Two adults and one juvenile were taken into custody Friday evening after authorities received information about a "credible and potentially imminent threat" at the Everman High School Homecoming game.

Police said a 60-round fully loaded magazine was found with the AR-15 pistol.

[REPORTER: "How bad could this have been?"]

"With the 60 rounds that he supposedly had? Bad," Boyd responded.

Boyd said the stadium was packed and there wasn’t even enough room for him to sit in the home team bleachers.

"I’m just glad that we have the police that we do," he said.

Investigators have not said how the yet-to-be-named suspects know each or where they think the possible shooting was going to take place.

Wherever it may have been, Boyd said it’s a problem.

"People tend to react differently than they used to," he said.

Police said at least one of the suspects used to go to Everman.