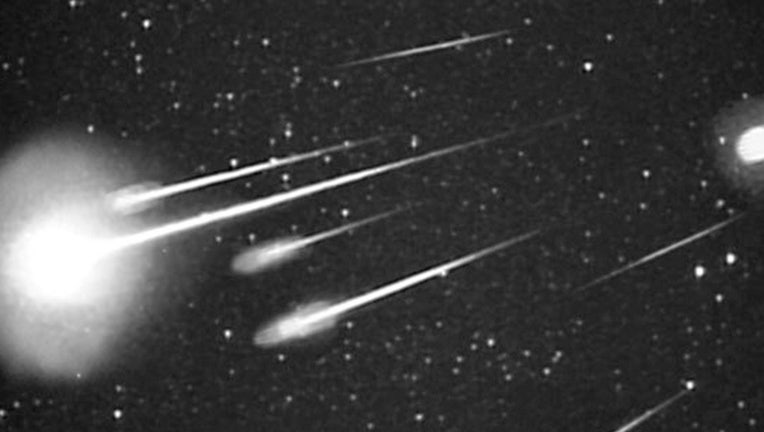 It's that time of year when Starbucks cups turn red, snow is in the forecast and the Leonid meteor shower returns, putting on the brightest sky show of the year.

The Leonids come from the 55P/Tempel-Tuttle comet and happen every November. According to NASA, these meteors move at 44 miles per second and are some of the fastest. During the peak from Thursday night into Friday morning, about 15 meteors per hour could cross the sky.

What are the chances of spotting a meteor? 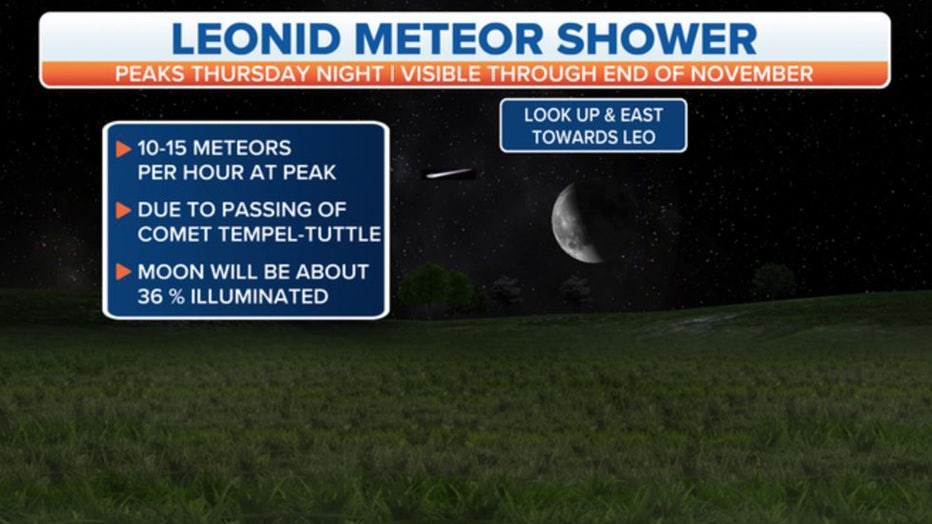 The peak of the Leonids comes with some challenges this year for sky gazers.

The crescent moon will be very bright and create extra light to compete with the meteors, but at least it's not a full moon.

Another snag for sky gazers is that peak meteor activity happens near dawn at 6 a.m. EST. Sunlight will quickly wash out any chance of seeing a shooting star. Don't worry, there is still plenty of time overnight to spot some meteors.

The weather will be an obstacle this year, like most years, during the Leonid meteor shower.

Western and northern New York are bracing for up to 4 feet of lake-effect snow that begins late Thursday. The forecast will undoubtedly present a challenge to anyone near Buffalo hoping to see the Leonids. 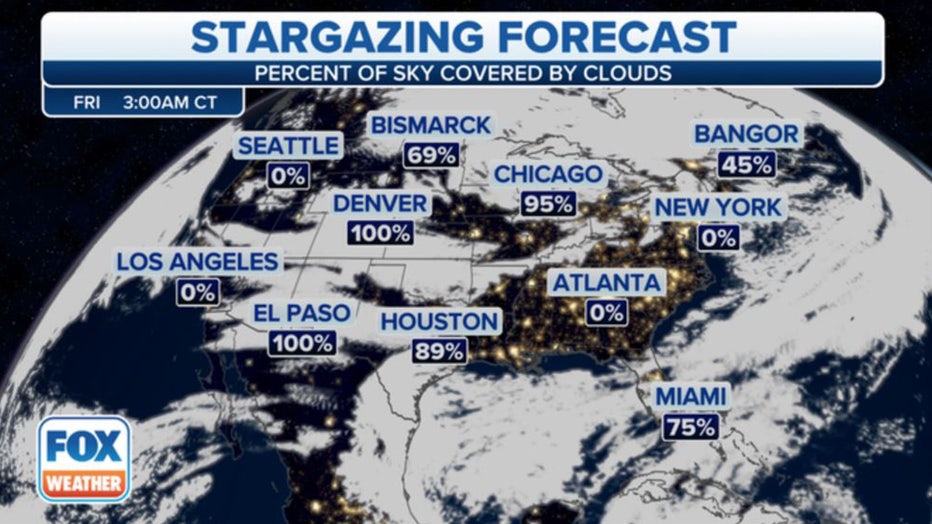 Meanwhile, colder-than-average temperatures have gripped most of the U.S. this week and will continue through the end of the week. It will be bitterly cold, so not ideal for sitting outside patiently waiting to spot a meteor or two.

Parts of the Southeast, including Georgia, Alabama, Mississippi, Louisiana and the Carolinas, will have a good clear sky into Friday morning to look out for shooting stars.

Even parts of the Mid-Atlantic have a good chance of spotting a meteor or two. Still, be sure to bundle up and bring a hot drink with you as temperatures dip into the 30s Friday morning.

There is also some good news for those in the West. A 1,500-mile stretch from Washington to the southern California border is benefiting from a large dome of high pressure that has essentially cleared all the clouds. 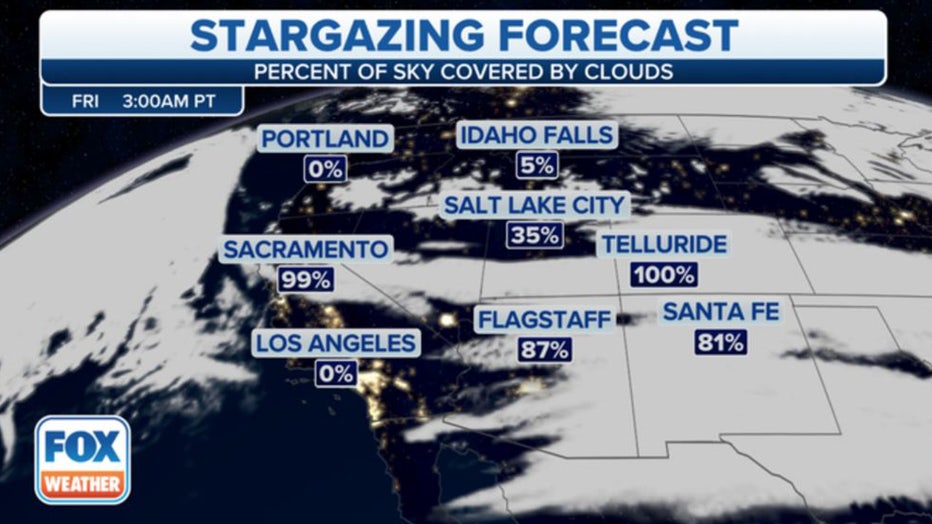 The cloud cover forecast for the West Coast on Friday morning.  (FOX Weather)

This mostly clear sky pattern should hold through Friday, offering clear skies for the meteor shower.

Portland and Los Angeles will have no cloud cover for the meteor shower, but Central California will see the return of clouds by early Friday. 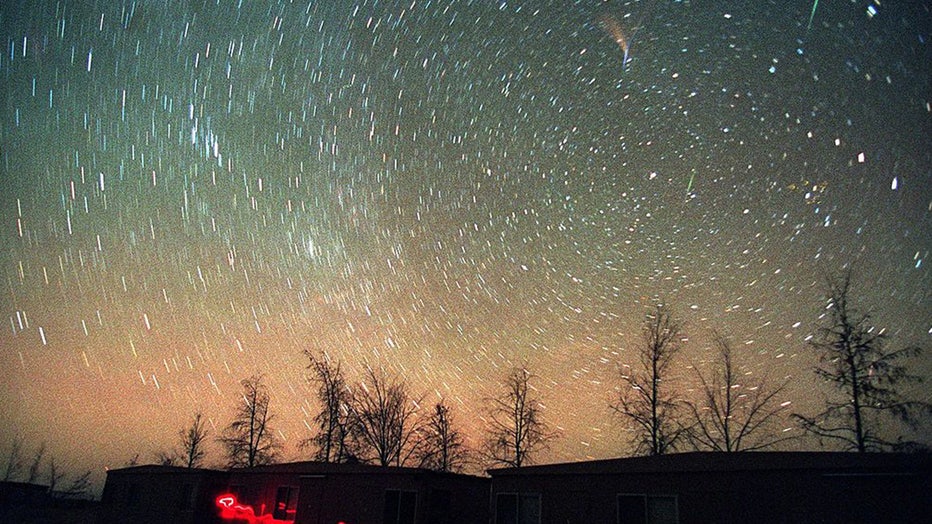 A photo from November 18, 1999, shows a Leonid meteor storm over the Azrak desert, 90km east of Amman. The storm packed up to some 1,500 meteors per hour visible with the eye. (JAMAL NASRALLAH / AFP via Getty Images)

The best way to view any astronomy event is to get away from city lights and find a safe place in the dark. Allow your eyes 30 minutes to adjust to the darkness and avoid using electronics before looking up at the night sky.

If you aren't sure where to watch the meteor shower, the International Dark Sky Association has an interactive map listing dark-sky locations worldwide. The organization founded the International Dark Sky Places Program in 2001 to encourage communities "to preserve and protect dark sites through responsible lighting policies and public education," according to darksky.org.

Based on the forecast for Thursday, there are several registered dark-sky places across the West worth taking the night to camp or visit for the meteor shower. 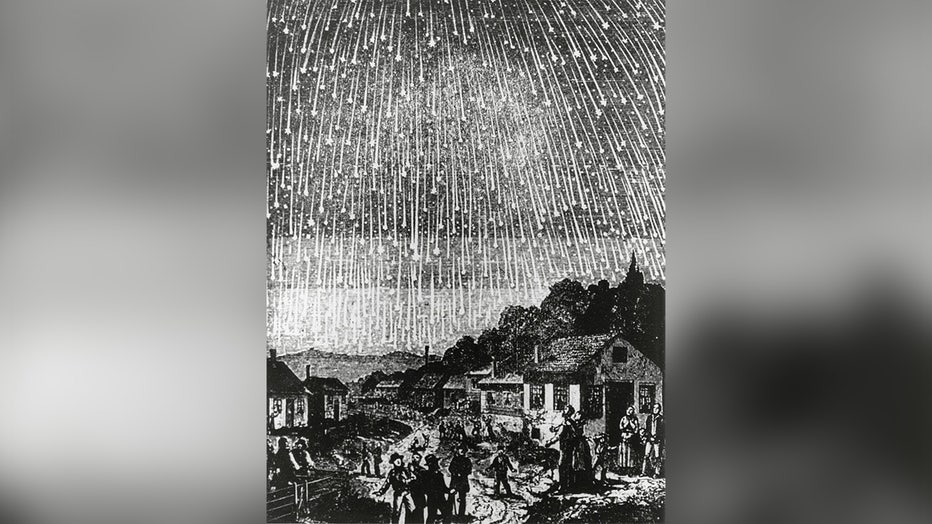 According to NASA, the Leonids produce a meteor storm every 33 years that rains down thousands of meteors worldwide.

A meteor shower usually has dozens of meteors an hour, whereas a storm is at least 1,000 per hour.

It takes comet Tempel-Tuttle 33 years to orbit the sun once, and when it does, pieces of space debris interact with Earth's atmosphere to create the Leonids originating from the comet.

The last Leonid meteor storm happened in 2002, according to NASA. However, the 1999 Leonid meteor shower was highly active, with 1,500 meteors per hour.

Some of the most notable Leonid meteor storms happened in the 1800s. Illustrations from a storm in 1833 show so many meteors it looked like the sky was raining stars.

According to NASA, a similar event happened in 1966, when "thousands of meteors per minute fell through Earth's atmosphere during a 15-minute period."