Texas to receive 800,000 COVID-19 vaccine doses next week, which is a drop from this week

More people will be eligible for vaccines in Texas next week. But there will be fewer vaccines available.

About 800,000 new doses of the COVID-19 vaccine will be coming into Texas next week. That's a drop from the million-plus the state got this week.

That's because the FEMA hubs won't be doing first doses starting next week, and the initial supply of Johnson & Johnson vaccine has been used up.

The state said most of those available doses have been distributed by the federal government, and now second doses are being prioritized.

"The federally supported sites in Arlington, Dallas, and Houston have finished their three-week cycle of first doses and will begin administering second doses for the next three weeks," Garcia explained.

Dallas County Judge Clay Jenkins said, according to data from DSHS, Dallas and Tarrant counties have been allocated 176,000 less vaccines than they anticipated, based on population, over the last three weeks.

DSHS said they’re trying to make the vaccine equitable across all counties, and noted the federal government is distributing vaccines based on outdated population data, a problem they’re actively working to fix.

"We think that a million adults are not getting counted towards Texas, so ultimately, that does reduce the amount of vaccine coming to the state," Garcia said.

On Monday, when the list is expanded to include group 1C, which includes Texans between the age of 50-64, that will add four million people who are eligible and have not been vaccinated.

About 800,000 new doses of the COVID-19 vaccine will be coming into Texas next week. That's a drop from the million-plus the state got this week.

RELATED: Texans over the age of 50 eligible for COVID-19 vaccine starting March 15

The state health department discussed its decision to expand group 1C to Texans over the age of 50, while leaving out essential workers.

"This group bares significant risk of severe disease, hospitalization, and death," Garcia said. "20% of the deaths in Texas throughout the pandemic have occurred in people ages 50-64, and when you add people 60 and older, the combined group accounts for 93% of all COVID-related deaths."

A CDC advisory panel recommended including essential workers in one-c, people like grocery store employees, and those in manufacturing and agriculture.

But the Department of State Health and Human Services did not include them, at a time when the state no longer mandates face coverings.

"Any frontline workers who has a co-morbidity issue qualifies right now," Garcia explained. "We do know the vaccine supply will be increasing in the coming months, so we just need you to hang on for just a little while longer."

Prior to Wednesday’s announcement, many believed or hoped essential food workers would be included in 1C, only to be left out again.

"We were obviously the forgotten group. Extremely disappointed and angry about the fact that we keep being overlooked and overlooked," said Johnny Rodriguez, who is president of the United Food and Commercial Workers Union for Local 540.

The United Food and Commercial Workers Union has been speaking with leaders on the county and state level to try and get their group prioritized for the vaccine.

"But let’s face it, this argument has been going on for way too long. We were declared essential workers way back in April of last year, because they supposedly recognize that food workers are very important to the process of maintaining the food chain supply," Rodriguez added. 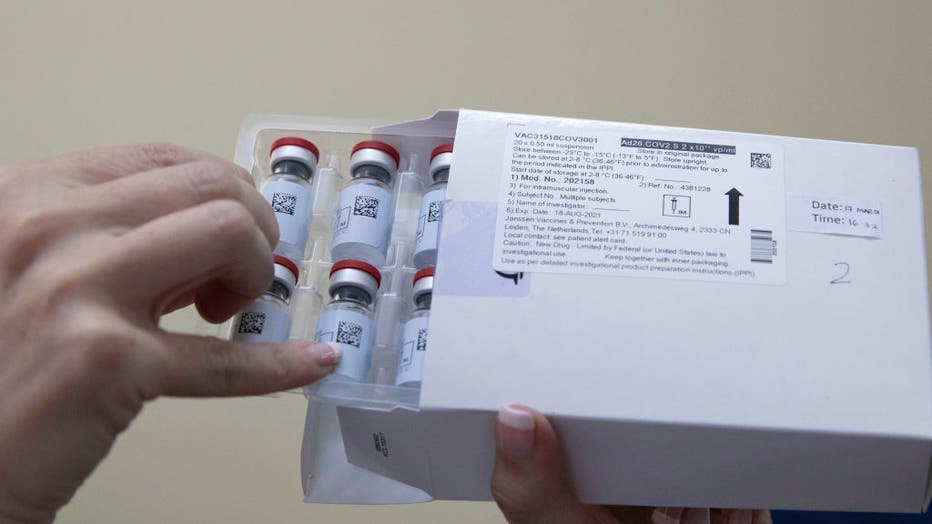 A healthcare worker holds vials containing doses of the Johnson & Johnson vaccine against the COVID-19 coronavirus as South Africa proceeds with its inoculation campaign at the Klerksdorp Hospital on February 18, 2021. (Photo by Phill Magakoe / A

On Thursday, CVS announced it is adding 74 pharmacies to the 106 in Texas that are able to administer COVID-19 vaccines to eligible Texans.

"That's exciting to see us evolve into that," Fratamico said. "People may ask what about substitute teachers yes they are eligible as well."

Specific locations will be available on their website Saturday, once the allotment is received.

"I'm really excited for that. I know that Texans have been waiting for more players into this role and we're playing a big part in expanding that for the community," Fratamico said.

In a statement to FOX 4 News, Walgreens said Texas is a new jurisdiction as part of the Federal Retail Pharmacy Program.

The state health department said 200,000 doses are being sent directly to Texas pharmacies from the federal government.

"They have told the retail pharmacies to prioritize them through month of March," Garcia explained.

The state health department said it's partnering with the Texas Education Agency in order to help school districts who may not already have a vaccine provider.

But educators can also get a vaccine wherever it’s offered.