Texas Gov. Greg Abbott on Friday repealed his traffic-clogging immigration order that backed up commercial trucks at the U.S.-Mexico border, after a week of intensifying backlash and fears of deepening economic losses.

AUSTIN, Texas (AP) - Texas Gov. Greg Abbott on Friday repealed his traffic-clogging immigration order that backed up commercial trucks at the U.S.-Mexico border, after a week of intensifying backlash and fears of deepening economic losses.

The Republican governor dropped his new rules that had required all commercial trucks from Mexico to undergo extra inspections to curb the flow of migrants and drugs and ratcheted up a fight with the Biden administration over immigration policy.

Some truckers reported waiting more than 30 hours to cross. Others blocked one of the world’s busiest trade bridges in protest. 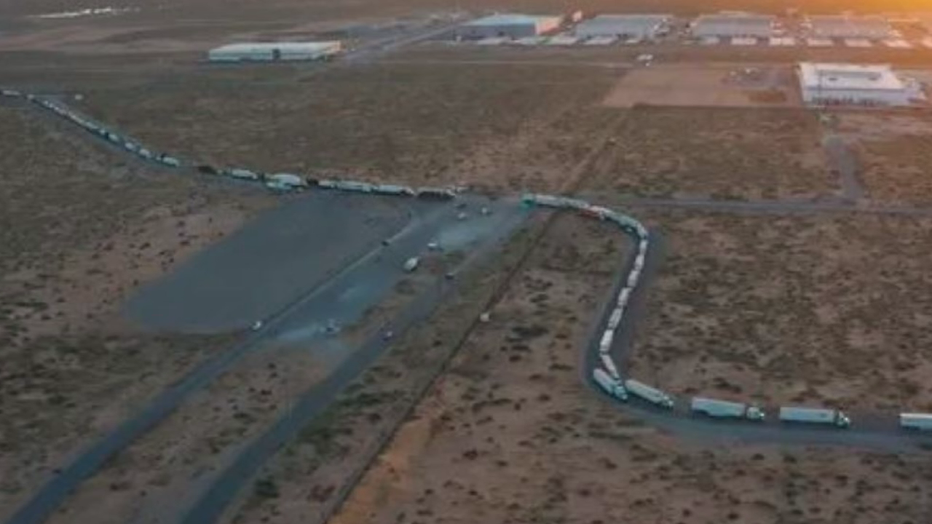 Abbott, who is up for reelection in November and has made the border his top issue, fully lifted the inspections after reaching agreements with neighboring Mexican states that he says outline new commitments to border security. The last one was signed with the governor of Tamaulipas, who earlier this week said the inspections were overzealous and created havoc. On Friday, he joined Abbott and said they were ready to work together.

When Abbott first ordered the inspections, he did not say lifting them was conditional on such arrangements with Mexico.

Pressure was building on Abbott to retreat as gridlock on the border worsened. The American Trucking Association called the inspections "wholly flawed, redundant and adding considerable weight on an already strained supply chain." One customs agency in Mexico estimated the losses at millions of dollars a day, and produce distributors warned of empty shelves and higher prices if the order was not rescinded soon.

Abbot acknowledged the trade slowdowns but showed no sign of regret. He said he was prepared to reimpose the inspections if Mexican states don’t hold up their end of the deal.

"I’m not hesitant to do so whatsoever," Abbott said.

The U.S.-Mexico border is crucial to the U.S. economy and more of it is in Texas — roughly 1,200 miles — than any other state. The United States last year imported $390.7 billion worth of goods from Mexico, second only to China.

Trucks are inspected by U.S. Customs and Border Protection agents upon entering the country. Texas began its own inspections after the Biden administration said pandemic-related restrictions on claiming asylum at the border would be lifted May 23.

Abbott called the inspections a "zero tolerance policy for unsafe vehicles" smuggling migrants. He said Texas would take several steps in response to the end of the asylum restrictions, which is expected to lead to an increase in migrants coming to the border.

State troopers inspected more than 6,000 commercial vehicles over the past week, according to the Texas Department of Public Safety. Nearly 1 in 4 trucks were pulled off the road for what the agency described as serious violations that included defective tires and brakes.

Troopers did not turn up any human or drug trafficking during the inspections, said Department of Public Safety Director Steve McCraw. He described it as unsurprising, saying cartels knew the inspections were taking place.

But migrants are stopped at ports of entry in only about 5% of CBP encounters. The vast majority cross in mountains, deserts and cities between official crossings.

The dynamic with drug seizures is different, with fentanyl, heroin, methamphetamine and other hard narcotics being seized overwhelmingly at official crossings instead of between them. Their compact size and lack of odor make them extremely difficult to detect.

Abbott has also chartered buses to Washington, D.C., for migrants who wanted to go. The first drop-offs happened Wednesday, drawing criticism from the Biden administration. On Thursday, CBP Commissioner Chris Magnus said Texas was moving migrants without "adequately coordinating" with the federal government.