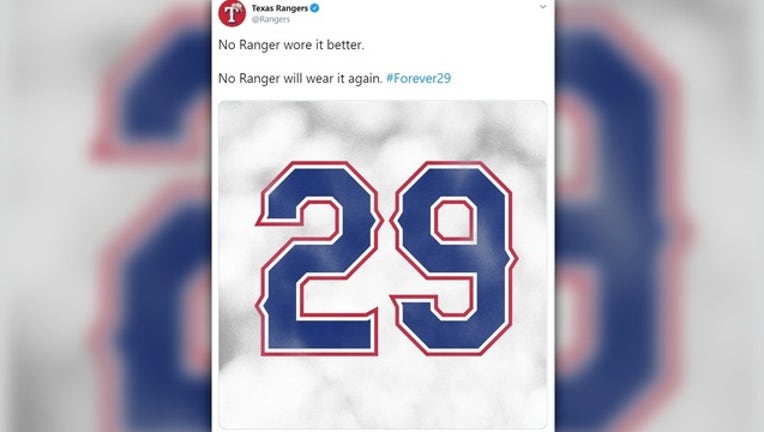 The Rangers tweeted Friday night "No Ranger wore it better. No Ranger will wear it again. #Forever29."

The team will have a ceremony in June to officially retire the number.

“The Rangers are proud and honored to make this announcement tonight,” said team Co-Chairman and Managing Partner Ray Davis. “This franchise and its fans have the privilege of witnessing the last eight years of Adrian Beltre’s Hall of Fame career on a daily basis. With 2019 being our final year at Globe Life Park in Arlington, we felt it was appropriate to retire Adrian’s number in the park where he excelled for so long.”

Beltre will be the fourth Ranger to have his number retired. He’ll join Nolan Ryan, Johnny Oates. and Ivan Rodriguez.

Beltre announced his retirement from baseball in November.

In his eight seasons with the Rangers, Beltre batted .304 with 199 homers and 699 RBI in 1098 games. He was a four-time selection as the Rangers’ Player of the Year while batting at least .300 five times. His .332 average as a Ranger at Globe Life Park is the highest in the 25-year history of the park, and he ranks second with 120 homers and 426 RBI.