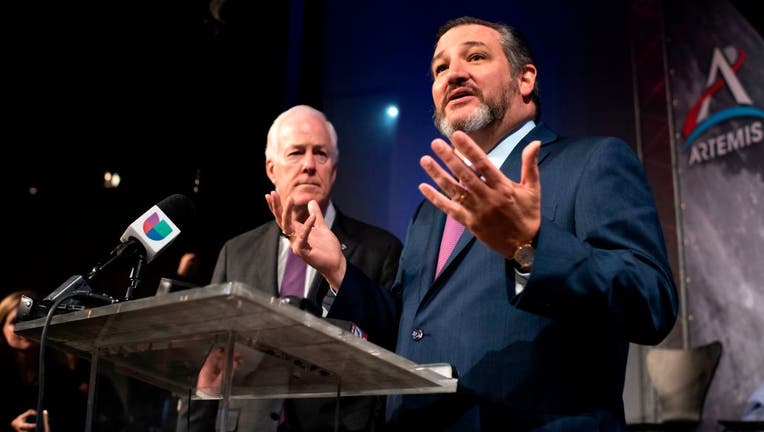 US Senators Ted Cruz (R) and John Cornyn take part in the astronaut graduation ceremony at Johnson Space Center in Houston Texas, on January 10, 2020. - The 13 astronauts, 11 from NASA and 2 from CSA, are the first candidates to graduate under the Ar

WASHINGTON - U.S. Sens. Ted Cruz and John Cornyn both voted against federal protection for gay and interracial marriage Tuesday, though the full Senate passed the bill with bipartisan support.

The Respect for Marriage Act would require states to recognize all legally performed marriages and would repeal the Defense of Marriage Act, which defined marriages for the purpose of federal benefits as between a man and a woman. It passed the upper chamber on a 61-36 vote, with 12 Republicans joining all Democrats in support.

The bill is largely a safeguard against potential action by the Supreme Court to overturn Obergefell v. Hodges, which made the Defense of Marriage Act unenforceable and enshrined the right to same-sex marriages across the country. But the bill does not go as far as codifying the landmark Supreme Court decision, which mandated states to perform same-sex marriages.

The U.S. House passed its own version of the Respect for Marriage Act back in July, with all Texas Democrats and Rep. Tony Gonzales, R-San Antonio, voting for the bill. The House needs to vote again on the bill to approve the Senate’s amendments before it goes to President Joe Biden’s desk, which could be as soon as this week.

Cruz and Cornyn objected to the bill, asserting that it infringed on religious liberty by opening a pathway to lawsuits against religious institutions that oppose same-sex marriage. But progressive activists said the bill did not go far enough and had considerable concessions for religious groups in order to secure Republican support.

The bill does not require religious organizations to perform same-sex marriages, and religious groups’ tax status will not be impacted by what kinds of marriages they do or don’t officiate. The Church of Jesus Christ of Latter-day Saints, one of the most fervent opponents of same-sex marriage legislation in the past, backed the Respect for Marriage Act, citing its protections for religious freedom.

Cruz also rejected the idea that same-sex and interracial marriage was under threat in the first place. Following the Supreme Court’s reversal of Roe v. Wade over the summer, LGBTQ rights groups and Democrats pushed for federal legislation in case the high court overturns Obergefell v. Hodges. Conservative Supreme Court Justice Clarence Thomas wrote in an opinion in the abortion case that appeared to open a challenge to the Obergefell decision.

Tuesday’s vote was largely procedural as the upper chamber secured enough supportive Republicans for the bill just before the Thanksgiving recess. During a technical vote that essentially sealed the bill’s fate earlier this month, 12 Republicans joined all Democrats in supporting the bill. That vote required at least 60 votes — all 50 Democrats and 10 Republicans — for the bill to advance. Cruz and Cornyn voted to freeze the legislation at the time.