The Army National Guard was on-hand Friday to help distribute the food to hundreds of North Texans. Many of the food recipients have been out of work for weeks.

FORT WORTH, Texas - Cars lined up hours before the start of another Tarrant Area Food Bank distribution event on Friday.

The Mega Mobile Market was hosted by TAFB at Herman Clark Stadium in Fort Worth.

The Army National Guard was on-hand to help distribute the food to hundreds of North Texans. Many of the food recipients have been out of work for weeks.

The Tarrant Area Food Bank CEO says they handed out groceries to some 3,000 people on Friday. She expects that number to grow as more and more people are losing their jobs.

Images from SKY4 Friday show a growing community in need of help.

The TAFB handed out groceries to thousands of people for many who lost their jobs due to the pandemic. 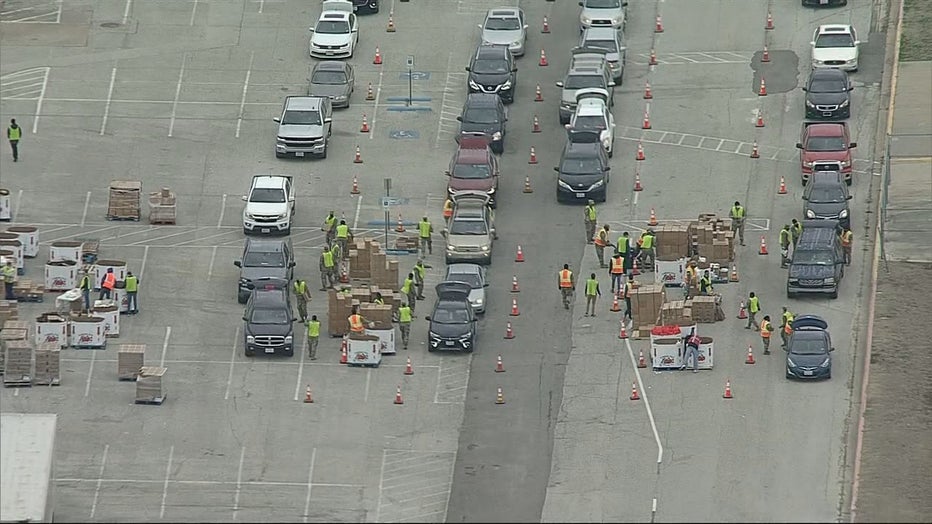 TAFB CEO Julie Butner says the organization held 15 food banks per week. Now, they're up to 40.

"The unemployment rate is going up," Butner said. "So we're anticipating having to be able to continue to need to provide this type of service to the community until we can get the economy back."

According to the latest jobs report, employers cut 140,000 more jobs last month than they added as the worsening pandemic led more businesses to shut down. It was the first month of job losses for the economy since April.

SMU Economist Mike Davis says the economic rebound will largely depend on how quickly folks can get vaccinated. It’s a daunting task for local municipalities begging states for more doses.

"There's a real concern that what was looking like an okay recovery from a really bad recession is now kind of flat-lined a little bit," Davis said. "And that is certainly consistent by the way with the news we’re getting on the pandemic."

In the meantime, non-profits like the TAFB will do what they can to keep North Texas afloat. Folks are grateful for the help.

This latest jobs report was much a worse reading than the modest growth that economists were expecting to see.

Davis cautions against putting too much weight into a once-a-month snapshot, but he is worried the trend could continue.