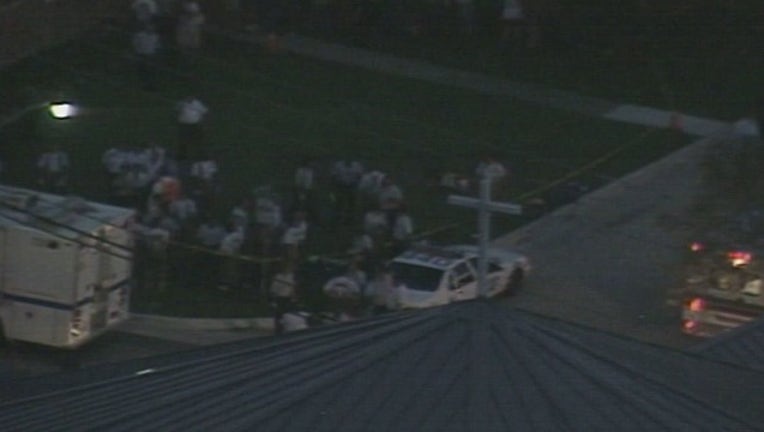 FORT WORTH, Texas - After the recent mass shootings in El Paso and Midland-Odessa, a Fort Worth church prepares to mark twenty years since its own tragedy.

On Sept. 15, 1999, a man walked into Fort Worth's Wedgwood Baptist Church and opened fire. He killed seven people then turned the gun on himself.

This Sunday marks 20 years since the shooting inside of that Wedgwood sanctuary. Survivors say they often relive that day every time they hear of another mass shooting in the U.S.

The former pastor of the church described the scene a beehive swarming with first responders, helicopters, flashing lights and terrified parents and a night that changed hundreds of lives forever.

Lodged inside of a hymnal is a bullet that serves a cold reminder that takes Chip Gillette back to that night in 1999.

"And the gunfire was still going on," he recalled. "Shell casings everywhere. The strong smell of gunpowder everywhere."

Chip was the first Fort Worth police officer to arrive at Wedgwood Baptist Church that night. Hundreds of teenagers were hiding under the pews while a gunman stood in the aisle firing a semi-automatic weapon across the sanctuary.

Seven people had been shot and killed. Several others were wounded and rushed to the hospital. About 500 teenagers scrambled to find their parents and tried to process the tragedy that had just unfolded.

Officer Gillette's daughter, Rebekah, was inside of the sanctuary that night in the front row for a youth worship and praise concert.

"It wasn't right away that I realized ‘This is really happening,'" she recalled. "I mean I was 15 years old."

Rebekah's mother, Debbie Gillette, was the church administrator and was in her office just down the hallway when she heard the gunshots.

"I remember just praying, ‘Lord, I hope that you protected Rebekah. That she's safe,'" Debbie recalled.

Al Meredith was the lead pastor at the time.

"I remember turning around and looking at the back door," Rebekah said. "And it was just like a domino effect of people diving down to hide."

Rebekah remembers seeing blood trickling on the tile underneath the pews.

Meredith recalls a brave young man named Jeremiah Neitz who stood up to confront the shooter.

"And this young man said ‘Go ahead and shoot me. But if I die, I know where I'm going. Do you know where you're going?'" the pastor recalled.

The gunman took a step back and shot himself. Police say he had no connection to the church.

"We, to this day, don't know why he was led to this church," Meredith said.

Now 20 years later, the congregation is looking back to remember those who were lost.

A flag pole now stands as a memorial with a picture of each of the victims with their name and favorite scripture: Kristi Beckel, Shawn Brown, Justin Ray, Sydney Browning, Joey Ennis, Kim Jones and Cassie Griffin.

One of the wounded that day was a young man named Justin Laird who was celebrating his 16th birthday. A bullet struck his spine, and he was paralyzed from the chest down.

Years later, Rebekah Gillette wrote to Justin's mother words of comfort while reflecting on the shooting. She and Justin started messaging each other on Facebook.

The couple married on August 9, 2008. And after five rounds of IVF treatment, Rebekah gave birth to their miracle baby, now-3-year-old Hunter Moon.

"And it's something we remember every year on his birthday. But I also get to celebrate his life," Rebekah said. "That he's still here. That we met. And we have a beautiful family. And a wonderful baby boy."

Since Wedgwood, there have been dozens of mass shootings in the U.S., including one at another Baptist church in Sutherland Springs, Texas, where 26 died.

After the Sutherland shooting a year and a half ago, in my spirit I heard the Lord saying ‘It's time to write a book,'" Meredith said.

The book is called Surviving Catastrophe. It's full of tips on how to process and move forward after a mass shooting.

Twenty years after Wedgwood, the healing process is ongoing.

"It's a daily walk," Rebekah said.

"Knowing Christ is my savior, he's my hope," Debbie said.

On Sunday morning, the church is hosting a special service to remember how faith pulled them through.

Families of the victims are expected to speak, and the church will display two decades of emails and letters from people around the world sending their love and support to the congregation.