A woman recording a yoga session in a DeSoto park said she was confronted by a man who exposed himself. Then, she turned to social media to expose him.

DESOTO, Texas - A woman recording a yoga session in a DeSoto park said she was confronted by a man who exposed himself.

Then, she turned to social media to expose him.

It happened Sunday, at about 7 p.m., at Zeiger Park in Desoto. Within hours, social media had given Gabrielle Dawn everything she needed to give police.

“As I was flowing, he walked past and I just thought, ‘Okay whatever,’” Dawn recalled.

She was talking about a man in lime green shorts who interrupted her flow.

“Then he turned around and said, ‘Can you help me with something?’ And he was kind of limping. I was like, ‘What?’ And that’s whenever he exposed himself to me at eye level as he continued to approach me,” Dawn said.

She, smartly, stood up, showing no fear, and told him to get away from her. He then took off. 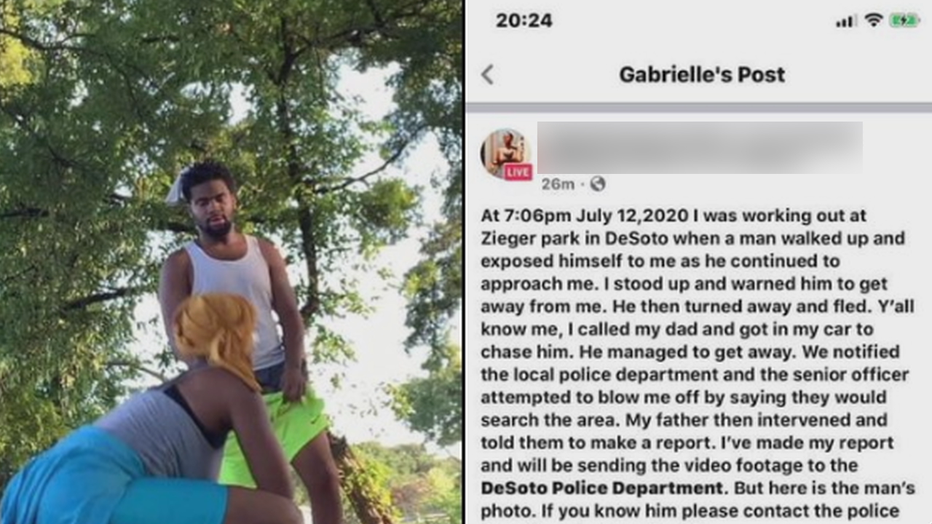 “I wanted this man. I wanted his information so I could provide that to the police department,” Dawn said.

And she said she got a huge response from her community.

“I’m so thankful for everybody that shared the story,” she said.

“She got some calls on a possible name of a suspect, and we got some calls, and we ended up identifying him within a short period of time,” DeSoto Police Chief Joe Costa said.

About 90 minutes after the incident, police said they knew the man in the lime green shorts was 19 years old, and they knew his name.

“We don’t want to release his name just of yet, but we do have an arrest warrant issued for him. We positively identified him, made contact with his family, and we're trying to get him to turn himself in now,” Costa said. “Social media is a valuable tool and unbelievable resource for us when we're looking at cases where we don’t have an identification on someone.”

Dawn's posts went viral, and she's grateful for everybody who put a name to the man in the lime green shorts.

Chief Costa said he doesn’t believe this man is a repeat offender, and added that there haven’t been other incidents reported recently.

He said the man was watching Dawn and called it an opportunity for him to act bad.

Dawn said this was the one time she didn’t have some kind of protection with her, adding that won’t happen again.