Drivers stranded on I-20 in after West Texas snowstorm

The same winter storm that brought snow to North Texas caused much bigger problems on Interstate 20 in West Texas.

While just a few inches of snow blanketed parts of North Texas on New Year’s Eve, heavier snowfall in west and central Texas also brought traffic to a halt along Interstate 20.

The Texas Department of Transportation said I-20 was never shut down between Abilene and Midland. But traffic came to a 13-hour standstill because several 18-wheelers stopped until ice and snow could be cleared.

RELATED: Snow falls on New Year's Eve in areas west of Fort Worth

Tammy Bautista and hundreds of others were stranded on I-20 east of Big Spring, Texas from about 8:30 p.m. Thursday until 10:30 a.m. Friday.

Bautista and her 13-year-old son who is autistic were on their way to Midland to visit family members. She said it was a lack of information that added to the frustration.

"And the eastbound land is functional. So I’m not understanding why DPS or TxDOT hasn’t been out here," she said.

There were no major crashes to clear. Instead, a spokeswoman for TxDOT said 18-wheelers were stopped on the interstate because the icy conditions were too dangerous. 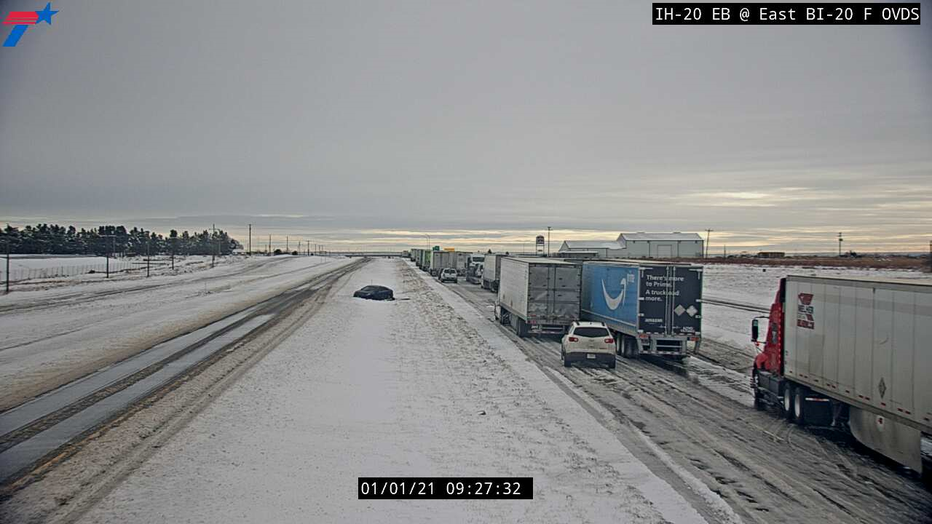 The roads had been pre-treated but then needed to be cleared after the storm, the spokeswoman said.

"One driver that came out and passed a big old box of crackers out to people, offered them water, you know. He had limited supply so you know just the more needy people that are older, I told him go ahead and help them out," Bautista said.

Victoria Zamarripa and her husband were fortunate to exit and make it to a gas station before traffic came to a stop.

"When we got to Big Spring it started to have a blizzard snow storm," he said.

"We got our son and he’s 4 months old. We didn’t want to stay in the cold car and we only had like half a tank of gas," she said.

Larry Martin was driving from Lubbuck to Dallas for the U.S. Post Office when the storm hit.

"You got the cars lined up in one lane because you know on a two lane highway only one lane was drivable," he said.

He said TxDOT would clear the roads but it didn’t help for long.

"They would try to clear things off but it would just freeze back up as soon as they would get through," he said.

For some the ordeal served as a New Year’s resolution.

"Make sure you check the weather," Zamarripa said.

"I will never forget this New Year’s in my life ever," Bautista said.

TxDOT does have a website and hotline for people to check road conditions. Visit drivetexas.org or call 800-452-9292.