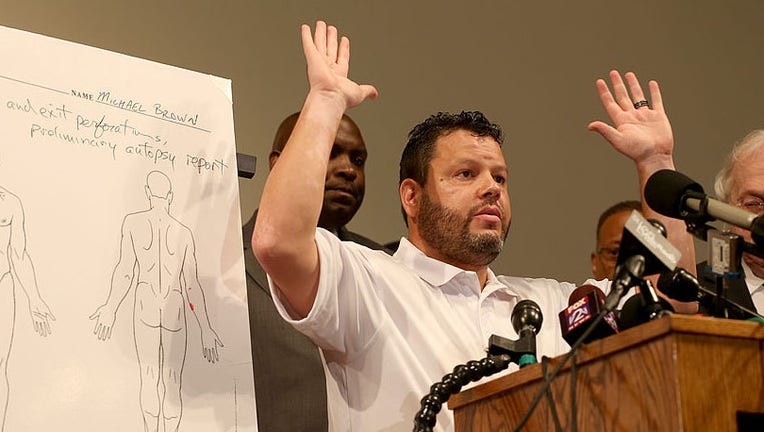 FILE - Shawn Parcells speaks during a news conference on Aug. 18, 2014, in St. Louis, Missouri, over a week after Michael Brown was shot and killed by a police officer in Ferguson. (Photo by Joe Raedle/Getty Images)

TOPEKA, Kan. - A Kansas man has been sentenced to nearly six years in prison for wire fraud after he admitted to running an illegal autopsy scheme.

Shawn Parcells, 42, who lived in Topeka, was sentenced on Monday in federal court to one count of wire fraud, the U.S. Attorney’s office said in a statement.

Between 2016 and 2019, Parcells made more than $1.1 million in Kansas from more than 350 clients of his business for autopsies, most of which he did not perform, according to court records.

As the owner of National Autopsy Services, LCC, Parcells convinced a client in 2016 to pay $5,000 for an autopsy, according to the DOJ. The client received an emailed autopsy report that appeared to be authored by Parcells. But no pathologist was involved in the examination or report, which is illegal.

Parcells pleaded guilty in May. As part of the plea deal, nine other fraud counts were dropped.

The following is a breakdown of crimes per 100,000 people in the U.S., provided by the FBI:

Parcells first gained national attention in 2014 when he assisted a privately hired pathologist in an autopsy of Michael Brown, the unarmed Black 18-year-old from Ferguson, Missouri, who was fatally shot by a White police officer.

The autopsy was commissioned by Brown’s family and no allegations of wrongdoing were raised in relation to it. But Parcells’ frequent media appearances led to scrutiny, including a CNN story revealing he had no specific certification or training.

In August, Parcells was banned from doing business in Kansas and ordered to pay more than $700,000 in restitution and fines for the state cases. He was also ordered to pay over $250,000 in restitution to 82 people that used his services. That came after he was convicted in November of three felonies and three misdemeanors related to providing illegal autopsies in Wabaunsee County.

Prosecutors discovered that Parcells collected more than 1,600 biological samples, mostly human tissue, as part of the scheme. The Kansas Department of Health and Environment took custody of the samples and victims have until Oct. 6 to claim them.

"It’s troubling whenever criminals deceptively present themselves as professionals to commit fraud on unwitting victims, but the fact that Parcells’ schemes were predicated upon exploiting the grief and bereavement of others, makes his act a particularly predatory crime," U.S. Attorney Duston Slinkard said in a statement.