DALLAS - The severe weather threat forecasted for Friday has left many with flashbacks of what could happen, like the damage from October's storms that brought tornadoes.

Several North Texas private schools decided to not take any chances when it comes to the safety of students and staff, so they decided to call it quits early.

Many schools, like White Rock Montessori and St, Thomas Aquinas in Dallas, made the decision mid-morning to end the school day hours ahead of schedule.

Parents received a text message or call, letting them know that their kids would be released early.

Cars began lining up around the schools shortly after. 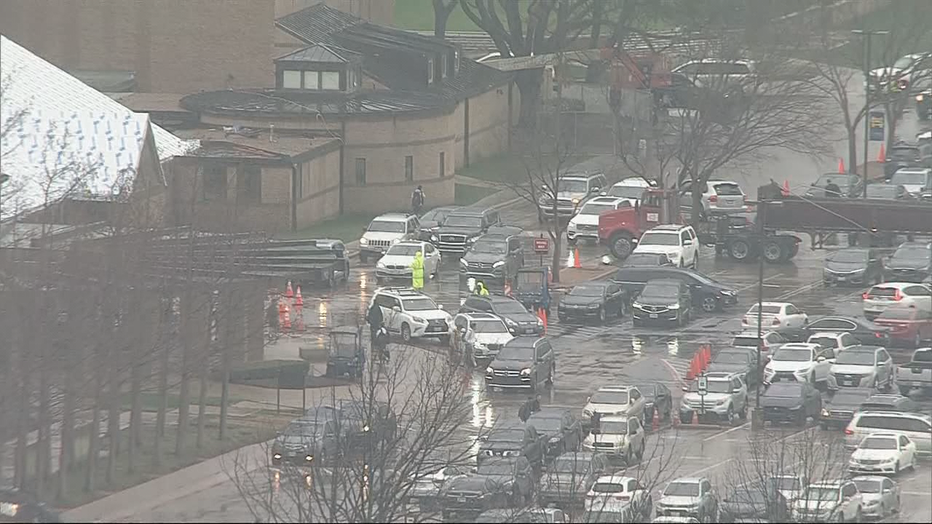 Some parents were able to make it in time. Others sent trusted family members in their place.

“My daughter got a text message alert and she called me and just finished my workout, headed home, showered and came over,” said Bill Persinger, who picked up his grandchild.

“They said we were going to go home early because of the severe thunderstorms and because there was going to be traffic later,” student Kayci Tafalla said.

SKY4 was overhead as students at St. Mark's School in North Dallas left the campus for the day.

Administrators made the decision to end class at 12:30 p.m. due to the threat of severe weather.

St. Marks was among the schools damaged by last year's tornado.

Most parents said they were glad their schools took proactive measures.

Only a few school districts did not cancel after school events Friday afternoon and evening.

Grapevine-Colleyville ISD was among them.

Heavy rains rolled in outside Grapevine High School as people came to watch a full-slate of basketball games, but during the girls’ JV game, a tornado warning was issued.

Only a few school districts did not cancel after school events Friday afternoon.

Both visiting Azle High School and Grapevine’s home team, along with fans, were led to a different area of the school to take shelter.

“My phone’s alarm started to go off with the tornado warning so it was like, ‘OK, I guess I’m going to have to run into the school,’ because I thought I was just going to have to pick up a son,’” parent Vilma Holguin said.

Holguin was waiting outside for her child. Instead, she ended up hunkering down with dozens of parents and kids.

“I’ve got to let my family know where I’m at, where my kids are at, because we’re all separated. My husband’s plane got diverted to Oklahoma City,” one parent said.

A majority of North Texas school districts cancelled after school activities out of precaution due to potential severe weather.

That included Dallas, Fort Worth, and Arlington ISDs.

They felt they could keep everyone safe in a troubling situation, and they opted to start the games early.

Though everyone had to hunker down during the Tornado Warning, eventually the warning was lifted, and the games picked back up after about a 30-minute delay.

“Better to be safe. You can always replay a game,” coach Bert Trevino, said.