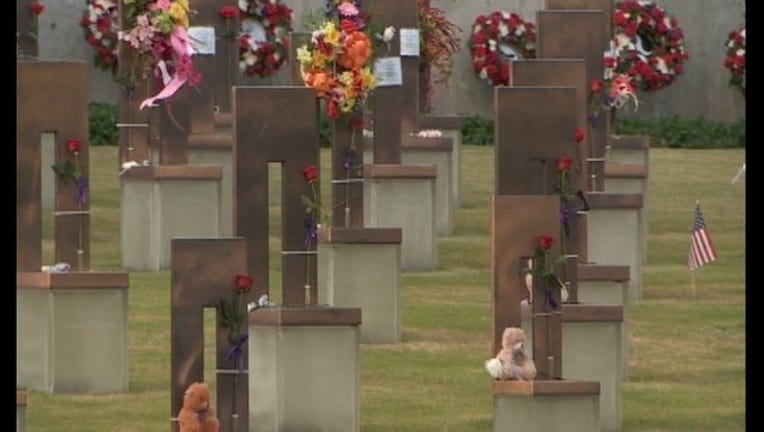 About 1,000 people gathered Sunday to commemorate the 20th anniversary of the Oklahoma City bombing, which was the deadliest terrorist attack on U.S. soil until the Sept. 11 attacks six years later.

Former President Bill Clinton and Oklahoma Gov. Mary Fallin were among those who spoke at Sunday's service at the Oklahoma City National Memorial & Museum, where the Alfred P. Murrah Federal Building once stood.

The service started with a 168-second moment of silence to honor each of the 168 people who died in the April 19, 1995, attack. It concluded about 90 minutes later with survivors and tearful relatives of the dead reading the names of those killed.

"This was a place of unspeakable horror and tragedy," said Frank Keating, who completed his first 100 days as Oklahoma's governor the day before the attack. "How some evil individual would do what he did ... is unforgiveable and absolutely unimaginable."

"The agony was consistent. The agony appeared never to end," Keating said.

FBI Director James Comey and others paid tribute to those who took part in the recovery efforts.

"In an instant, this day was transformed into a moment of history, a moment of unspeakable horror and darkness," Comey said. "It is not the moment that defines us. It is not the act itself that shapes our destiny. It is what comes next."

After the service, LaDonna Battle and her family were standing between two of the 168 metal and glass chairs that now stand as a testament to those who were killed. The two chairs were inscribed with the names of her parents, Calvin and Peola Battle, who were arranging to receive Social Security benefits when the bomb detonated.

Timothy McVeigh, an Army veteran with strong anti-government views, planned the bombing as revenge for the deadly standoff between the FBI and Branch Davidians in Waco, Texas, that killed more than 70 people on April 19, 1993 -- exactly two years earlier.

McVeigh was convicted on federal murder and conspiracy charges in 1997 and executed in 2001.

His Army buddy, Terry Nichols, was convicted on federal and state bombing-related charges and is serving multiple life sentences in a federal prison.