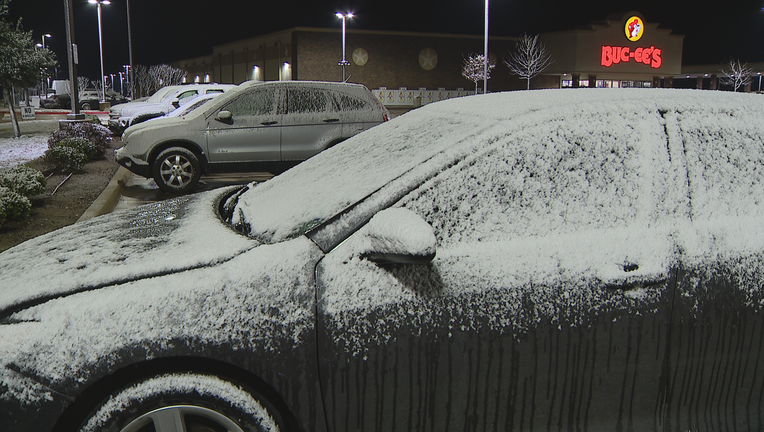 In Ellis, Henderson, Hunt and Rains counties, many residents went outside early Thursday to capture the moment snowflakes started falling. They shared video with FOX 4.

Residents in Rockwall and Kaufman counties woke up to cars covered in a blanket of white with a little bit on the ground. It was enough to get people excited.

“This morning when I woke up and walked outside and I saw all the ice all over the cars I thought, ‘Oh it snowed!’ Then when I went up to the window it was icy so I had to hurry up and get it off my windshield. But it’s beautiful. I love it. I love it when it snows like that,” said Peggy Hansen, who lives in Crandall.

Some people got snow overnight as a winter weather storm system moved out of North Texas. FOX 4's Ashley Paredez talked to residents in Terrell.

In Navarro County, the office of emergency management has been checking roadways overnight and keeping in touch with local school districts. Some decided to close again on Thursday.

The roads are still wet and icy in some spots, especially on bridges and overpasses. Drivers are encouraged to use caution.

Denton County was one of the counties under a winter weather advisory on Wednesday. It was cold and rainy there most of the day and then a light dusting of snow fell just as people got home from work.

Winter weather caused a number of problems on area roads Wednesday afternoon. And with temperatures even colder overnight, road crews were busy.

The snow piled up a bit in the grass but for the most part, it wasn’t enough to stick to the roads. A few icy spots did cause accidents on the roads overnight, though.

Two cars crashed after hitting a patch of ice on FM 1515 near Interstate 35E and 35W split. Thankfully no one was hurt and first responders called in road crews to spread sand on the ramps and bridges in the area.

Drivers on Thursday morning said they were being cautious even though they weren’t having any problems on the roads.

“So far so good. I haven’t had any issues, not even in my neighborhood. That’s where I was worried with the sprinkler systems being on and such,” said Martin Garcia, a driver in Denton.

Garcia planned to go slow and steady just in case.

“It’s gonna warm up by 10 a.m. Just certain areas like here in the entrances, it might be a little bit wet so be careful,” he said.