After only seeing rain Wednesday morning, parts of Tarrant and Denton counties saw a mix of sleet and snow during rush hour&nbsp;Wednesday evening.

DALLAS - After only seeing rain Wednesday morning, parts of Tarrant and Denton counties saw a mix of sleet and snow during rush hour Wednesday evening.

The second line of winter weather developed about 4 p.m. and moved in from the west, with flurries falling in cities like Fort Worth and Denton.

There wasn't enough for it to stick to the roads, but with temperatures dropping below freezing into the overnight hours, some people said they're keeping it careful on the roads. 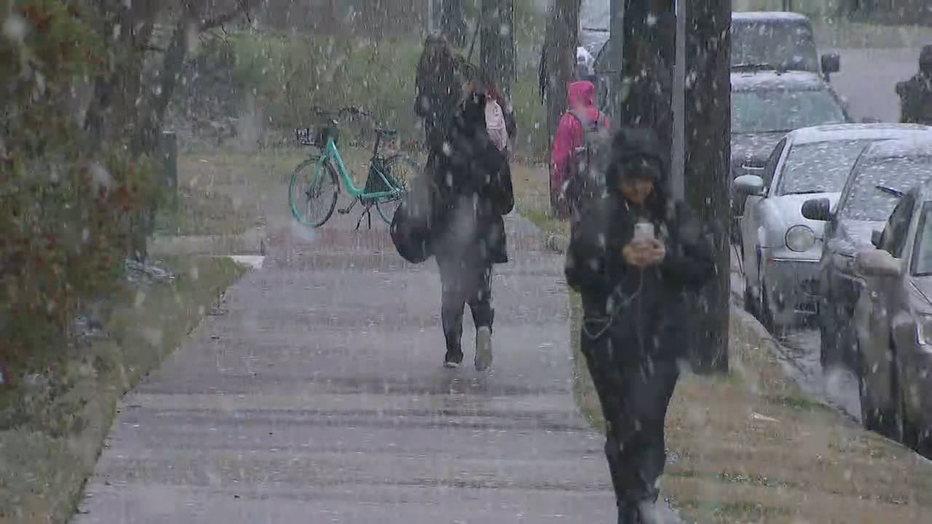 “So, going to work, worked all day, now the snow wants to hit. Off work, of course that’s what happens, but Texas is crazy, man. Wear shorts one day and now it’s freezing,” Kenneth Kelly said.

Denton County was one of the counties under a Winter Weather Advisory.

Some UNT students echoed the hope that the timing of whatever came their way would mean a day off.

“I was kind of hoping school would be canceled but I’ll take what I can get,” Savannah Koenig said.

One student didn’t exactly bring the proper shoes for snow, and took a tumble.

“I don’t know, I just like, slipped. Fell and was like, ‘I’m going to have to go to this meeting,’ kind of got up and moved on,” Ashley Rodriguez said.

The light dusting came after a couple days of near spring-like temperatures.

“Since it is Texas, we have three-different coats by the end of the door. We have a light coat, a raincoat and a heavy coat. We just don’t know which one to put on until we see the weather outside,” Ron Drayovitch joked.

“Yeah, hoping to get a little more so I can build a snowman,” Alissa Garcia said.

There probably wasn’t enough for a snowman, but many in Denton still enjoyed it.

But the concern overnight is freezing temperatures, possibly turning patches of standing water into patches of ice.

As for the snow, it appears to be here today, but gone tomorrow.

SNOW WEST OF THE METROPLEX

The largest amounts of snowfall were well west of Fort Worth, with cities like Wichita Falls getting a couple of inches of snow overnight.

It snowed much of the day in Jacksboro, about 80 miles northwest of Fort Worth.

Classes were canceled there Wednesday, and will remain canceled Thursday, but some nearby school districts have decided to reopen after being closed on Wednesday.

Emergency officials are monitoring the roads

As the temperatures dip into the 20s overnight, drivers have to watch out for patches of ice forming, and they have go slower than usual.

School closures are a pastime most Texas children rarely get the chance to enjoy.

Savannah Thompson and her Jacksboro High School classmates welcomed temperatures in the 20s with open arms on Wednesday afternoon.

The streets of Jacksboro were largely quiet.

City and county offices, as well as schools, remained closed as snowfall went from a light dusting to heavy flakes.

Rodriguez said he had to tread carefully driving to work Wednesday morning to avoid patches of ice.

“Well, I work as a mechanic, so you know, it’s just inside. And it was pretty slow,” he added.

“Just a lot of snow, a lot of sleet this morning,” he said.

And while major traffic issues have been minimal, he warned that could change as temperatures dip below freezing Wednesday night.

“Based on what we’ve seen on the roads, being a little moist, we should see some black ice, and I would just caution drivers just to slow down and take it easy,” Hefner explained.

He thanked TxDOT for keeping the main highways clear so families could spend their snow day together safety.

Fort Worth ISD and other districts remain open

Kids are going to school in most places. The districts are just reminding them to bundle up since temperatures are in the 30s.

Students in the Fort Worth school district didn’t get a snow day, though.

“Last night my mom was like, ‘If there’s ice on the roads we’re not going to school because I’m not messing up my new car.’ And I was like, ‘Yes!’ And then when I woke up this morning... she woke up my sister at like 5:30 a.m. and that was the point I was like, ‘Oh no! I have to go to school today,’” said Savannah Erwin, who attends Charles Nash Elementary School.