Hundreds of people gathered outside Pike Park in Downtown Dallas as the city unveiled a statue dedicated to 12-year-old Santos Rodriguez, who was killed by a Dallas police officer nearly 50 years ago.

DALLAS - Hundreds of people gathered outside Pike Park in Downtown Dallas Saturday as the city unveiled a statue dedicated to a 12-year-old boy who was killed by a Dallas police officer nearly 50 years ago.

Bessie Rodriguez stood right before it and placed flowers at the statue as people came out to honor her son, Santos Rodriguez. His statue is visible for anyone to see.

Nancy Vasquez, who was 14 years old at the time of Rodriguez’s death, recalls seeing the boy’s body.

"And I told my mom they’re having his viewing at Cortes Funeral Home here on Harwood, where now all the big buildings are," she recalled. "Then I knew it was for real. I knew it wasn’t a dream, it wasn’t a nightmare."

She remembers protesting, with many others, in the streets of Dallas.

"The murder of Santos Rodriguez was a shame on our city," Dallas Mayor Eric Johnson said.

Back on July 24, 1973, Rodriguez and his brother were picked up on suspicion of stealing $8 from a vending machine.

Rodriguez was handcuffed in the back of a police car.

Officer Darrell Cain, while trying to get the 12-year-old to confess, held a revolver to the boy’s head and pulled the trigger on an empty chamber.

Rodriguez insisted he was innocent. The second trigger pull was a live round, and a fatal shot to the head.

Officer Cain, who said he thought the gun was not loaded, served two-and-a-half years of a five-year prison sentence for murder.

"The shame comes from the unbearable pain and suffering caused by someone who many years ago was wearing my uniform," said Albert R. Ramirez, with the Dallas Police Department. 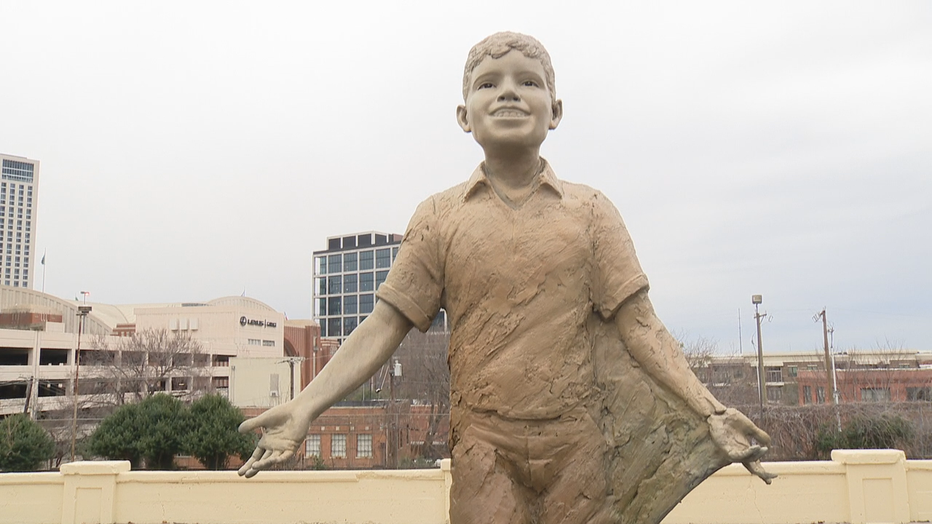 A few hundred people gathering to unveil the statue at Pike Park Saturday, at the place where Rodriguez used to play.

"It doesn’t show him in the back of a car, with handcuffs and blood coming from his head. It shows him as a child who loved to play," Olinka Green said. "He’s captured in that moment in time, that’s pure innocence, before everything else happened to him and it’s good."

"When I see the image of Santos, I see myself. I see every Latino boy who calls Dallas home," Dallas City Councilman Jesse Moreno said.

"This fixes nothing. Art doesn’t provide answers, but hopefully it causes us to ask the right questions," artist Seth Vandable said.

Rodriguez’s death sparked many questions and what-ifs from across the country back in the 70s.

A statue doesn’t right a wrong, but some hope it’ll allow Dallas to never forget the story of Bessie Rodriguez’s boy.

"She’s a strong woman to carry on every day," Vasquez said.