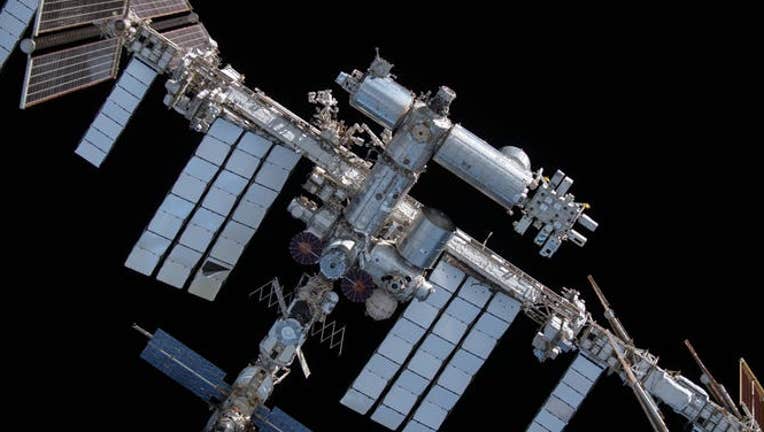 In early November 2021, Crew-2 ESA astronaut Thomas Pesquet photographed the space station from above during the return trip home aboard the SpaceX Crew Dragon Endeavour (NASA/ESA/SpaceX)

In response to Russia's invasion of Ukraine, President Joe Biden announced new sanctions Thursday targeting the Russian economy and attempting to cut off access to emerging technology, which could impact the Russian space program, Roscosmos.

"Between our actions and those of our allies and partners, we estimate that will cut off more than half of Russia's high-tech imports and will strike a blow to their ability to continue to modernize their military," Biden said Thursday. "It'll degrade their aerospace industry, including their space program, and hurt their ability to build ships, reducing their ability to compete economically."

While Russian and U.S. relations have long been strained, the International Space Station where astronauts from America, Japan, Europe and Russia all work and live has been a successful collaboration over the past 20 years.

RELATED: Ukraine invasion: What to know as Russian forces head toward Kyiv

When the space shuttle program ended in 2011, NASA paid Russia approximately $80 million per seat to launch astronauts to the ISS and bring them home. Since California-based SpaceX began launching astronauts from Florida in 2019, the U.S. has relied less on Roscosmos for this service.

Biden on Russia-Ukraine invasion: 'Putin is the aggressor' | LiveNOW from FOX

President Joe Biden spoke for the first time since the Russia invasion of Ukraine. Biden highlighted sanctions against Russia and said direct sanctions of Russian President Vladimir Putin are "still on the table."

Bubbling tensions between the U.S. and Russia finally spilled into the natural area of science and space exploration Thursday when Dmitry Rogozin, who oversees Roscosmos, responded to Biden's comments and the new sanctions.

"Do you want to destroy our cooperation on the ISS?" Rogozin wrote in Russian in a series of tweets. "This is how you already do it by limiting exchanges between our cosmonaut and astronaut training centers. Or do you want to manage the ISS yourself?"

"If you block cooperation with us, who will save the ISS from an uncontrolled deorbit and fall into the United States or Europe?"

"I have been broadly in favor of continuing artistic and scientific collaborations, but in the current circumstances, it is hard to see how even those can continue as normal," Johnson said.

Beyond the ISS, the Ukraine crisis is a concern for other spacecraft operators.

SpaceNews reports that the U.S. National Reconnaissance Office, which operates U.S. spy satellites, has warned Russia could disrupt communications and GPS satellites during the conflict.

The State Department declined to comment on the situation when reached via email Thursday.

NASA has yet to respond to Rogozin's comments or issue a statement regarding the International Space Station cooperation.

Read more of this story on FOX Weather.