Footage posted online on Thursday, March 17, shows vast destruction at the site of a theater in central Mariupol, Ukraine, that local officials said was used as a civilian shelter and alleged was bombed by Russia one day prior. (Credit: Azov Battalion via Storyful)

Fighting is raging on multiple fronts in Ukraine, with intense combat underway in the besieged port city of Mariupol — the site of some of the war’s greatest suffering. Ukrainian officials say forces there are battling the Russians over one of the biggest steel plants in Europe. One local police officer says the city has been "wiped off the face of the earth."

Overnight, Ukrainian President Volodymyr Zelenskyy accused the Kremlin of deliberately creating "a humanitarian catastrophe," but he also appealed for Russian President Vladimir Putin to meet with him directly for talks.

Here are some key things to know about the conflict:

What is happening on the ground?

Ukrainian troops were losing control of the key Azovstal steel plant, now damaged and heavily contested, according to an adviser to Ukraine’s interior minister.

"We have lost this economic giant. In fact, one of the largest metallurgical plants in Europe is actually being destroyed," Vadym Denysenko said in televised remarks. 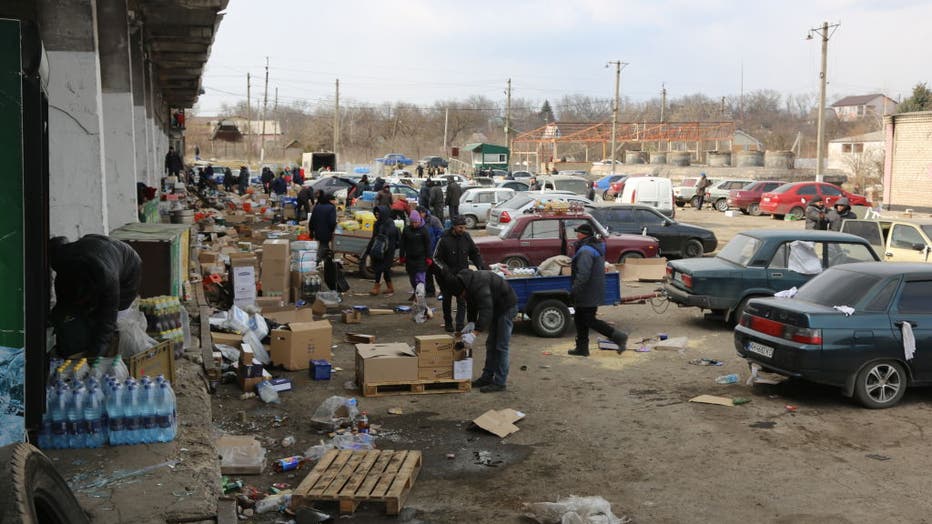 Evacuation of civilians from secure corridors continues in Mariupol, Ukraine on March 18, 2022. A group of civilians were evacuated to other cities in convoys. It was observed that many buildings in the city were damaged in the conflicts between Ukra

An adviser to Ukraine's president said there was no military solution for Mariupol, saying the nearest forces able to assist were already struggling against Russian forces at least 100 kilometers (60 miles) away.

In a video post from a rubble-strewn street, which was authenticated by The Associated Press, Mariupol police officer Michail Vershnin pleaded to Western leaders for help, saying: "Children, elderly people are dying. The city is destroyed and it has been wiped off the face of the earth."

In a statement, the Mariupol city council said Russian soldiers have forced several thousand residents — mostly women and children — to leave and be relocated to Russia. It didn’t say where in Russia and the AP could not immediately confirm the claim.

WHAT IS HAPPENING IN OTHER CITIES IN UKRAINE?

In Mykolaiv, rescuers on Saturday searched the rubble of a marine barracks that was destroyed in an apparent missile attack a day earlier. It isn’t clear how many marines were inside at the time, but a senior Ukrainian military official, who spoke to The New York Times on condition of anonymity to reveal sensitive information, estimated that as many as 40 marines were killed.

The Kyiv regional administration reported that the capital's northwestern suburbs of Bucha, Hostomel, Irpin and Moshchun were under fire Saturday. It said Slavutich, 165 kilometers (103 miles) north of the capital, was "completely isolated."

Thousands of people were able to evacuate along eight of 10 humanitarian corridors Saturday, said Deputy Prime Minister Iryna Vereshchuk. That figure included 4,128 people from Mariupol, who were taken to the southeastern city of Zaporizhzhia.

Three Russian cosmonauts arrived Friday at the International Space Station, and as they floated into it in zero gravity, they were wearing bright yellow flight suits with blue accents. Credit: Roscosmos via Storyful

In Zaporizhzhia, a 38-hour curfew was in effect until 6 a.m. Monday, after two missile strikes on the city's suburbs killed nine people. Local authorities say they continue to evacuate people from areas occupied by Russian troops.

The Russian military reported Saturday that it has used its latest hypersonic missile for the first time in combat. A spokesman for the Russian Defense Ministry, Maj. Gen. Igor Konashenkov, said Kinzhal missiles destroyed an underground warehouse storing Ukrainian missiles and aviation ammunition in the western Ivano-Frankivsk region of Ukraine.

The Pentagon said the U.S. cannot confirm the Russians used a hypersonic missile in the attack.

ARE RUSSIA AND UKRAINE TALKING?

British Foreign Secretary Liz Truss accused Putin of using the talks as a "smokescreen" while his forces regroup. "We don’t see any serious withdrawal of Russian troops or any serious proposals on the table," she told the Times of London.

Meanwhile, Putin spoke by phone Saturday with Luxembourg Prime Minister Xavier Bettel. The Kremlin said Putin "outlined fundamental assessments of the course of the talks between Russian and Ukrainian representatives," and that Bettel told Putin about "contacts with the leadership of Ukraine and other countries."

WHAT ARE WORLD LEADERS SAYING?

China’s vice foreign minister blamed NATO for the war and criticized sanctions against Russia. Le Yucheng said NATO was a "Cold War vestige" and that its expansion could result in "repercussions too dreadful to contemplate" from a major power like Russia.

British Prime Minister Boris Johnson said Russia’s invasion of Ukraine is a "turning point for the world," arguing that victory for Putin’s forces would herald "a new age of intimidation." Johnson said a loss of freedom in Ukraine would mean "the extinction of any hope of freedom in Georgia and then Moldova."

HOW ARE UKRAINIAN REFUGEES FARING?

Thousands of refugees from Ukraine waited in long lines in the Polish capital of Warsaw to receive local identification papers that will allow them to move on with their lives.

Refugees started lining up by Warsaw’s National Stadium overnight to get the coveted PESEL identity cards that will allow them to work, go to school and get medical care or social benefits for the next 18 months.

By mid-morning Saturday, many were told to come back another day because the demand was so high.

Poland has taken in more than 2 million refugees from Ukraine — the bulk of more than 3.3 million people that the U.N. says have fled since Russia invaded Ukraine on Feb. 24. Hundreds of thousands have streamed into Hungary, Slovakia, Moldova and Romania.

A bipartisan delegation of U.S. lawmakers visiting Poland stopped by reception centers Saturday. The seven-member group led by Rep. Stephen Lynch, a Massachusetts Democrat, complimented the willingness of the Polish people to accept refugees. Some Poles have welcomed refugees into their homes.

WHAT IS THE WAR'S TOLL ON CIVILIANS?

The U.N. human rights office says that it has recorded a total of 816 civilian deaths and 1,333 civilian injuries since the war began, though it believes the figures are actually much higher.

Dozens of civilians were killed and injured as a result of attacks over the past 24 hours in the eastern Donetsk region, Ukrainian police said Saturday. At least 37 residential buildings and infrastructure facilities were damaged in attacks on eight cities and villages.

HOW IS THE WORLD RESPONDING TO THE WAR?

The United States and its allies have issued a slew of sanctions aimed at crippling the Russian economy. Hundreds of international companies have announced they are curtailing operations in Russia, and those who remain are under pressure to pull out.

Aid agencies are ramping up their efforts to deliver relief supplies to civilians affected by the fighting and refugees who have fled Ukraine. The Polish city of Rzeszow, about 60 miles (100 kilometers) from the Ukrainian border, has become a humanitarian hub for the region.