Russian forces largely bogged down outside major cities in Ukraine have turned to shelling them from a distance, including dozens of confirmed attacks on health facilities during the war that on Thursday entered its fourth week.

A Russian airstrike before dawn Thursday killed 21 people and destroyed a school and community center in Merefa, near the northeast city of Kharkiv, officials said.

Foreign ministers of the Group of Seven leading economies said in a joint statement that Russian President Vladimir Putin is conducting an "unprovoked and shameful war."

The fighting has led more than 3 million people to flee Ukraine, the U.N. estimates. The death toll remains unknown, though Ukraine has said thousands of civilians have died.

Journalist Mark Savchuk joins LiveNOW from FOX from Kyiv, Ukraine to share the latest on the invasion.

Here are some key things to know about the conflict:

What is happening on the ground?

The World Health Organization has verified 43 attacks on hospitals and health facilities, with 12 people killed and 34 injured, WHO Director-General Tedros Adhanom Ghebreyesus told the United Nations Security Council in a virtual briefing Thursday.

In the besieged southern city of Mariupol, rescuers continued searching for survivors of a Russian airstrike on a theater where hundreds of people were sheltering, local officials said. With communications disrupted across the city and movement difficult because of shelling and other fighting, there were conflicting reports on whether anyone had emerged from the rubble. Video and photos provided by the Ukrainian military showed that the building had been reduced to a roofless shell, with some exterior walls collapsed. Petro Andrushchenko, an official with the mayor’s office, said the building had a relatively modern basement bomb shelter designed to withstand airstrikes.

Snow flurries fell around the skeletons of burned, windowless and shrapnel-scarred apartment buildings as smoke rose above Mariupol's skyline.

"We are trying to survive somehow," said one Mariupol resident, who gave only her first name, Elena. "My child is hungry. I don’t know what to give him to eat." 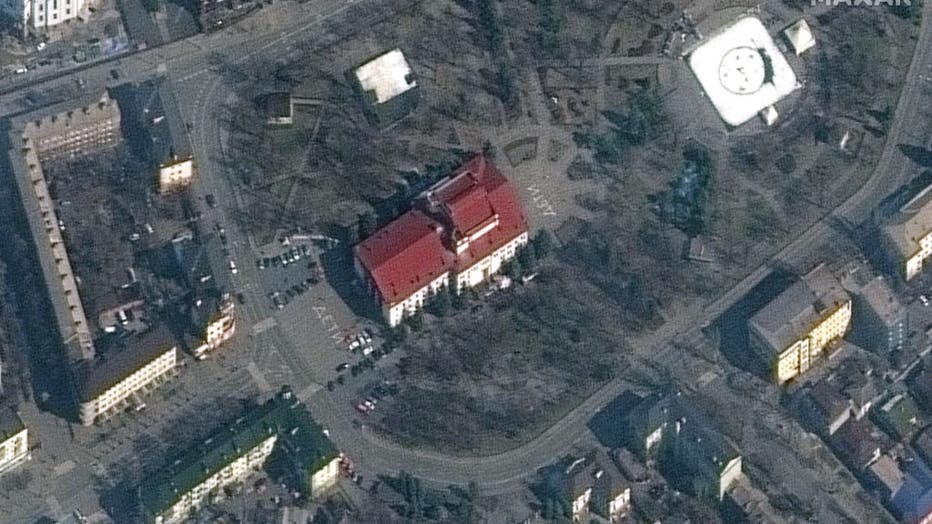 During a video address to German lawmakers, Ukrainian President Volodymyr Zelenskyy condemned Russia for the dire situation in Mariupol, saying: "Everything is a target for them."

Zelenskyy's address was delayed because of a technical problem caused by an attack close to where Zelenskyy was speaking, Bundestag deputy speaker Katrin Goering-Eckardt said.

The governor of the northern city of Chernihiv said it has experienced "colossal losses and destruction" from Russian artillery and air strikes. Viacheslav Chaus told Ukrainian TV on Thursday that the bodies of 53 people had arrived at city morgues over the past 24 hours. A hostel was shelled, killing a mother, father and three of their children, including 3-year-old twins, officials said.

In eastern Ukraine, a municipal pool complex where pregnant women and women with children were taking shelter was also hit Wednesday, according to Pavlo Kyrylenko, head of the Donetsk regional administration. There was no word on casualties.

A fire broke out in an apartment building in the capital, Kyiv, Thursday after it was hit by the remnants of a downed Russian rocket, killing one person and injuring at least three others, according to emergency services. Fighting continued in Kyiv's suburbs, depriving thousands of heat and clean water.

Britain’s Defense Ministry said Russia’s invasion "has largely stalled on all fronts" amid stiff Ukrainian resistance. It said Russian forces have made "minimal progress" on land, sea or air in recent days, and are suffering heavy losses.

Ukrainian forces are using inexpensive Turkish-made drones to carry out lethal attacks on the Russian invaders. 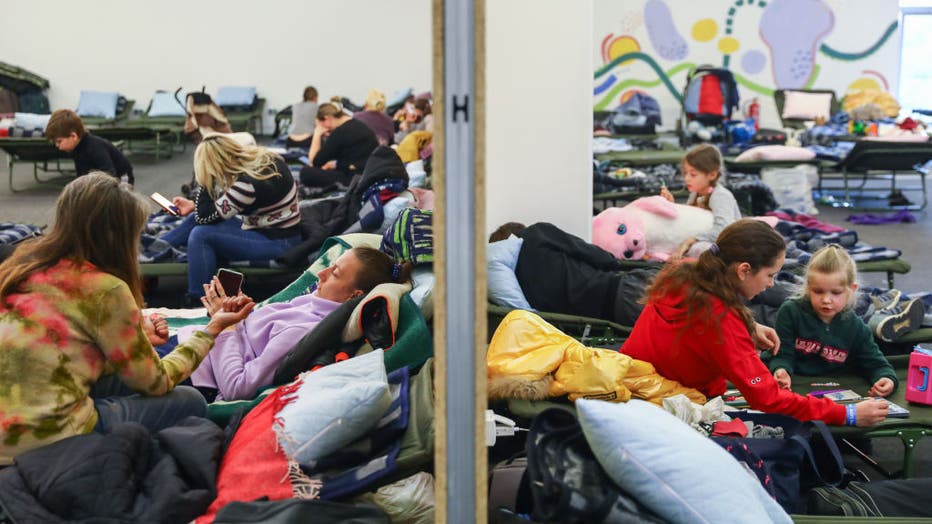 Refugees from Ukraine who arrived to Krakow due to ongoing Russian attacks on Ukraine, are seen at a shelter and the reception point organized in a former building of 'Plaza' shopping mall, in Krakow, Poland on March 16, 2022. Russian invasion on Ukr

What has the AP directly witnessed or confirmed?

The attacks in Mariupol knocked out the windows of apartment buildings and sent smoke rising above the skyline. Cars, some with the "Z" symbol of the Russian invasion force in their windows, drove past stacks of ammunition boxes and artillery shells in a neighborhood controlled by Russian-backed separatists.

In Kharkiv, doctors are struggling to treat COVID-19 patients as the bombs fall outside. Several times a day, air raid sirens wail at a local hospital, sending virus patients — some connected to ventilators and struggling to breathe — into bomb shelters.

"Bombing takes place from morning into night," hospital director Dr. Pavel Nartov said. "It could hit at any time."

Russia is entering its fourth week of attack Ukraine as the death toll and destruction continues to rise. Secretary of State Antony Blinken gave new details about the conflict, including how Russia is setting the stage to use a chemical weapon and then falsely blame Ukraine to create a false narrative and justify use of even more deadly force. Blinken said Russian President Vladimir Putin is also kidnapping local officials and replacing them with puppets and this action will continue to escalate.

How is the world responding to the war?

U.S. President Joe Biden and China’s Xi Jinping are scheduled to speak by phone on Friday. Biden also plans to travel to Europe next week for talks with European leaders about the Russian invasion, and will attend an extraordinary NATO summit in Brussels. NATO has been bolstering its eastern flank with troops and equipment to deter Russia from invading any of its members.

U.S. Secretary of State Antony Blinken said American officials were evaluating and documenting potential war crimes committed by Russia in Ukraine. Blinken said the intentional targeting of civilians is a war crime, for which there will be "massive consequences."

Secretary of State Antony Blinken confirmed that an American citizen was killed in the Ukraine as its war with Russia continues into its fourth week. Blinken did not identify or give any additional details on how the American was killed or where.