Rowlett police are sounding the alert after a very violent attempted carjacking on Easter Sunday.

Thankfully, the dangerous confrontation did not turn deadly.

Rowlett detectives shared surveillance video with FOX 4's Shaun Rabb in hopes that someone can help them catch the guy behind this brutal attack.

This happened at 2 a.m. on Easter, at a 7-Eleven, as two 16-year-olds went to buy something to drink.

As the teens were leaving the store and walking to their car, a man stepped out of the dark, pointed a gun at them, even with other people next to them in the parking lot.

"[The suspect] demanded his keys. The teenager thought it was a joke at first, but then he put the gun on his chest, started to assault him, threw him down on the hood of his car, and he realized then that this was for real, and he was in the fight of his life," Rowlett Police Department Det. Cruz Hernandez explained.

As the two struggled, the teen girl with the victim, not knowing what to do, stood at the back of their car.

The people parked right next to them backed out hurriedly and called 9-1-1 as the kid fought to keep his car keys.

Police are working to identify the suspect, who had on a "just one more chapter" sweatshirt. 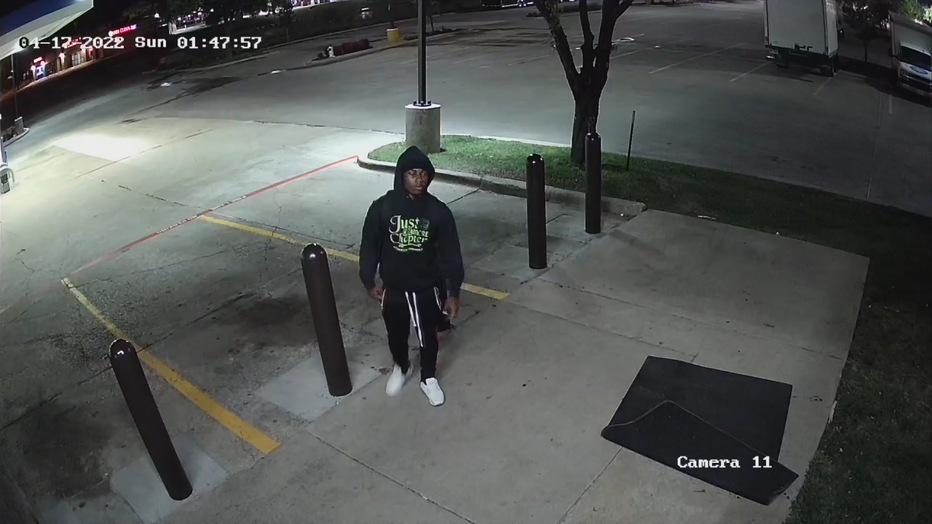 "He grabbed the teen, he slammed him to the ground, the gun came loose. The suspect picked up the gun and begin to pistol whip the male teenager at that time," Det. Hernandez said. "There were people in the parking lot calling 9-1-1, and the gunman ran off in a northeasterly direction."

All of this played out right in front of the 7-Eleven and its cameras.

"The cameras didn't deter him. The camera catches a very deadly confrontation. This criminal here wanted the car and was willing to jeopardize this teenager's life," Det. Hernandez.

Police also said this was the victim’s first time in Rowlett.

"His first time in Rowlett. He came to meet a friend. They met up, they came to this convenience store to get something to drink," Det. Hernandez said.

Rowlett police are hoping someone can help them identify the suspect.

"We got good, clear video of this criminal's face, his clothing very distinctive," Det. Hernandez said. "We need the public's help to identify him. He needs to be identified and he needs to be charged."

Anyone with information is asked to call Rowlett PD at 972-412-6200 or email csawyer@rowlett.com.