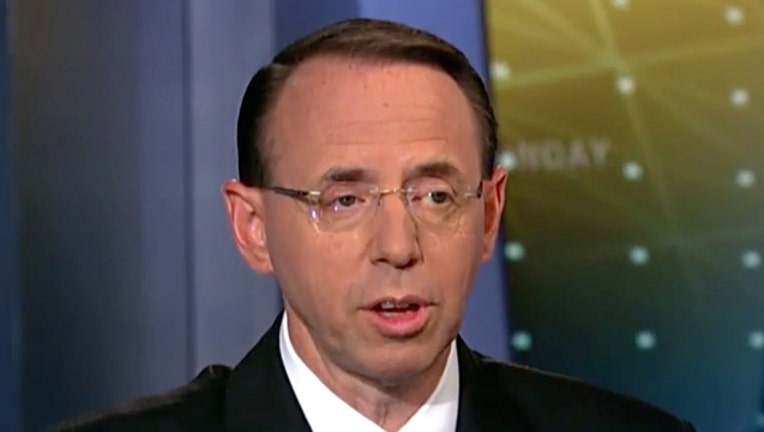 WASHINGTON (AP) - Deputy Attorney General Rod Rosenstein on Tuesday lashed out at Republican allies of President Donald Trump who have drafted articles of impeachment against him, saying the Justice Department won't be extorted or give in to threats.

Rosenstein, speaking at a question-and-answer session at the Newseum, chided the lawmakers who have prepared the document by saying that "they can't even resist leaking their own drafts" and that they lack "the courage to put their name on it."

"I can tell you there have been people who have been making threats privately and publicly against me for quite some time, and I think they should understand by now, the Department of Justice is not going to be extorted," Rosenstein said, in response to a question about news reports on the articles of impeachment.

"We're going to do what's required by the rule of law," he added. "And any kind of threats that anybody makes are not going to affect the way we do our job."

He did not elaborate on what he meant by threats, but some congressional Republicans have excoriated him for his oversight role of special counsel Robert Mueller's investigation into possible ties between the Trump campaign and Russia.

Some lawmakers have blamed Rosenstein and other Justice Department officials for a secret surveillance warrant to monitor the communications of a former Trump campaign associate that they say relied excessively on Democrat-funded political opposition research.

They've also criticized Rosenstein and the Justice Department for what they say is a slow response to lawmakers' demands for documents, including about the now-resolved Hillary Clinton email probe.

Trump has also repeatedly lambasted Rosenstein and Attorney General Jeff Sessions, whose recusal from the Russia investigation laid the groundwork for the appointment of Mueller.

Rosenstein said that while the Justice Department supports congressional oversight, lawmakers must also understand that their duty is not to interfere with ongoing investigations.

"If we were to just open our doors to allow Congress to come and rummage through the files, that would be a serious infringement on the separation of powers," he said. "It might resolve a dispute today, but it would have negative repercussions in the long run, and we have a responsibility to defend the institution."

The Washington Post on Monday reported the articles of impeachment from members of the House Freedom Caucus, a hard-right group of Republican lawmakers. A person familiar with the effort but who was not authorized to discuss it publicly confirmed it to The Associated Press on condition of anonymity Tuesday.

Rosenstein repeatedly refused to discuss Mueller's investigation. He deflected one question about whether he believed the Justice Department can indict a sitting president by noting, generally, the existence of a legal opinion that says the commander in chief may not be charged while in office.

"There's been a lot of speculation in the media about this. I just don't have anything more to say about it," Rosenstein said. "When the issue arose, someone in the department reached a legal conclusion, and that's what it is."

Asked about an FBI raid last month in New York that targeted Trump's personal lawyer, Michael Cohen, Rosenstein said additional safeguards exist when it comes to searching the offices of an attorney, including consultation with Justice Department in Washington.